This comes amid growing concerns over shortage of government beds for Covid care that have arisen in the past month on account of a severe spike in cases in Bengaluru and the rest of Karnataka. 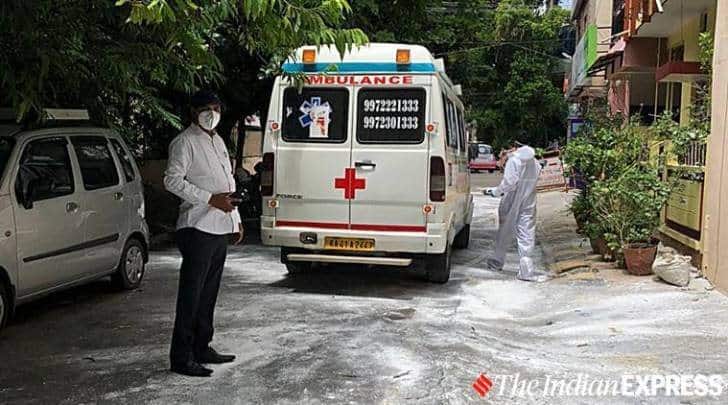 WITH COVID cases rising in Karnataka, the state government on Tuesday re-issued an order from last year in which it sought reservation of 50 per cent of beds in private hospitals for such patients.

The order for reservation of 50 per cent of beds in private hospitals for government-referred Covid patients was re-emphasised through another order issued on Tuesday by Chief Secretary P Ravikumar in his capacity as the chairman of the state executive committee to implement the Disaster Management Act of 2005, which has been invoked for the Covid crisis.

This comes amid growing concerns over shortage of government beds for Covid care that have arisen in the past month on account of a severe spike in cases in Bengaluru and the rest of Karnataka.

“The surge in Covid-19 cases, particularly in the past one month, has necessitated ramping health infrastructure in the state, which has been done on a war footing. There is a need for optimization of existing resources in public health institutions, private hospitals, nursing homes etc for providing effective treatment to Covid-19 infected persons based on severity of the infection/condition in view of increasing number of cases in the state,” said Tuesday’s order.

According to government data, the average daily case count has increased from 754 in the week between March 5 and March 12 to 4,020 in the week between March 29 to April 4. As many as 307 of the 606 Covid deaths this year have occurred in the past one month, according to data from the health department. The number of active cases in the past one week was 46 per cent of the total cases compared to just 22 per cent a week earlier.

Bengaluru is the worst-hit with 183 of the 307 Covid deaths reported in the state in the past one month occurring in the city, including 112 deaths in the past one week.

Data on occupancy of hospital beds in government facilities in Bengaluru shows that only five of 325 beds in the two main Covid-19 treatment hospitals – Victoria Hospital and Bowring Hospital – were unoccupied as of Monday.

In 14 other government hospitals with 862 beds reserved for Covid patients, 680 beds were occupied. And with a fresh surge of 4,266 cases reported in the city on Tuesday, all beds in the 14 hospitals were being allocated, said a medical superintendent of a 150-bed state hospital, which had nine vacant beds on Monday but none on Tuesday evening.

“The number of cases that were seen in a six to eight week period in the first wave has already been reached in four weeks. This shows the need to take the second wave seriously. It is spreading in public spaces as per our data. To overcome the second wave people need to exercise caution and follow norms,” said Dr V Ravi, a member of the Karnataka Covid-19 task force and the state technical committee for Covid-19 issues.

“There are super spreader events that are occurring, especially in closed spaces where people are gathering. There is evidence of that,” said Dr R Giridhar Babu, another member of the state technical committee.

“When cases start increasing there will be a problem for hospital beds and ICU beds. We are seeing it in Bengaluru already. We are reviewing hospital bed availability. We need to be on high alert till the end of May,” Health Minister Dr K Sudhakar said.

Health officials said the state is better prepared in terms of treating serious patients in the second wave on account of most hospitals converting the majority of their regular beds for Covid-19 patients into oxygenated beds following lessons learnt from the first wave – in which it was realised that more than ventilators it was oxygen supply that was crucial to saving lives of people who develop mild to moderate breathlessness.

One of the factors helping the state government at present is the availability of 128 beds (including 99 oxygenated ones) out of 270 given for Covid-19 treatment by five private medical colleges in Bengaluru. This has so far prevented a situation like last year where patients were being shunted around for want of ICU ventilators.

In the months between July and October of 2020, Karnataka and Bengaluru witnessed the worst phase of the first wave of the Covid-19 crisis. An average of 10,000 cases a day was being recorded during the peak of the first wave in the state after the state’s first case was detected on March 8.