Responding to a question on the daily new cases graph that has plateaued over the last two weeks, Dr V K Paul said on Friday that the slow rate of decline was an indicator that the virus could take the “upper hand” if the current situation did not change. With daily case detections still above 40,000 and reports and pictures of blatant violations of social distancing norms coming from tourist spots, the head of India’s pandemic task force has again warned that the second wave of Covid-19 is not over yet, and that cases can explode if people continue to behave recklessly.

Responding to a question on the daily new cases graph that has plateaued over the last two weeks, Dr V K Paul said on Friday that the slow rate of decline was an indicator that the virus could take the “upper hand” if the current situation did not change.

India needed to achieve a “baseline” of 10,000 cases for at least three consecutive weeks before it could be said that the situation was under control, Paul said.

“It is right that the graph (of the decline in the number of cases) has slowed down. It was earlier declining at a faster pace. It only shows that we cannot take the situation for granted. If it is around 35,000-37,000 cases per day, this is almost one-third the number of cases we saw during the first wave peak. The war is not over; the second wave is not over. It is perhaps more visible in some districts and two particular states and the Northeast, but it is still there. As long as this is still rising there, the nation is not safe,” he said.

“With a lot of effort and difficulty, we have reached a situation where cases are on the decline. The situation is bad only in a few districts. But all this can be snatched away from us because we have not contained the virus completely. If we give the virus an opportunity, and chains of transmission are launched…this is something we cannot afford,” Paul said. 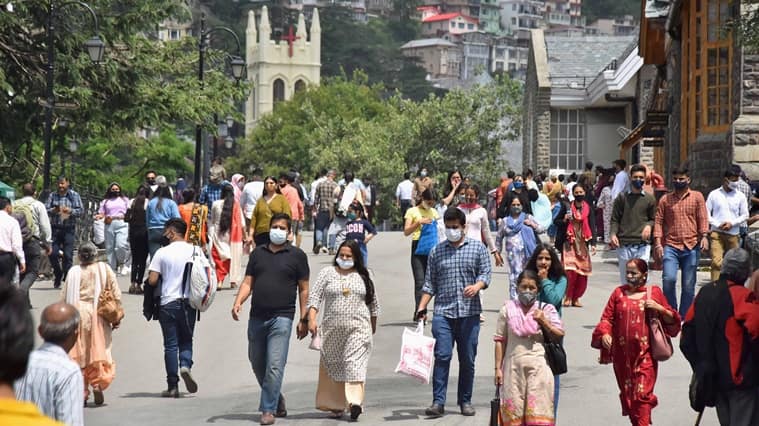 He warned that localised surges were seen after the first wave too, and they could result in an explosion of the infection.

“We have seen in the past that there was predominant localisation of cases in some areas, and then the situation explodes. This is a warning to us that we should help the process of decline of this wave effectively to a much lower level to the baseline. The baseline has not yet been achieved. The baseline would be something below 10,000. This should be for three weeks at least,” he said.

“This shows the second wave is not over; more than 35,000 cases per day is not a small number… It looks small in comparison to the high peak that we experienced, but the fact that the rate of decline is somewhat slow, tells us that if we don’t work hard on controlling the virus, it can take the upper hand,” Paul said.

Paul flagged the blatant violations of Covid norms in several parts of the country, especially at hill stations. Massive waves of tourists have descended on places such as Mussoorie and Manali in recent days.

“Within the country, we are seeing people being complacent. The violations being seen in both small and large cities, the markets…particularly in the tourist destinations, where people are going for relaxation…we can see a new risk emerging there. If this type of mingling continues to take place, and if social distancing norms are violated, the virus can spread…,” Paul said.

“We need to have a balanced approach. There is a need for tourism; however, if there are violations, there could be a serious situation. We can stop this at this moment… This is a cause for concern because of the visuals that are being witnessed, where crowds are mingling, social distancing is not being maintained. This has been highlighted at no lesser place than the Cabinet meeting taken by the Prime Minister yesterday (Thursday),” he said.

“It is the responsibility of the local administration of these tourist places that Covid-19-appropriate behaviour is strictly enforced. The market welfare societies are also responsible… We know that tourism and livelihood are important; however, there cannot be any negligence on Covid-19 norms. Both can mutually exist,” Paul said.

The government pointed out that countries like the United Kingdom, Russia, Bangladesh, South Korea, and Indonesia were witnessing a resurgence of cases. “In the countries where the situation was under control, the virus has freshly re-emerged. These include our neighbours and European countries. If we look at cases per million population, at this stage, it is more than the cases we saw during our (second) peak. The virus returns to infect the susceptible population. This shows that we cannot lower our guard in our country,” Paul said.