Cyclone Yaas is the second cyclonic storm to hit the country within a week after 'Tauktae' barrelled into its western coast, causing death and destruction. 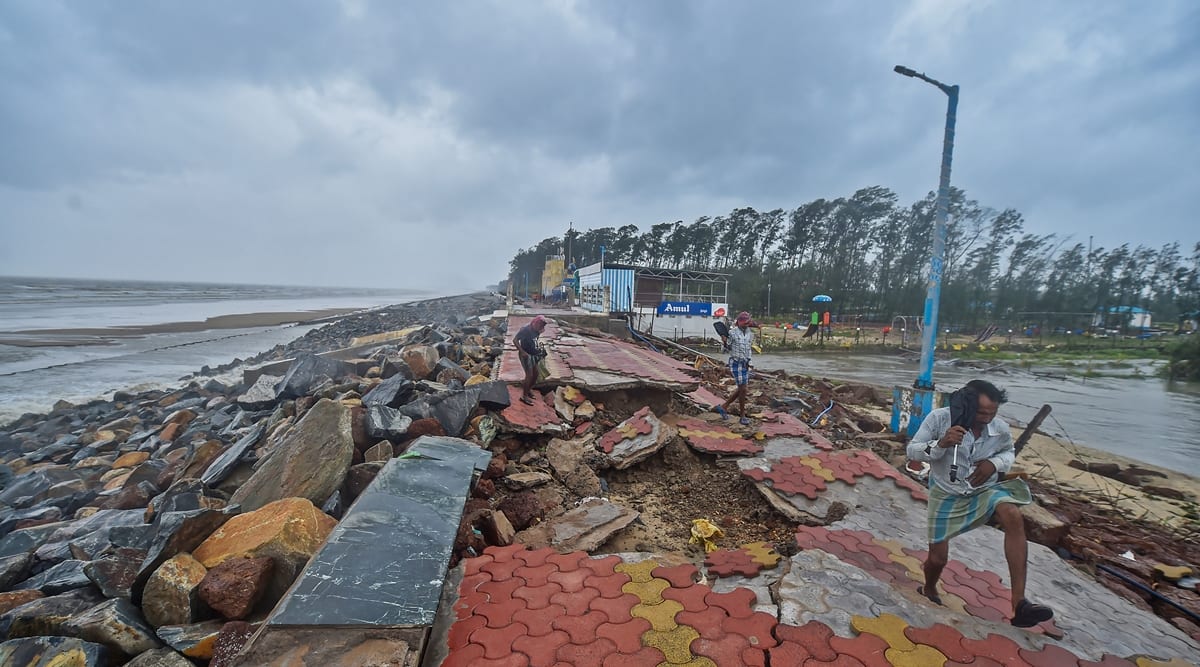 At least four people died as several coastal towns of north Odisha and neighbouring West Bengal were pounded by Cyclonic storm ‘Yaas’ after it made landfall in Odisha on Wednesday morning with a wind speed of 130-140 kmph, gusting to 155 kmph. This is the second cyclonic storm to hit the country within a week after ‘Tauktae’ barrelled into its western coast, causing death and destruction.

Seawater entered several villages in Bahanaga and Remuna blocks in Balasore district, and Dhamra and Basudevpur in Bhadrak district of Odisha, while in Bengal, roads adjoining the sea beaches in Digha were inundated, with visuals showing people wading through chest-deep water.

The storm, which has now weakened into a ‘severe cyclonic storm’, made landfall north of Dhamra in Odisha’s Bhadrak district, the India Meteorological Department said. According to news agency PTI, sea waves were seen touching coconut tree-tops and cars floating in floodwaters during the landfall process of the cyclone.

Reports of two persons dying in Odisha after trees fell on them also emerged, but there was no official confirmation. Another elderly woman in Mayurbhanj reportedly died after her house collapsed. Meanwhile, West Bengal Chief Minister Mamata Banerjee said that a person, who was initially rescued, died “accidentally” later.

While Odisha shifted 5.8 lakh people to safer places, as many as 15 lakh people were evacuated by authorities in West Bengal.

Over 1 crore people affected in Bengal

At least one crore people were affected in West Bengal by rough weather conditions and high tide arising out of the storm. Over three lakh houses suffered damage, CM Banerjee told reporters. Kolkata and some of its surrounding areas were also battered by intermittent rain and gusty wind, with officials on toes to tackle eventualities. Security personnel were deployed at all vulnerable locations in the state to help and rescue people caught in the storm, a senior police officer told PTI.

The state had earlier evacuated over 15 lakh people from vulnerable areas in the state and moved to safer places.

As Cyclone Yaas made its way through the coast, several districts of Odisha received ‘very to extremely heavy’ rainfall, the IMD said.

Chandbali in Bhadrak district recorded rainfall of 288.3 mm over the past 24 hours, followed by Rajkanika in Kendrapara (251 mm), the Bhubaneswar Meteorological Centre said. 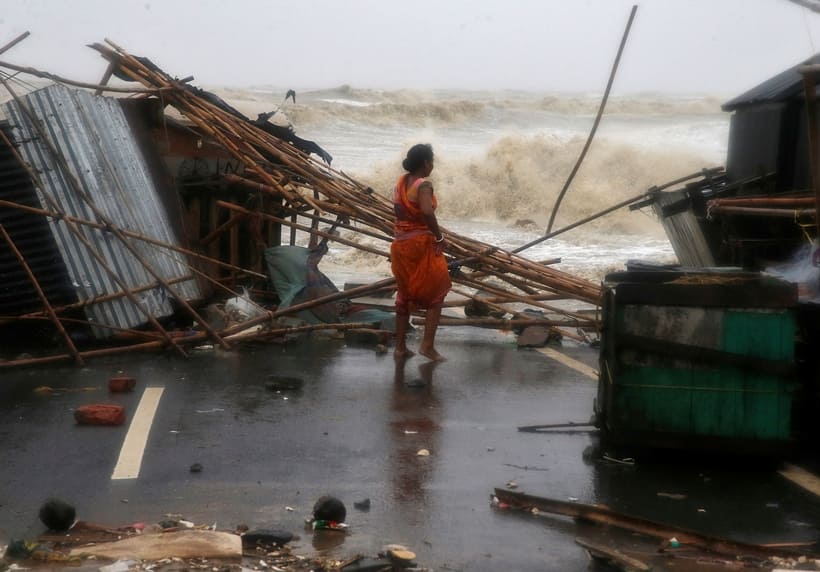 Nawana in Mayurbhanj district received 210.4 mm rainfall, Binjharpur in Jajpur (206 mm), Paradip in Jagatsinghpur (200.3 mm) and Astaranga in Puri (180 mm), it said. The districts of Dhenkanal, Angul, Deogarh, and Sundargarh received moderate rain, while the average precipitation in the Keonjhar district was 44.7 mm, the department said.

The IMD has issued a red warning for nine districts that are expected to receive a downpour in the next 24 hours. As many as 10 persons were rescued by the NDRF, along with the district administration of Jagatsinghpur in Odisha, from a river after their boat capsized, amid rough weather conditions.

In a video tweeted by the Jagatsinghpur district collector, rescue personnel on Tuesday night were seen holding on to an inflatable boat as people disembarked. The rescue effort was also lauded by Chief Minister Naveen Patnaik.

As cyclone Yaas made ways inland, Jharkhand was put on high alert on Wednesday amid the forecast that the storm would be hitting the state by midnight tonight. 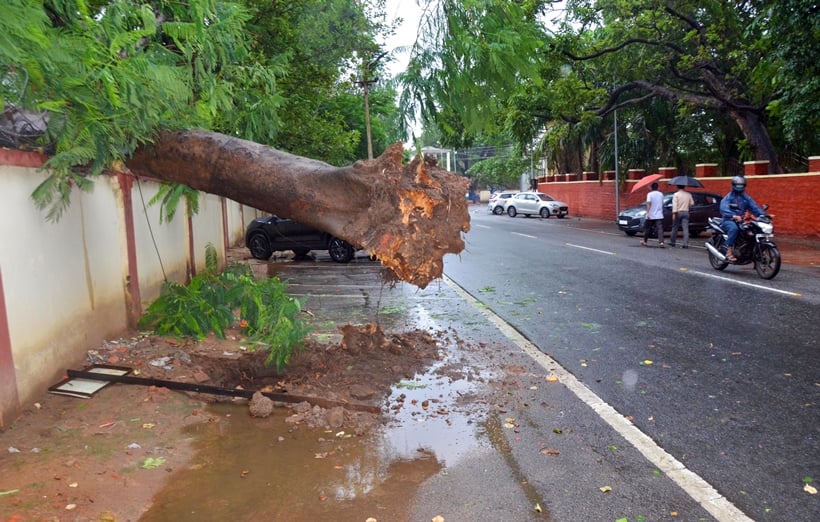 Disaster Management Secretary Amitabh Kaushal told PTI that operations were being executed on war-footing in the vulnerable areas in East and West Singhbhum, besides some other districts, in view of the storm.

Chief Minister Hemant Soren directed officials to be on their toes to deal with any emergency situation. The state has already suspended all Covid-19 related activities till Thursday in some parts of the state in view of heavy rainfall and lightning, besides high-speed wind which is likely to uproot trees. Authorities have been asked to stay alert as cities including Ranchi are likely to be flooded due to heavy rainfall. Forest, Drinking Water and Sanitation, and Electricity officials have also been asked to be on stand-by. A spokesperson for the National Disaster Response Force (NDRF) said the force has so far evacuated thousands of people to safer places in close coordination with local administrations in both Odisha and West Bengal.

“Rescue operations are still continuing as a large number of trees and electric poles are uprooted after the cyclone hit the land,” the spokesperson was quote as saying by PTI. 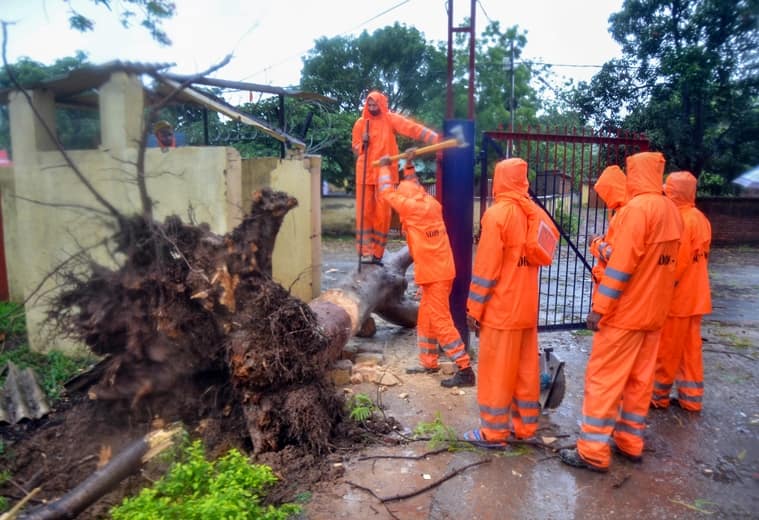 A total of 113 teams were deployed by the force in the two states and adjoining areas for relief and rescue operations.

NDRF officials had also directed its rescue teams to ensure that the country’s major medical oxygen generation plants based in Odisha and West Bengal are “running and alive” during Cyclone Yaas.