On Saturday, Kaur's family and other members of the Sikh community had staged protests outside a court here, alleging that she had been “forcibly married” to a Muslim man. Kaur was later handed over to her parents. 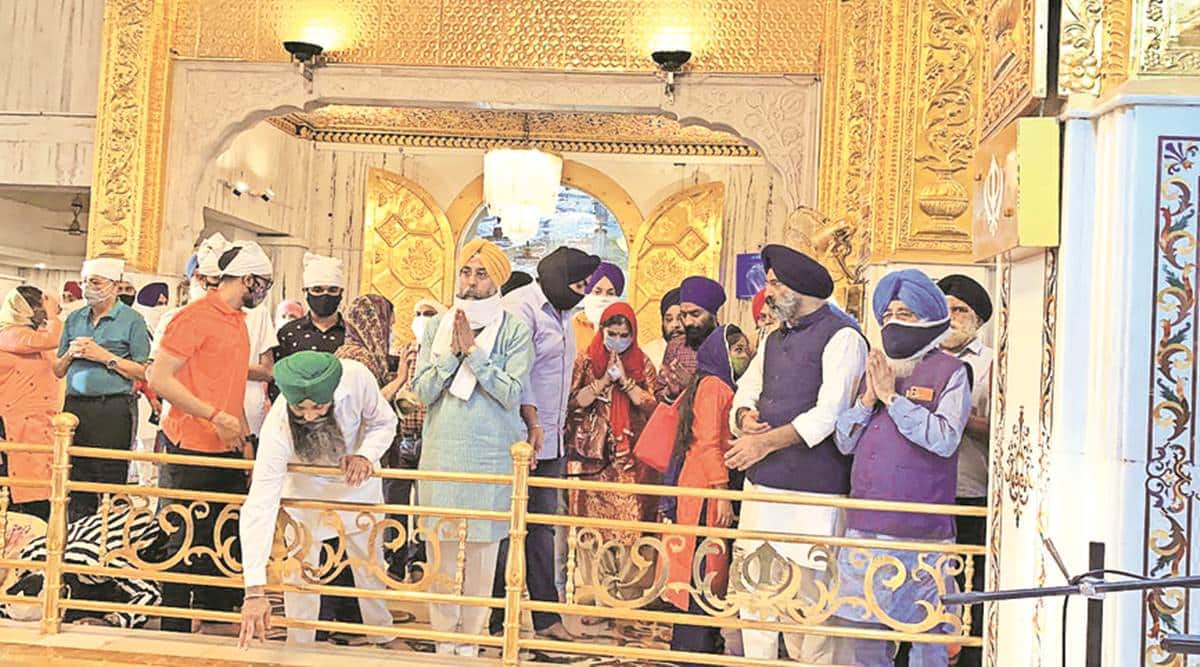 DAYS AFTER an 18-year-old Sikh girl, Manmeet Kaur, was sent back to her family, following allegations that she was “forcibly married” to a Muslim man in Srinagar earlier this month, she was married off to a Sikh man, Sukhpreet Singh, in Srinagar on Tuesday.

The ceremony was held at a gurdwara in Pulwama, after which the couple and their families left for New Delhi.

“They knew each other and there was no coercion or force used,” Paramjit Singh Sarna, Shiromani Akali Dal (SAD) Delhi president, said. Addressing a press conference, Sarna said “though it has been claimed otherwise, there was no previous marriage and the girl was married only today.”

On Saturday, Kaur’s family and other members of the Sikh community had staged protests outside a court here, alleging that she had been “forcibly married” to a Muslim man. Kaur was later handed over to her parents.

While police haven’t made an official comment on the issue, police sources had told The Indian Express that Kaur was presented before the court to record her statement, and she told the magistrate that she had married of her own free will. The family members of Kaur and the Muslim man were not available for comment. Following local protests on Saturday, Sarna and other Sikh leaders, including SAD leader Manjinder Singh Sirsa, arrived in Srinagar on Monday to protest against what they called “forced conversions and marriages” of Sikh girls. Some of them attended the wedding ceremony today.

Sirsa later tweeted a series of photographs of Kaur, with her bridegroom and family. “Paying obeisance at Gurdwara Sri Bangla Sahib with Manmeet Kaur, the Sikh daughter from Kashmir who was forcibly converted. But her family fought for faith and got her back. Manmeet Kaur has come to Delhi to take Guru Sahib’s blessings and thank the Sangat for their support,” he tweeted.

“The situation has cooled down a bit,” Jagmohan Singh Raina, president of the All Party Sikh Coordination Committee in Kashmir, told The Indian Express. “They (Sikh leaders from outside) have left after starting a fire… They made provocative statements. We (local Sikh leaders) will address the media tomorrow,” he said. On Monday, Raina had warned against “interference of outsiders for political interests”.

The Mutahida Majlis-e-Ulema (MMU), headed by Mirwaiz Umar Farooq, said its delegation met local Sikh community leaders as well as SAD leaders to resolve the issue amicably. But it also warned against attempts by “outside elements” to create a rift among communities.

Meanwhile, PTI reported that a delegation of Sikhs met Union Minister of State for Home G Kishan Reddy in the Capital on Tuesday. The delegation included Delhi’s BJP leader R P Singh. “The delegation submitted a memorandum about the alleged forced conversion and wedding of Sikh girls in Kashmir. I will discuss the matter with the Union Home Minister (Amit Shah) about the action that is required to be taken,” Reddy said, according to the report.

Earlier, Sirsa had alleged that four Sikh women were forcibly converted and married in Kashmir recently. But local Sikh leaders said they were aware of only two such cases – last week’s incident, and an old case dating back to 2012. A purported video clip of the old case was circulated on social media on Monday. In the clip, the woman, identifying herself as Danmeet, said she converted in 2012 and married of her own free will in 2014.

Another Sikh woman, Viron Pal Kaur (Khadeeja), and her husband Manzoor Ahmad Bhat have approached the J&K High Court seeking protection. The woman has said that she converted and married of her own free will earlier this year, and sought protection against any coercive action by her family and police.

While the court has listed the case for July 1, it has directed the police to ensure that the petitioners are “not harassed/ attacked/ kidnapped or caused any harm by respondent number 6 and 7 (the woman’s parents) or by anyone on their instance and they shall be allowed to live their married life in the way they like…”