A strong link with senior Rashtriya Swayamsevak Sangh functionaries may have enabled Jagdeep Dhankar to secure the National Democratic Alliance nomination for the vice presidential election.

In the first week of July, when the RSS’s annual Akhil Bharatiya Prantiya Pracharak Sameelan was to be organised, Indresh Kumar and Kamlesh Singh saw to it that the conclave was organised in Jhunjhunu, the home district of Jagdeep Dhankar, who belongs to Kithana village near Jhunjhujnu.

RSS Sarsanghchalak Mohan Bhagwat was convinced that the conclave should be organised in the Shekhawati region of Rajasthan where the BJP is relatively weak.

It was felt that holding the RSS conclave in Jhunjhunu would help the BJP perform well in next year’s Vidhan Sabha election in Rajasthan.

During the three-day meeting in Jhunjhunu, Bhagwat and 20 top RSS leaders stayed at Dhankar’s farmhouse.

Though Dhankar was not present in Kithana during the RSS conclave, he invited Bhagwat to stay at his farmhouse in Kithana.

Dr Sudesh Dhankar, Dhankar’s wife, was present in Kithana to look after the RSS guests during the three days.

Sources in Rajasthan confirm that the die was cast in Dhankar’s favour during the Jhunjhunu conclave.

Dhankar was one of Indresh Kumar’s lawyers when the RSS leader was named an accused in the 2010 Ajmer bomb blast case.

Dhankar, who had joined the BJP in 2003, was keen to be elected to the Rajya Sabha, but his ambition was thwarted by then chief minister Vasundhara Raje, who has always opposed him.

Five years ago when M Venkaiah Naidu, who was then a member of the Rajya Sabha from Rajasthan, was nominated for the vice presidency, Dhankar tried to contest the by-election caused by Naidu’s resignation after he was elected vice president, but Vasundhara did not allow Dhankar’s plans to succeed.

A disillusioned Dhankar then decided to concentrate on his flourishing law practice.

When the BJP was looking for a suitable person to be sent to West Bengal as governor, Indresh Kumar and Kamlesh Singh suggested Dhankar’s name to Home Minister Amit Anilchandra Shah.

It was argued that Dhankar was well-versed with Constitutional laws and would be able to check West Bengal Chief Minister Mamata Banerjee, who was at loggerheads with the Centre.

Dhankar was reluctant to take the gubernatorial position, but he was persuaded to move to Kolkata’s Raj Bhawan.

He consistently picked up cudgels against Banerjee who, after several skirmishes, insisted that the Centre recall the governor.

When Mukhtar Abbas Naqvi’s name was floated as Naidu’s successor as vice president, the RSS instead suggested Dhankar, indicating that he was also Bhagwat’s choice.

On Friday, July 15, Assam Chief Minister Himanta Biswa Sarma and Dhankar reportedly met Banerjee at Darjeeling’s Raj Bhavan and informed the chief minister that the governor was the NDA candidate for vice president.

On Saturday, July 16, the BJP Parliamentary Board met in New Delhi and declared Dhankar’s candidature for the vice presidency.

The BJP believes Dhankar’s elevation will give the party electoral benefits in Haryana, Rajasthan and western Uttar Pradesh.

Dhankar is from the Jat community and the percentage of Jats in Haryana and Rajasthan is above 12 percent of the population in those states. 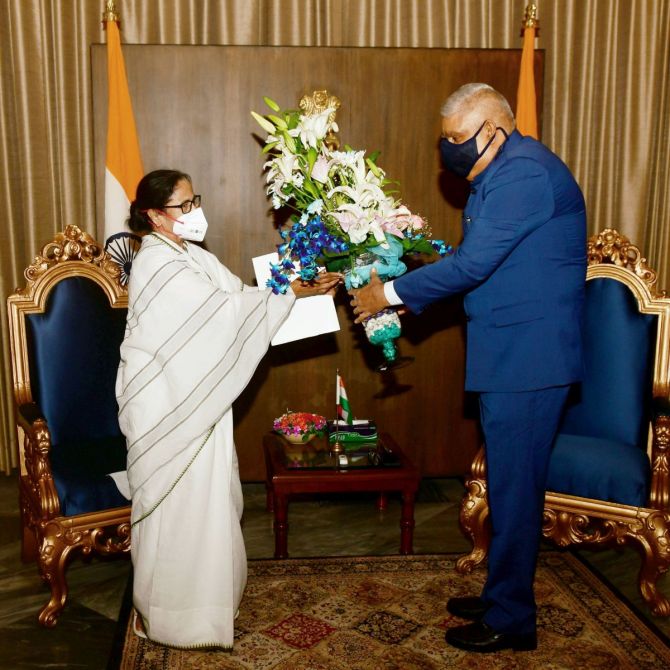 Dhankar made his debut in the Lok Sabha in the November 1989 election when Devi Lal fielded him as the Janata Dal candidate from Jhunjhunu.

After the Vishwanath Singh government fell a year later, Dhankar was appointed minister of state for parliamentary affairs in the Chandra Shekhar government.

He quit the Janata Dal, joined the Congress and was elected to the Rajasthan assembly from Kishangarh.

In his political career, Dhankar has won one Lok Sabha election and one assembly election. As a Congress candidate, he lost two Lok Sabha elections and these losses prevented him from becoming an effective Jat leader.

Dhankar, who aspired to be a member of the Rajya Sabha, will now preside over the Upper House as its chairman (the vice president of India is also the chairman of the Rahya Sabha).

Interestingly, both Houses of Parliament will now be presided over by individuals from Rajasthan.

The vice presidential election on August 6 has another association with Rajasthan. Dhankar’s opponent Congress veteran Margaret Alva is a former governor of Rajasthan.