‘It is time to use the Indian military’s decades-long expertise in fighting insurgency successfully,’ advocates Colonel Anil A Athale (retd). 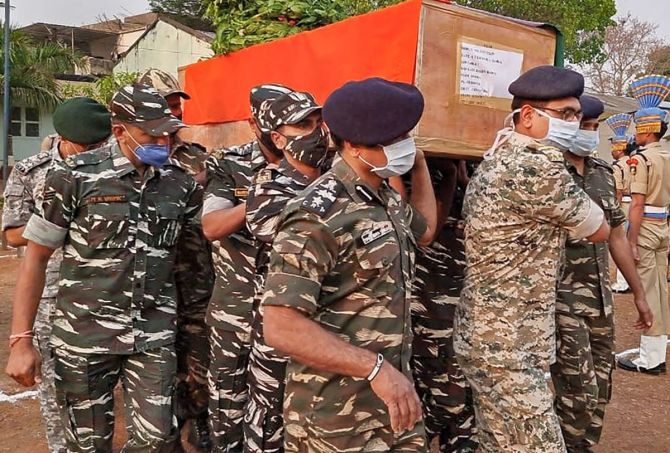 The longest 500 metres distance in India is between North Block and South Block in Delhi.

The twins just do not meet when dealing with the menace of Left Wing Extremism.

There is no coordination or learning from each other. The home ministry and the central paramilitary forces dealing with the Naxalite threat have been living and operating in a silo that is impenetrable by common sense.

At the current rate of ‘success’, one wonders if we will win this war even by 2047 when we complete the centenary of Independence.

The April 4, 2021 attack by the Naxalites in the Sukma district of Chattisgad resulted in 22 policemen being killed.

Around 400 Naxalites executed an ambush on a section of a divided police force numbering around 1,100. The ambush site was in an open area and not thick jungles.

This ought to raise several red flags.

How did such a large gathering of Naxalites escape surveillance devices?

Why could a numerically larger and better-equipped force not counter a smaller Naxalite unit?

The leadership failure is so obvious that it needs no repetition of an old adage, ‘There are no good or bad battalions, only good or bad officers’.

In a similar incident on April 6, 2010, the Naxalites killed 73 paramilitary jawans.

This year’s attack around the same time is a grim reminder that the Naxalite menace is far from over.

Such is the strength of the Indian Police Service lobby that neither that 2007 attack nor the latest one resulted in any heads rolling nor a major re-think, that is so necessary. The home ministry silo remains unbreached. The time has come to conduct a thorough review of our strategy to deal with the Naxalite menace.

Imagine if such an incident was to take place in Kashmir. After the Uri terror attack in September 2016 and the Pulwama terror attack in February 2019, we revised our basic strategy of defence to offence.

The resultant change saw surgical ground strikes and an airstrike on terrorist bases. It is time we remove the constraints on the use of force against the Naxalites as well.

The first logical step in this direction is to break the silos between the ministry of defence and armed forces and the home ministry and paramilitary forces.

Let the Naxalite problem be dealt as a ‘national problem’ and not as a home ministry or police monopoly.

The initiative to end the ‘turf battles’ must come from the very top.

It is time to use the Indian military’s decades-long expertise in fighting insurgency successfully in Nagaland, Mizoram, Kashmir and Sri Lanka.

I am well aware that a beginning was made by establishing a counter-insurgency and jungle warfare school in Kanker with the army’s help. But that has not been enough.

I visited the Naxalite affected areas in Chhatisgarh in 2006 and made recommendations in areas of psyops.

The first and foremost task is to establish the government’s writ in the affected areas. Currently, that presence is thin and in many areas, the tribals think that the Naxalites are the government. 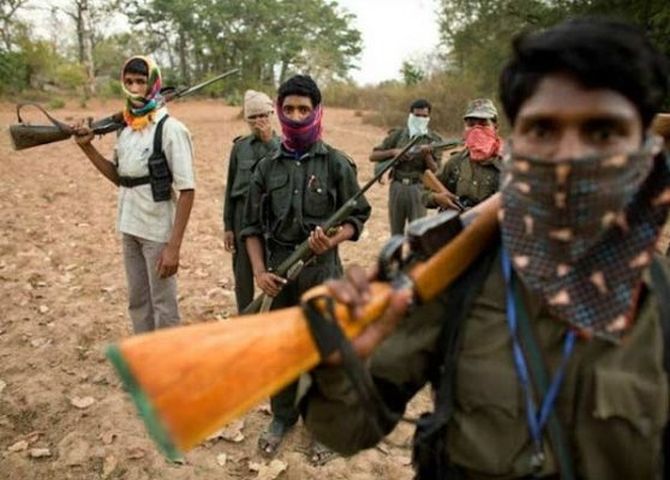 Many so-called experts have been repeating the mantra of the WHAM strategy — Winning the Hearts And Minds.

There is more to it than merely building schools, providing electricity, roads and hospitals.

The Naxalites well understand this and have had no qualms in attacking and destroying the very infrastructure of development.

They have more than once made clear that their aim is not the welfare of the tribals, but bringing about a revolution in the country to overthrow the current Constitution and State to be replaced by a Communist one-party State.

It is a gross failure on part of the political forces to be able to convey this Naxal perfidy to the tribals.

Else, how would 400 odd tribals gather together to help the Naxals in attack on the police forces!

The very first step in this exercise is to break the silo mentality and have extensive consultations between army experts in counter-insurgency and the police leadership.

Will North and South Block talk to each other at least now? For on this hinges the answer to the question of how best to defeat the Naxalites. We owe it to the victims of the Sukma massacre.