Satellite pictures have revealed what appears to be an ongoing Chinese project to prepare vast new fields of missile silos that could possibly be used to launch nuclear weapons at China’s adversaries, including the United States and India. Why is China digging these silos? 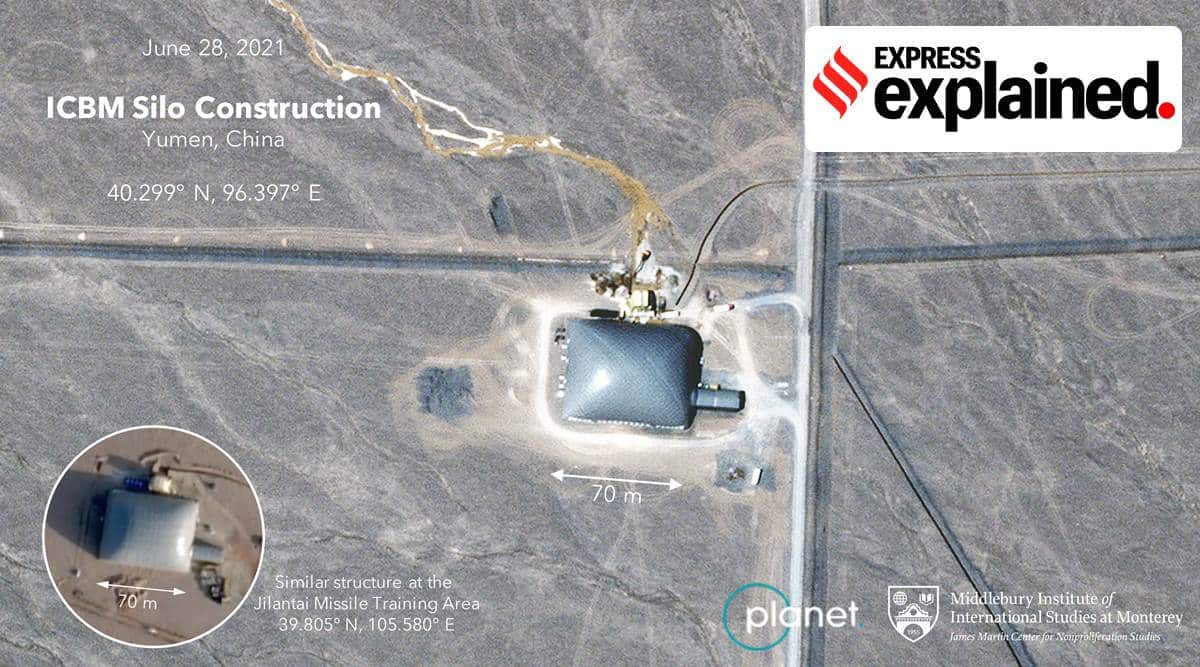 Satellite images have revealed that China is building at least three missile silo fields in Yumen in Gansu province, near Hami in Xinjiang province, and at Hanggin Banner, Ordos City, in Inner Mongolia.

It appears that China is constructing around 120 missile silos at Yumen, around 110 silos in Hami, and 29 in the Hanggin Banner field. Earlier this year, 16 missile silos were detected in the People’s Liberation Army Rocket Force’s (PLARF) Jilantai training area, also in Inner Mongolia.

The Yumen field was discovered by commercial satellite images obtained by researchers at the James Martin Center for Nonproliferation Studies, California; the Hami field was identified by nuclear experts at the Federation of American Scientists (FAS) using Planet Labs satellite images; the Hanggin Banner field was discovered by researchers at the China Aerospace Studies Institute, Washington DC.

The Yumen and Hami fields are identical, and the silos are positioned in a perfect grid pattern, roughly 3 km apart. Some of the silos have dome shelters. The fields are supported by nearby PLARF facilities.

For several decades before these discoveries in 2021, China operated only 20 missile silos for its DF-5 liquid-fuel intercontinental ballistic missile (ICBM). On completion of the ongoing work, China could have 250-270 new missile silos, more than 10 times the number it had maintained for several decades.

Why is China building missile silos?

There could be three explanations.

FIRST, some Chinese political scientists believe this could be China’s attempt to move towards a launch-on-warning (LOW) nuclear posture. LOW refers to a launch at an adversary on detection of an incoming missile before the adversary’s missile hits its target.

China’s nuclear strategy has remained largely unchanged since 1964, when it first exploded a nuclear device. It is based on achieving deterrence through assured retaliation. The crucial requirement for this is the survivability of China’s nuclear arsenal following the first strike — conventional or nuclear — by an adversary. In order to move to the LOW posture, China would have to mate a few warheads with missiles, and keep them in alert status for a quick response. Currently, China stores its warheads and missiles in a de-alerted status separately under different commands.

The 2013 Science of Military Strategy document of the PLA Academy of Military Science noted that China “can” LOW, and the Defence White Paper published by China in 2015 mentioned “rapid response”. Admiral Charles A Richard, Commander of the US Strategic Command (Stratcom) said in his testimony to Senate in April 2021 that “a portion of China’s force has already moved to a LOW posture”.

However, silos alone, at such an early stage of construction, are not conclusive evidence of China’s move to LOW. SECOND, it enables China to achieve its goal of increasing its nuclear warhead stockpile.

China currently has around 350 nuclear warheads. Hans M Kristensen and Matt Korda of the Nuclear Information Project of the nonprofit FAS have estimated that 272 of these 350 warheads are assigned to operational forces; the remaining 78 have been produced for China’s new DF-41 solid-fuel road-mobile ICBM.

China has around 150 land-based missiles that can deliver between 180-190 nuclear warheads to some parts of the United States. If all the new silos are loaded with a single-warhead missile, the count would increase to 410-440. If the silos on completion are loaded with the DF-41s, which can carry up to two-three warheads per missile, this count would rise to 930-940 warheads.

For this, China would have to increase the number of DF-41s in its inventory, and almost triple its nuclear warheads — unlikely in the immediate future. However, the construction of the silos does indicate an increasing trend in China’s nuclear warheads and DF-41 missiles going forward.

The THIRD guess is that China could use these silos as decoys.

Chinese scholar Tong Zhao of the Nuclear Policy Program at the Carnegie Endowment for International Peace in Beijing has argued that China worries about the improvement in US missile defence systems and conventional precision strike weapons, which could undermine China’s nuclear deterrence. He has claimed that at the National People’s Congress in March 2021, President Xi Jinping directed the military to “accelerate the creation of advanced strategic deterrent” capabilities.

The recently discovered silos could be an initiative to enhance deterrence by keeping the adversary guessing. This could be China’s shell game — where one, some, or all silos could have missiles, forcing the aggressor to target all of them during an escalation. The aggressor would have to waste more warheads or precision-guided weapons to destroy only a few missiles, or perhaps target empty silos.

This would be a cost-effective strategy for China, and could also bolster its image as serious nuclear power and an equal to the US.

How has the US reacted to the discovery of the silos?

On July 28, Stratcom retweeted a report on the silos in The New York Times, saying: “This is the second time in two months the public has discovered what we have been saying all along about the growing threat the world faces and the veil of secrecy that surrounds it.”

In his April Senate testimony, Adm Richard had said China is deploying ICBM silos on a large scale. It is likely Stratcom knew about China’s construction of the silos before they were discovered last month by scholars using satellite pictures. After the discovery of the Yumen field in the first week of July, a State Department spokesperson had said: “The PRC’s nuclear arsenal will grow more quickly, and to a higher level than perhaps previously anticipated. This buildup is concerning. It raises questions about the PRC’s intent.” A Pentagon spokesperson told The Washington Post at the end of June that “Defense Department leaders have testified and publicly spoken about China’s growing nuclear capabilities, which we expect to double or more over the next decade.” The US Department of Defense’s 2020 China Military Power Report projected China’s nuclear warhead stockpile, currently estimated in the low 200s, to at least double over the next decade.

And what has China said?

Neither the Chinese Ministry of Foreign Affairs nor the Ministry of National Defence has reacted. Some Chinese media have said the silos are wind farms, and accused American academics and journalists of spreading a “China threat theory”.

So should India be concerned?

Seen in isolation, these silos appear to be built specifically to enhance deterrence against the US.

But broadly, India should be watchful about China’s nuclear ambiguity and its latest DF-26 intermediate-range road-mobile dual-use missiles — of which 16 launchers were deployed in Korla, Xinjiang, during the ongoing standoff. India could be a potential target given the strike ranges of these missiles and the timing of deployment.

Although both China and India have pledged nuclear ‘no first use’ doctrines, India’s modest ballistic missile defence capabilities and China’s nuclear ambiguity are matters of concern for India.

What should the world do about these developments?

There isn’t an obvious option for the US or anyone else. China has stated that it will not join the NEW START (Strategic Arms Reduction Treaty). Fu Cong, Director-General of the Department of Arms Control of the Chinese Foreign Ministry, recently said that the US and Russia have almost 20 times more nuclear warheads than China, and that “It is unrealistic to expect China to join the two countries in a negotiation aimed at nuclear arms reduction.”

Several American arms control scholars have argued for a renewal of the US government-funded US-China track 1.5 nuclear dialogue that was suspended after 15 years in 2019 due to growing friction, “declining value”, and the failure to launch track 1 dialogue. Some others have said that the US’s newer missile defence capabilities disturb strategic stability and complicate arms control.

SUYASH DESAI is a research associate working on China’s defence and foreign policies at The Takshashila Institution, Bengaluru. He also writes a weekly newsletter on the Chinese People’s Liberation Army called ‘The PLA Insight’.