The Surat Municipal Corporation (SMC) Saturday declared two apartments as ‘restricted zones’, after nine Covid-19 cases each from Megh Mayur apartment in Athwalines area and Sumeru Silver Leaf apartment in Paal area were detected. All these people, except for two children, were fully vaccinated when they were diagnosed with Covid 19.

Over what period were the cases detected?

A couple – a 70-year-old man and a 69-year-old woman – who live in Megh Mayur apartments was found positive for Covid-19 around September 18 and hospitalised. The SMC then conducted RTPCR tests through its Dhanvantri raths (mobile medical vans) and found seven other positive cases in the apartment, which has 71 flats and 247 residents. These patients were kept in home isolation and the building was declared a cluster and a restricted zone.

Surat health department officials found that the couple met another couple in Athwalines, aged 45 and 40 years, who had been to a gathering in Palanpur of Banaskantha district held during Paryushan in the second week of September.

In Sumeru Silver Leaf, which has two towers of 88 flats with 242 residents, nine cases of Covid 19 have been detected from September 15 till Monday, two being children aged 14 and 10 years old. Except for the children, the other infected people were fully vaccinated.

Athwa zone medical officer Dr Kalpesh Khatri said that of the nine Megh Mayur cases, three patients were below 36 years of age, including two security guards who supplied milk and vegetables to the senior citizens. The rest are between 65 years and 84 years of age.

In Sumeru Silver Leaf, the first case was of a 40-year-old, followed by her 14-year-old son who has not yet started physical classes at school. SMC Rander Zone medical officer Dr Ketan Garasiya said, “The residents of both towers had celebrated the Ganesh festival with a common pandal in the parking area. We have also come to know that several games were organised during nighttime for children.” 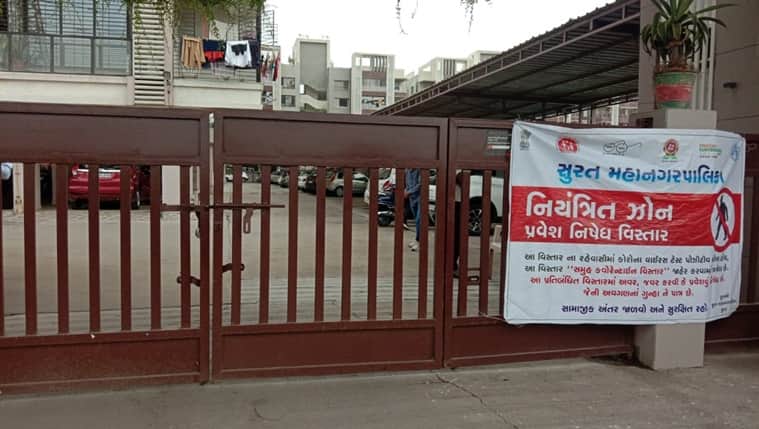 All the nine infected people are under home isolation.

What are the restrictions imposed on these apartments?

Police and security guards of the SMC have been stationed at the access points of these two apartments and entry of visitors and movement of residents is restricted.

SMC deputy health commissioner Dr Ashish Naik said, “The cluster zone restrictions will be in place for 14 days and lifted only after seeing the health condition of residents. During these 14 days, medical teams will visit both the apartments regularly to check the health status of the positive cases and the other residents.”

What was Surat city’s case count till this spurt?

Till Monday, the Surat Municipal Corporation limits had reported a total of 1,11,579 Covid cases. The SMC jurisdiction has been leading the Gujarat dashboard of new Covid-19 cases reported each day since September 21, among all 33 districts and eight municipal corporations in the state. Since September 21, SMC has reported 40 cases of Covid-19.

The SMC has consistently reported new cases each day in the past 90 days. The state health department said it is keeping a “close track” of each new case, ensuring the patients remain in isolation.

The additional chief secretary of the health department, Manoj Aggarwal, said a slight surge from 10-15 cases a day to 25 cases a day is not a matter of concern, as overall testing numbers, at anywhere between 50,000 to 70,000 tests a day, are high in Gujarat.

“Even among the cases testing positive, most are mildly symptomatic or asymptomatic, not requiring hospitalisation. The virus is lying among the population, and if despite so many testing samples, there is hardly any difference in new cases reported each day, the situation is not worrying. Also as long as R0 (a measure of infectivity) is not more than one, it is not of concern. We have also vaccinated a large section of the population — 83 per cent coverage among those eligible of the first dose and 37 per cent of the second dose,” said Aggarwal.

Is the opening up ahead of Navratri a matter of concern?

The health department said that going by the situation at present, it is not of concern, although relaxations in place are “dynamic” and in case of any noticeable reversal in trend, restrictions can always be imposed again.

Gujarat on September 25 announced several relaxations, the major one being permission to celebrate Navratri Garba with up to 400 people in attendance, with the caveat that it can be organised within residential neighbourhoods, societies and apartments and not at commercial venues and party plots.

As many as 400 persons have been permitted to attend weddings, an increase from the earlier limit of 150 people. For last rites, the government has increased the number of attendees allowed to 100 from the earlier limit of 40. Hotels and restaurants can function at 75 per cent capacity till 10 pm, an increase from the current 60 per cent. Night curfew hours in eight cities, including Ahmedabad and Surat, have been relaxed from 12 am to 6 am.