The Gothenburg study used an uncrewed submarine to go under the Thwaites glacier front to make observations. 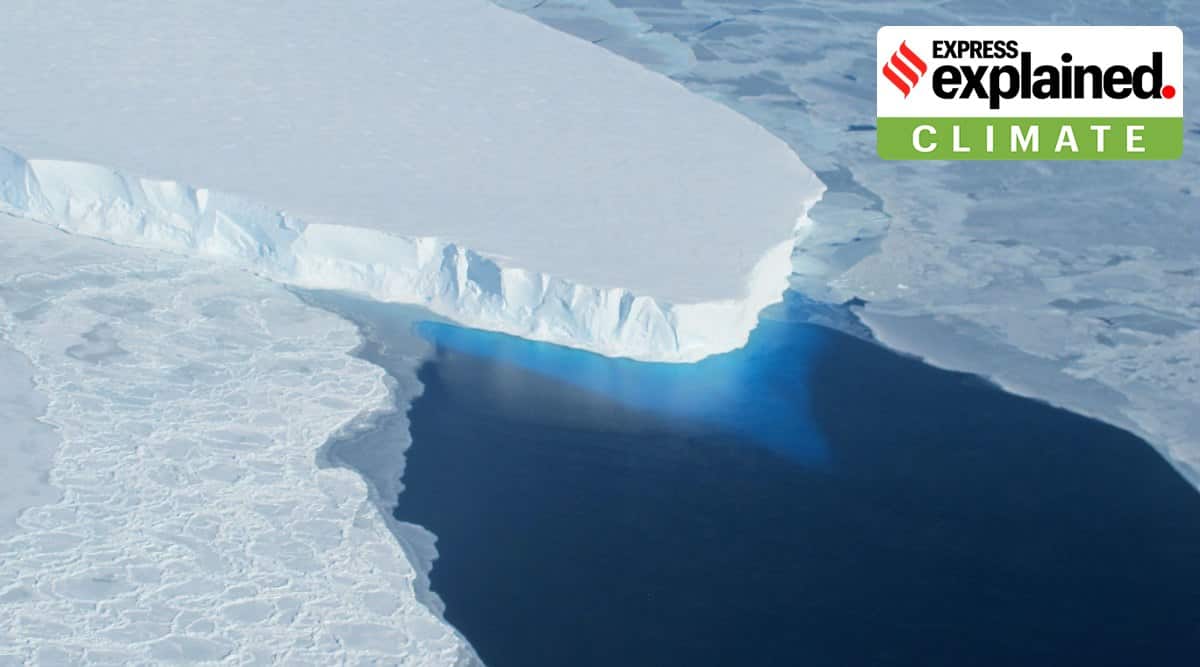 The melting of Antarctica’s Thwaites Glacier – also called the “Doomsday Glacier”– has long been a cause of concern because of its high potential of speeding up the global sea level rise happening due to climate change.

Researchers at Sweden’s University of Gothenburg are now saying that fears related to Thwaites’s melting are worse than previously thought, owing to the supply of warm water flowing underneath at a rate underestimated in the past.

What is the glacier and why is it important?

Called the Thwaites Glacier, it is 120 km wide at its broadest, fast-moving, and melting fast over the years. Because of its size (1.9 lakh square km), it contains enough water to raise the world sea level by more than half a metre. Studies have found the amount of ice flowing out of it has nearly doubled over the past 30 years.

Today, Thwaites’s melting already contributes 4% to global sea level rise each year. It is estimated that it would collapse into the sea in 200-900 years. Thwaites is important for Antarctica as it slows the ice behind it from freely flowing into the ocean. Because of the risk it faces — and poses — Thwaites is often called the Doomsday Glacier

What have previous studies said?

A 2019 study had discovered a fast-growing cavity in the glacier, sized roughly two-thirds the area of Manhattan. Then last year, researchers from New York University detected warm water at a vital point below the glacier. The NYU study reported water at just two degrees above freezing point at Thwaites’s “grounding zone” or “grounding line”.

The grounding line is the place below a glacier at which the ice transitions between resting fully on bedrock and floating on the ocean as an ice shelf. The location of the line is a pointer to the rate of retreat of a glacier.

When glaciers melt and lose weight, they float off the land where they used to be situated. When this happens, the grounding line retreats. That exposes more of a glacier’s underside to seawater, increasing the likelihood it will melt faster. This results in the glacier speeding up, stretching out, and thinning, causing the grounding line to retreat ever further.

In the NYU study, scientists dug a 600-m-deep and 35-cm-wide access hole, and deployed an ocean-sensing device called Icefin to measure the waters moving below the glacier’s surface.

What has the new study revealed?

Unlike the NYU study, where a hole had been dug, the Gothenburg study used an uncrewed submarine to go under the Thwaites glacier front to make observations.

“These were the first measurements ever performed beneath Thwaites glacier,” said Anna Wåhlin, professor of oceanography at the University of Gothenburg and lead author of the study that has been published in Science Advances.

The study was “more successful than we had dared to hope,” the press release said.

Crucially, the researchers have been able to identify three inflows of warm water, among whom the damaging effects of one had been underestimated in the past. “The researchers discovered that there is a deep connection to the east through which deep water flows from Pine Island Bay, a connection that was previously thought to be blocked by an underwater ridge,” the press release said.

The study also looked at heat transport in one of the three channels which brings warm water towards the glacier from the north. “The channels for warm water to access and attack Thwaites weren’t known to us before the research. Using sonars on the ship, nested with very high-resolution ocean mapping from Ran, we were able to find that there are distinct paths that water takes in and out of the ice shelf cavity, influenced by the geometry of the ocean floor,” the press release quoted Dr Alastair Graham of the University of Southern Florida as saying.

Why is this a cause of worry?

The study shows that warm water is approaching the pinning points of the glacier from all sides, impacting these locations where the ice is connected to the seabed and where the ice sheet finds stability. This has the potential to make things worse for Thwaites, whose ice shelf is already retreating.

Wåhlin also said, though, “The good news is that we are now, for the first time, collecting data that is necessary to model the dynamics of Thwaite’s glacier. This data will help us better calculate ice melting in the future. With the help of new technology, we can improve the models and reduce the great uncertainty that now prevails around global sea level variations.”