Nearly 30 million people in the United States — and probably many others whose illnesses were never diagnosed — have been infected with the coronavirus so far. Should these people still be vaccinated? Nearly 30 million people in the United States — and probably many others whose illnesses were never diagnosed — have been infected with the coronavirus so far. Should these people still be vaccinated?

Two new studies answer that question with an emphatic yes.

In fact, the research suggests that for these people, just one dose of the vaccine is enough to turbocharge their antibodies and destroy the coronavirus — and even some more infectious variants.

The results of these new studies are consistent with the findings of two others published over the past few weeks. Taken together, the research suggests that people who have had COVID-19 should be immunized — but a single dose of the vaccine may be enough.

“I think it’s a really strong rationale for why people who were previously infected with COVID should be getting the vaccine,” said Jennifer Gommerman, an immunologist at the University of Toronto who was not involved in the new research.

A person’s immune response to a natural infection is highly variable. Most people make copious amounts of antibodies that persist for many months. But some people who had mild symptoms or no symptoms of COVID-19 produce few antibodies, which quickly fall to undetectable levels.

The vaccines “even the playing field,” Gommerman said, so that anyone who has recovered from COVID-19 produces enough antibodies to protect against the virus. 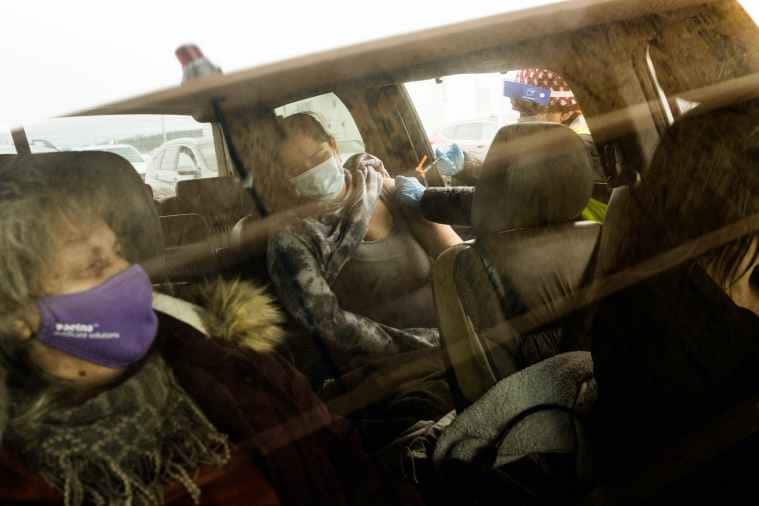 The latest study, which has not yet been published in a scientific journal, analyzed blood samples from people who have had COVID-19. The findings suggested that their immune systems would have trouble fending off B1351, the coronavirus variant first identified in South Africa.

But one shot of either the Pfizer-BioNTech or Moderna vaccine significantly changed the picture: It amplified the amount of antibodies in their blood by a thousandfold — “a massive, massive boost,” said Andrew T. McGuire, an immunologist at the Fred Hutchinson Cancer Research Center in Seattle, who led the study.

Flush with antibodies, samples from all of the participants could neutralize not only B1351 but also the coronavirus that caused the severe acute respiratory syndrome, or SARS, epidemic in 2003.

In fact, the antibodies seemed to perform better than those in people who had not had COVID and had received two doses of a vaccine. Multiple studies have suggested that the Pfizer-BioNTech and Moderna vaccines are about five times less effective against the variant.

The researchers obtained blood samples from 10 volunteers in the Seattle COVID Cohort Study who were vaccinated months after contracting the coronavirus. Seven of the participants received the Pfizer-BioNTech vaccine, and three received the Moderna vaccine.

Blood taken about two to three weeks after vaccination showed a significant jump in the amounts of antibodies compared with the samples collected before vaccination. The researchers do not yet know how long the increased amount of antibodies will persist, but “hopefully, they’ll last a long time,” McGuire said.

The researchers also saw increases in immune cells that remember and fight the virus, McGuire said. “It looks pretty clear that we’re boosting their preexisting immunity,” he said.

In another new study, researchers at New York University found that a second dose of the vaccine did not add much benefit at all for people who have had COVID-19 — a phenomenon that has also been observed with vaccines for other viruses.

In that study, most people had been infected with the coronavirus eight or nine months earlier but saw their antibodies increase by a hundredfold to a thousandfold when given the first dose of a vaccine. After the second dose, however, the antibody levels did not increase any further.

“It’s a real testament to the strength of the immunologic memory that they get a single dose and have a huge increase,” said Dr. Mark J. Mulligan, director of the NYU Langone Vaccine Center and the study’s lead author.

In some parts of the world, including the United States, a significant minority of the population has already been infected, Mulligan noted. “They definitely should be vaccinated,” he said.

It is unclear whether the thousandfold spike in antibody levels recorded in the lab will occur in real-life settings. Still, the research shows that a single shot is enough to increase the levels of antibodies significantly, said Florian Krammer, an immunologist at the Icahn School of Medicine at Mount Sinai in New York.

Krammer led another of the new studies, which showed that people who have had COVID-19 and received one dose of a vaccine experienced more severe side effects from the inoculation and had more antibodies compared with those who had not been infected before.

“If you put all four papers together, that’s providing pretty good information about people who already had an infection only needing one vaccination,” Krammer said.

He and other researchers are trying to persuade scientists at the Centers for Disease Control and Prevention to recommend only one dose for those who have recovered from COVID-19.

Ideally, those people should be monitored after the first shot in case their antibody levels plummet after some weeks or months, said Dennis R. Burton, an immunologist at the Scripps Research Institute in La Jolla, California.

The fact that the supercharged antibodies observed in the new study can fight the 2003 SARS virus suggests that a single dose of the vaccine may have prompted the volunteers’ bodies to produce “broadly neutralizing antibodies” — immune molecules capable of attacking a broad range of related viruses, Burton said.

He and other scientists have for decades investigated whether broadly neutralizing antibodies can tackle multiple versions of HIV at once. HIV mutates faster than any other virus and quickly evades most antibodies.

The new coronavirus mutates much more slowly, but there are now multiple variants of the virus that seem to have evolved to be more contagious or to thwart the immune system. The new study may provide clues on how to make a single vaccine that stimulates the production of broadly neutralizing antibodies that can destroy all variants of the coronavirus, Burton said.

Without such a vaccine, scientists will need to tweak the vaccines every time the virus changes significantly. “You’re stuck in a kind of Whac-a-Mole approach,” he said. It will probably take many months if not longer to develop and test that sort of vaccine against the coronavirus, but “that’s the