The Suez Canal has been blocked after a large cargo ship ran aground and got stuck sideways across the canal, blocking the path of other ships waiting to cross through on both sides. The Suez Canal, a critical shipping artery that connects the Mediterranean and Red Seas through Egypt, has been blocked after a large cargo ship ran aground while passing through it on Tuesday, bringing traffic on the busy trade route to a halt.

Egypt, which heavily depends on revenues from the canal, is now diverting ships to an older channel to minimise disruption to global trade. The blockage has already led to a long queue of vessels waiting to cross the canal.

A human-made waterway, the Suez Canal is one of the world’s most heavily used shipping lanes, carrying over 12% of world trade by volume. Built in 1869, it provides a major shortcut for ships moving between Europe and Asia, who before its construction had to sail around Africa to complete the same journey.

So, why is the Suez Canal blocked?

The vessel blocking Suez is the Ever Given – a Panama-registered container ship that is on its way to Rotterdam in the Netherlands from China. The 2018-built vessel, which is 400-m long and 59-m wide, got stuck here due to a mishap caused by bad weather.

On Tuesday morning local time, while passing northwards through the Suez Canal in order to enter the Mediterranean Sea, the ship weighing 2 lakh tonnes ran aground and got stuck sideways across the canal, blocking the path of other ships waiting to cross through on both sides.

Evergreen Marine, a Taiwanese transport company that operates the ship, said it was “suspected of being hit by a sudden strong wind, causing the hull to deviate… and accidentally hit the bottom and run aground”. None of the crew members was injured, the company said.

What is being done to free the waterway?

A maritime historian who spoke to the BBC said that incidents such as this are rare, but can have massive ramifications for global trade when they happen. As per the report, the Ever Given is the largest vessel to go aground in the Suez Canal.

The Suez Canal Authority (SCA) is now trying to refloat the Ever Given using rescue and tug units, the report said. Diggers are also trying to free the ship from the canal’s bank, where it is lodged. 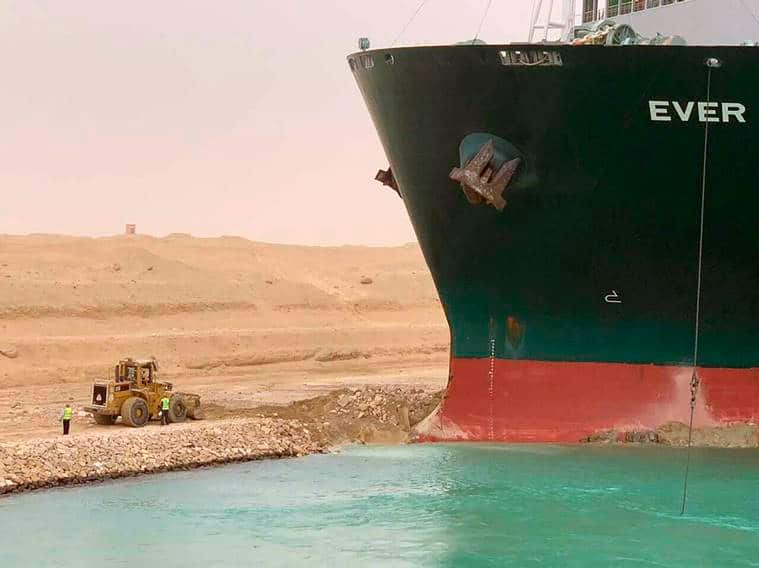 Experts have said that the effort to remove the ship and make the canal fully functional again could take several days. Since the alternative route between Europe and Asia around Africa is a week slower than the Suez route, a daylong blockage could have a severe impact on global trade.

According to a Reuters report, any such delay could also lead to a shortage of container vessels and boxes, as 30% of all container ships in the world pass through Suez. As per SCA data, in 2020, nearly 19,000 ships, or an average of 51.5 ships per day, with a net tonnage of 1.17 billion tonnes passed through the canal.

The canal’s importance for Egypt

The 150-year-old canal was controlled by British and French interests in its initial years, but was nationalised in 1956 by Egypt’s then leader Gamal Abdel Nasser. Over the years, the canal has been widened and deepened.

In 2015, Egypt announced plans to further expand the Suez Canal, aiming to reduce waiting times and double the number of ships that can use the canal daily by 2023.

As per an AFP report, the canal is a major source of income for Egypt’s economy, with the African country earning $5.61 billion in revenues from it last year.