The BJP, which has been in power in Madhya Pradesh since 2003, excluding the 15-month-long rule of the Congress in 2018, has initiated a massive tribal outreach programme after losing tribal seats in a closely contested assembly elections. 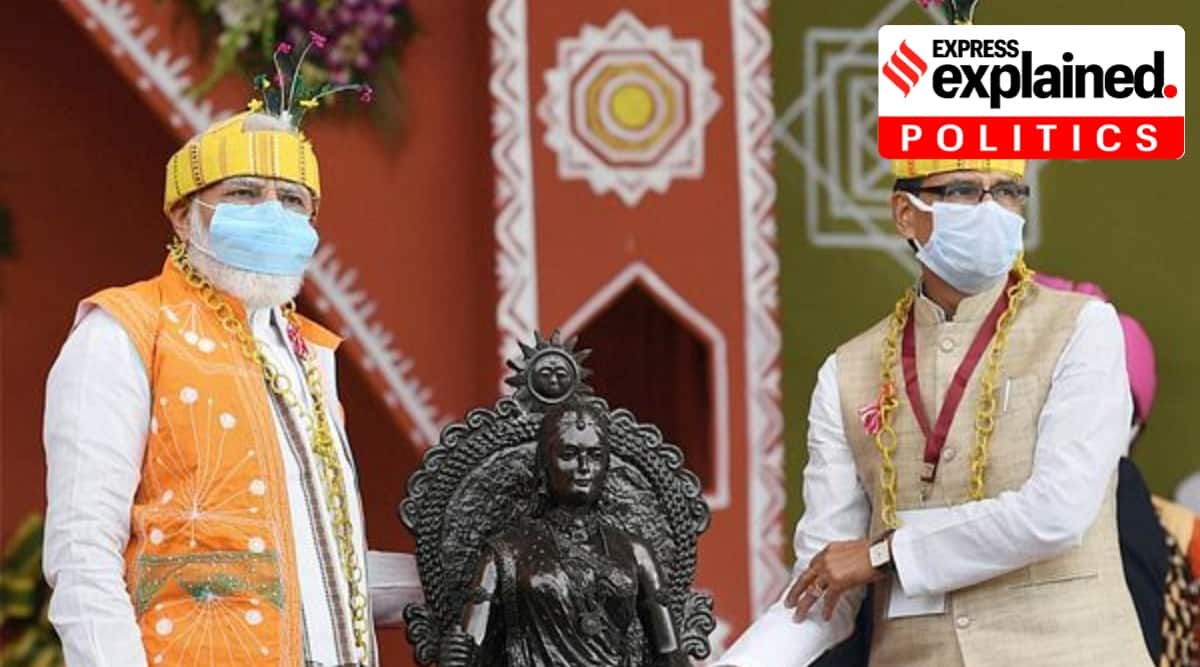 From renaming two railway stations and a university after tribal icons, to setting up memorials and museums highlighting the participation of tribal leaders in freedom struggle, the ruling Bharatiya Janata Party (BJP) in Madhya Pradesh is leaving no stone unturned to woo the 1.53 crore tribal population of the state that account for 21.10 per cent of its 7.2 crore population.

The BJP, which has been in power in Madhya Pradesh since 2003, excluding the 15-month-long rule of the Congress in 2018, has initiated a massive tribal outreach programme after losing tribal seats in a closely contested assembly elections. In the 2018 elections, of the 47 reserved ST seats, the BJP managed to win 16 seats as opposed to 31 ST seats it had won in 2013. Out of 230 assembly seats in MP, 47 are reserved for Scheduled Tribes and 35 for Scheduled Castes.

Madhya Pradesh has the largest tribal population of the country, with 46 recognised scheduled tribes, of which three are Particularly Vulnerable Tribal Groups (PVTG) spread across the 52 districts in the state.

A look at the state government’s recent announcements for tribal outreach.

On September 18, the state government announced the implementation of the Panchayats (Extension to Scheduled Areas) Act, 1996, which allows self-governance through traditional gram sabhas for people living in scheduled areas. This was followed by legalising mohua, a staple drink of the tribals, which will be sold as ‘heritage liquor’. The chief minister has also announced that petty cases registered against tribals will also be withdrawn, most of which are for production and sale of mahua-based liquor.

Whereas with a view to provide food security, home delivery of foodgrains distributed under public distribution across all 89 tribal blocks has also been announced.

University in Chhindwara to be named after Shankar Shah, Raghunath Shah

Shankar Shah (70), son of Sumer Shah, was the last ruler of Garha Kingdom under Gond rule. With a population of 50.93 lakh, Gonds are the second largest tribe in Madhya Pradesh accounting for 33.84 percent of the total tribal population in the state. Chhindwara University was announced to be named after the father-son duo following a visit by union Home Minister Amit Shah in the state on the occasion of their death anniversary on September 18, 2021. Amit Shah had also announced the construction of a museum at the cost of Rs five crore at the palace where Shankar Shah and Raghunath Shah were held captive. The MP government will also be erecting the statue of the father-son duo at the cost of Rs 50 lakh.

Notably, Chhindwara district has three tribal and one Schedule Caste seat, all of which are held by the Congress

When the revolt of 1857 broke out, Shankar Shah along with his 40-year-old son Raghunath Shah, gave an outcry for war. They were joined by soldiers of the 52nd battalion along with Thakurs to overthrow British rule. However, before their plan could materialise, the British got wind of the revolt and imprisoned Shankar Shah and his son along with 14 others. They were awarded the death penalty for conspiring against British rule after which they were tied to a cannon and blasted to death in full public view on September 18,1858 in the current Jabalpur city.

Railway station, bus stop to be renamed after Tantya Bhil, a memorial in his name in Khandwa

Tantya Bhill was born in Birda village of west Nimar in Madhya Pradesh in the 18th century and was only 25-year-old when the 1857 mutiny broke out. Tantya Bhil, as the name suggests, belongs to the Bhil community that accounts for nearly 40 percent (59.93 lakh) of the total 1.53 crore tribal population in MP. The Bhils are spread across western MP in districts of Barwani, Khandwa, Burhanpur, Khargone, Dewas, Dhar, Jhabua and Alirajpur.

Chief Minister Shivraj Singh Chouhan has announced renaming of Patalpani railway station in Indore after Tantya Bhil . Indore’s Bhanwar Kuan intersection and MR 10 bus stand, being developed at the cost of Rs 53 crore, will also be named after Tantya Bhil. A primary health centre, Manpur in Indore will be named as Tantya Bhil Health Centre while Tantya Bhil Temple in Palanpur will be renovated. 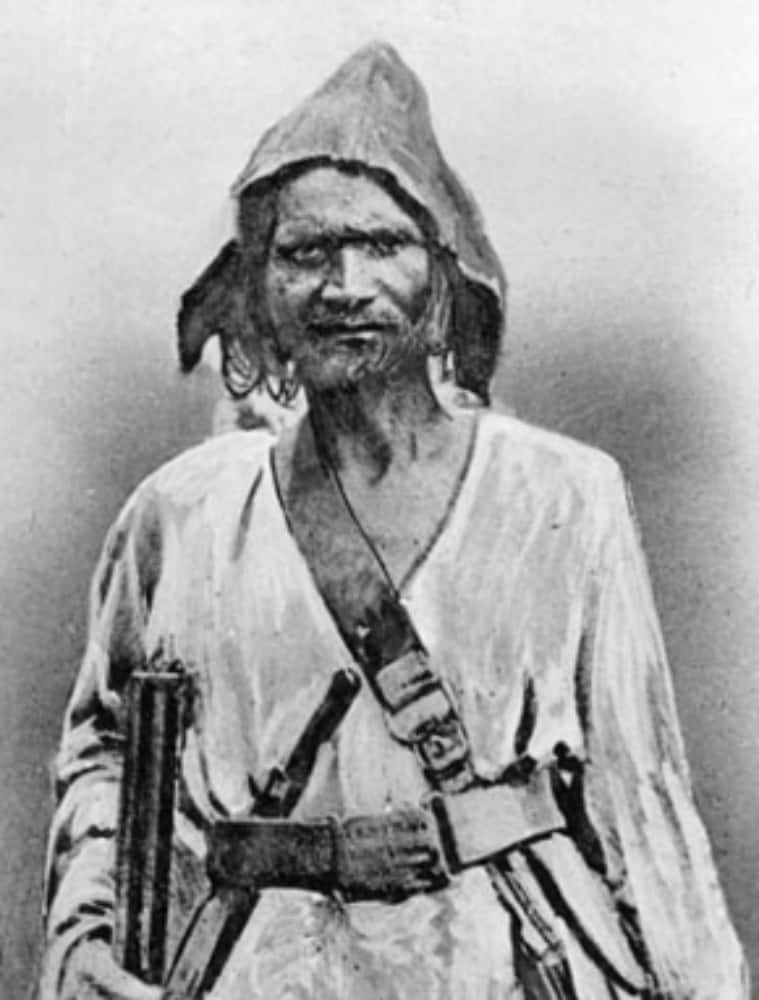 These eight districts combined account for 18 tribal seats of which 13 seats are held by the Congress.

Tantya Bhill’s parental property was seized by the British and he was put in jail. He was tainted as a thief even by those from his village after which he resettled in a village in the present-day Indore and formed a small group of revolutionaries. He was, however, arrested during a police raid conducted in Pokhar village. Tantya Bhil soon escaped the Britishers and gave clear instructions to his men not to commit atrocities on women or the poor but help them instead, which earned him the title of ‘Tantya Mama’. He was much revered in the Holkar kingdom.

With Tantya Bhil becoming a growing menace for the British, they made a special police battalion called ‘Tantya police’ to arrest him. When the Britishers failed to arrest him, they resorted to diplomacy with Tantya Bhil’s brother-in-law Ganpati becoming the mediator for direct talks with the Britishers. At 50 years of age, Tantya was aware of his declining physical power and agreed to live peacefully. But while the police were to meet Tantya unarmed, they arrested him instead. Despite attempts by the Bhils and Holkar King, he was not given a pardon and awarded a death penalty on October 13, 1889. This made him a revered hero for the Bhils.

Bhima Nayak, like Tantya Bhil, belonged to the Bhil community and headed the struggle of the Bhils against the Britishers in Khandesh from 1818 to 1850. The CM has announced setting up a memorial of Bhima Nayak in Barwani.

Khandesh was a region in the northwest region of present-day Maharashtra comprising Jalgaon, Nandurbar and bordering Barwani district of MP. Bhils were prominently found in Malwa and Nimar regions through which a military route passed. Owing to its political and economic importance, everyone from Mughals, Rajputs, Marathas and subsequently the Britishers struggled for control over it. In 1818, after the fall of Scindia and Holkar rule by the Britishers, the area also fell under control and marked the beginning of a constant fight put up by Bhils for their freedom. Bhima Nayak was friends with Khajya Nayak along with whom he fought against the Britishers and did not accept clemency. When the revolt of 1857 was quelled in the northern states, Bhima Nayak continued to lead the fight in Nivaad, Nasik and Khandesh till 1867. He was arrested in 1867 and exiled from India.

A medical college in Mandla will be named after Raja Hirde Shah Lodhi, who had come from Kashi and settled in MP’s Bundelkhand region. His ancestors had established their kingdom in the present-day Damoh which was then under Gond rulers. The then Gond ruler of Garah-Mandla appointed them as a governor on the condition that they could serve the then king Nizam Shah and give half of their revenue to him.

Raja Hridey Shah Lodhi ruled the northern region of the present-day Narsinghpur and played a crucial role during the revolt against the Britishers in 1842.

Mandla, a fully tribal district, has three reserved tribal seats all of which two are held by Congress and one by BJP.

Rani Kamlapati was the seventh wife of Gond ruler Nizam Shah who ruled from the Ginnor fort, which is present-day Sehore district. Nizam Shah ruled over 750 villages and constructed a palace in Bhopal for Kamlapati, which came to be known as Kamlapati Mahal. But after Nizam Shah was poisoned by his brother Chain Singh, Kamlapati is believed to have gone into hiding with her 12-year-old son and sought help from Afghan ruler Dost Mohammad Khan, a mercenary.

The 48th Gond ruler of Garha kingdom, Sangram Shah ruled over 52 bastions of the Gond tribes. His eldest son Dalpat Shah was married to Rani Durgavati who is said to have died while fighting the Mughals.

Sangram Shah was a great patron of art. He wrote Rasratnamala and also had a vast knowledge of Sanskrit. Recently, CM Chouhan announced an award of Rs five lakh for best work in tribal art and culture in Sangram Shah’s honour.