Cuban protesters have been chanting 'freedom; and calling for President Miguel Diaz-Canel to step down. 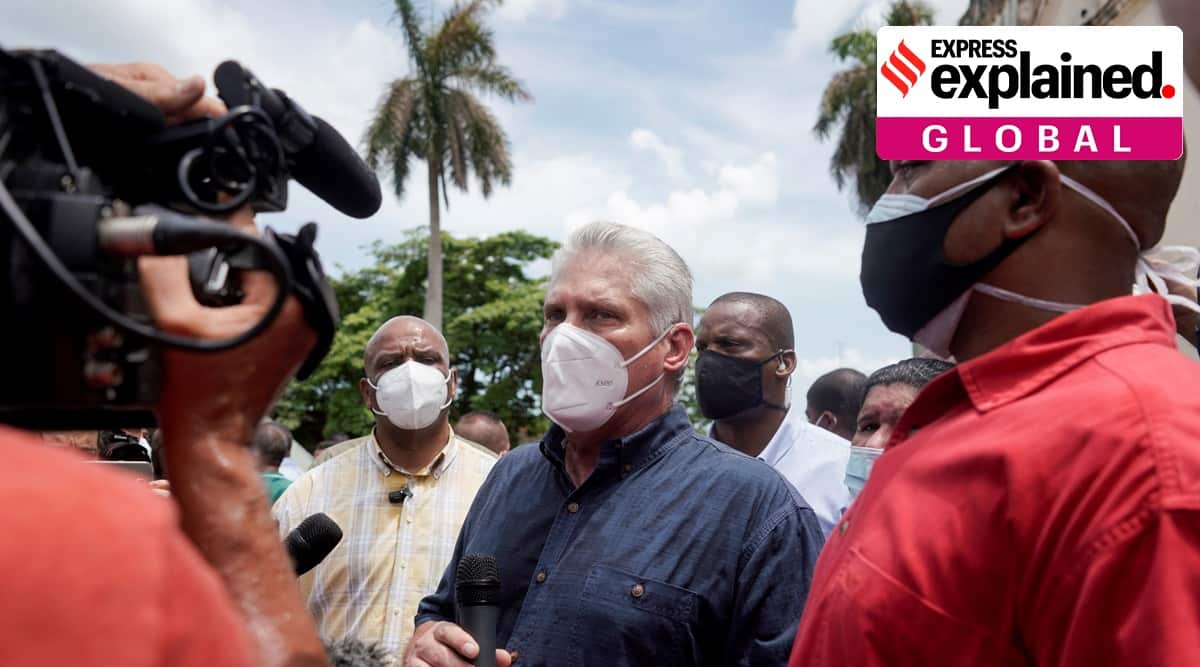 Thousands of people in the small island nation of Cuba are protesting against the country’s communist government, in what are believed to be the biggest demonstrations seen in over three decades.

The demonstrations have been fuelled by a collapsing economy and the government’s handling of the Covid-19 pandemic.

In fact, the protests were seen just a few days after the Cuban government announced that its homegrown vaccine called Soberana (Sovereign) was about 91 per cent effective against symptomatic patients, as demonstrated in late stage clinical trials.

Cuba has not imported Covid vaccines, but its authorities have been administering experimental vaccines en masse as part of “intervention studies”, according to a Reuters report. About 1.5 million of the country’s 11.2 million residents have been fully vaccinated so far, said the report.

Other than Soberana, Cuba has four more vaccine candidates being developed. If approved, it might become the first Latin American country to produce and develop its own vaccines against the disease. However, concern over Covid has mounted as the arrival of the Delta variant has led to a spike in cases. Cuba reported 6,923 Covid-19 cases and 47 deaths on Sunday, double of what was recorded the previous week.

The pandemic has been accompanied by widespread economic distress. Much like Malaysia recently, Cubans since last year have been putting up white flags or the #benderaputi (white flag) outside their homes to convey financial distress and the need for assistance.

What are these protests about?

Cuba has been an authoritarian communist state for more than six decades. It has a population of about 11 million people who primarily speak Spanish, and a GDP of $100 billion. Its per capita GDP is roughly $8,000 and it has a majority population of Christians, as per information compiled by the non-profit Council on Foreign Relations (CFR).

Apart from the pandemic, the country has suffered due to economic sanctions imposed by the administration of former US president Donald Trump. In 2020, the country’s economy shrunk by 11 per cent — leading to shortages of some basic goods including rice — which was its worst performance in about three decades.

As per a Reuters report, the anti-government protests have emerged in the middle of the country’s worst economic crisis since the fall of the Soviet Union, which was its old ally.

Protestors have been chanting “freedom” and calling for President Miguel Diaz-Canel to step down. “Thousands of Cubans joined street protests from Havana to Santiago on Sunday in the biggest anti-government demonstrations on the Communist-run island in decades,” the report said.

Broadly, Cubans are protesting against food shortages, rising cases of Covid-19 and severe electricity blackouts in the country, which they attribute to the government’s failure to cope with the situation. Due to the pandemic, tourism, which was one of the major sources of income for tradesmen and taxi drivers–one of the only sectors where private activity had been traditionally allowed – has also suffered.

What is the government doing?

Diaz-Canel has blamed the protest on the United States, saying “sincere protesters” have been “manipulated” by US-orchestrated social media campaigns and “mercenaries” on the ground.

The President has warned of action, and called upon its supporters to “confront provocations.”

The government has also taken some steps to mitigate the economic distress, whose effects are yet to to be felt on the ground.

Earlier in February, Cuba announced it will allow private businesses to operate in most sectors of the national economy. Labour Minister Elena Feito said at the time that under the new reforms, the number of authorised industries has grown from 127 to over 2,000, with only a minority of industries continuing to be dominated by the state.

Once the long-overdue reforms, which were first announced in August 2020, are implemented, small businesses are expected to expand, allowing private players to move beyond tourism and small farms.