Farmers had blocked around 15 roads including national highways in Jind district after the Rohtak incident on Saturday late evening. 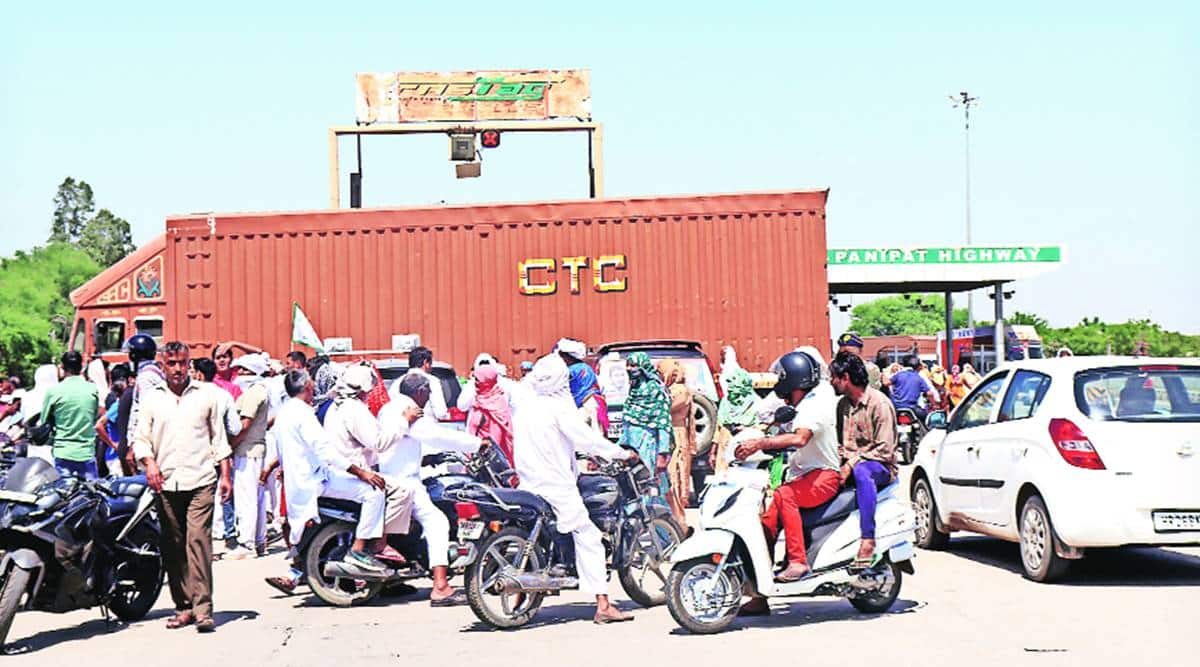 PROTESTING FARMERS blocked several roads including national highways in Haryana’s Jind, Rohtak and Hisar districts for some hours on Saturday night and Sunday to express resentment against “lathicharge” on farmers in Rohtak even as authorities insisted that police lathicharge did not take place there.

Haryana Chief Minister Manohar Lal Khattar had faced a massive protest by farmers in Rohtak on Saturday which led to a clash between police and protesters and even forced district authorities to shift the helipad for the CM’s chopper from a private university campus to Rohtak policelines. A few policemen and at least two farmers were injured in the clash.

The clash had forced authorities to shift the helipad for CM’s chopper from a private university campus to Rohtak Police Lines. The protest against the CM had come close on the heels of Haryana Deputy Chief Minister Dushyant Chautala too facing a major farmers’ protest in Hisar.

Sources say farmers had blocked around 15 roads including national highways in Jind district after the Rohtak incident on Saturday late evening. The roads were blocked in some other parts of the state including Hisar district too.

A farmer leader from Jind, Ramphal Kandela, said that two national highways – Jind-Kaithal-Chandigarh and Jind-Delhi – which were blocked in Jind district Saturday evening, were opened around 3 pm on Sunday. A farmer leader from Rohtak, Sumit Kumar, said farmers blocked Rohtak-Panipat national highway at Makdoli toll plaza for three hours – 12 noon to 3 pm – on Sunday. According to Kumar, a link road in the district too was blocked for almost two hours Sunday.

Local farmer leader from Charkhi Dadri Raju Mann said the agitators blocked Bhiwani-Mahendragarh national highway at Kitlana toll plaza in Bhiwani district for half an hour. “The farmers burnt effigy of the chief minister too. Our struggle will continue till three farm laws are not repealed,” added Mann.

Meanwhile, BKU Haryana unit president Gurnam Singh Chaduni urged the farmers to unblock all roads at 3 pm Sunday. He also addressed a panchayat of farmers at Makdoli toll plaza of Rohtak district. Chaduni alleged that many farmers who were protesting peacefully were lathicharged and received injuries, but despite that the police claimed they did not use force on them. The farmer leader sought action against those who inflicted injuries on farmers. “If the government did not order a lathicharge on farmers, who did inflict injuries on farmers?” he asked.

“If the leaders of the alliance continue to remain adamant to come to public, the Samyunkta Kisan Morcha will take a call in this regard on April 6,” he added.

Earlier, on Sunday morning, DSP Jind Pushpa Khatri said that a jam-like situation had developed in Jind district at many locations following speculation after the Rohtak incident. Urging farmers not to get influenced by the speculation, the DSP said that the situation is peaceful in Rohtak. “No lathicharge was undertaken by the police (in Rohtak). During the protest (in Rohtak), some people had pelted stones on police, which had resulted in injuries to some policemen and 2-3 farmers,” she added.