The spiralling violence across Israel, the West Bank and Gaza shows the geopolitical faultlines of Arab-Israel history remain entrenched in everyday life 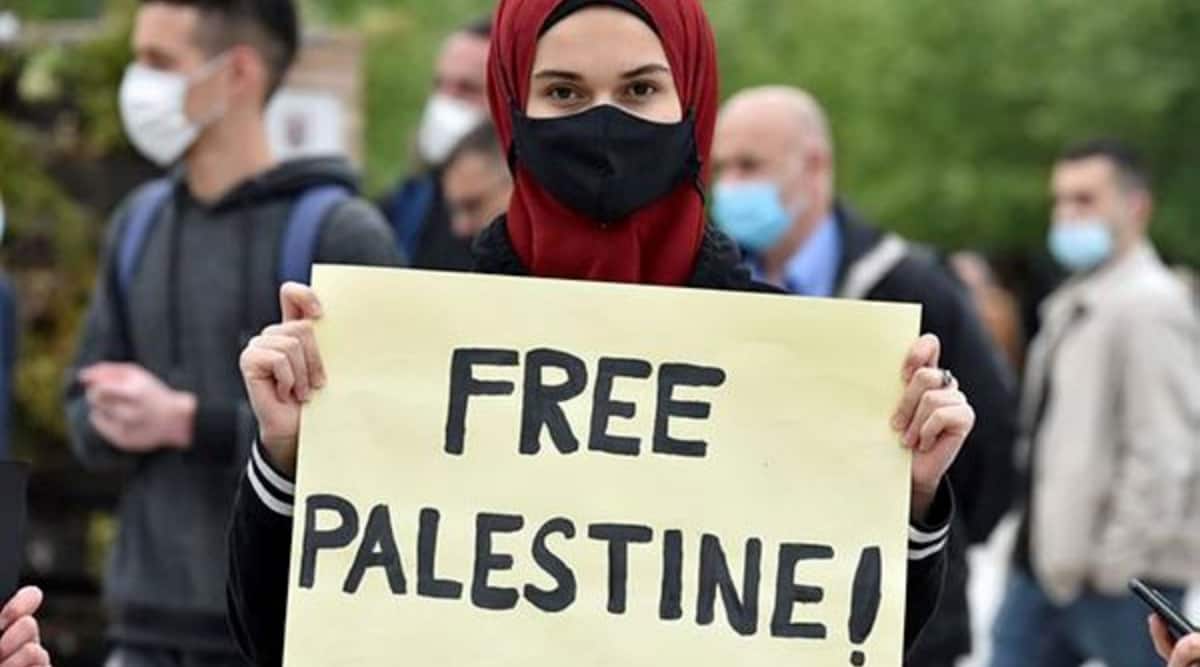 “I am here. Anything more than that is rumour and slander.” One couldn’t but reminisce the lines of A River Dies of Thirst by the Palestinian national poet Mahmoud Darwish—while sitting before a middle-aged Anis Salah at a wayside restaurant on the outskirts of the Cairo city in early September 2019. Salah, a Palestine refugee from Gaza, kept looking at me in fear and suspicion for some time. When I introduced myself as an Indian, Salah heaved a sigh of relief. However, our conversation lasted only for a few minutes as my colleagues in the Indian delegation were busy moving to the next destination for a scheduled meeting.

Salah having entered the city illegally a decade ago was working in a garment factory run by a local resident who took part in the uprising against the Mubarak regime. Since the “failed revolution” Salah and his master were under constant threat by the El-Sisi regime in Egypt which unleashed a hunting of the Morsi’s supporters. Salah was sure that “death was so imminent” for him and that he had only to choose the option—who should do it and where should it happen, in Cairo or Gaza.

Though A River Dies of Thirst resonances the sufferings and agonies in Gaza, West Bank and Lebanon, it also echoes the fear of death anywhere for any Palestinian in this world. Salah appeared to me an epitome of “death as political” as enunciated by the Cameroonian social theorist, Achille Mbembe. Mbembe’s “necropolitics” had already encapsulated how the Palestinians encounter their daily life with “death as a political option”.

With panic mounting of a full-scale war between Israel and the Palestinians, the world is again to grapple with another major crisis amid the surge in Covid-19 in many countries, including in the Occupied Territories. The spiralling violence across Israel, the West Bank and Gaza, in which as many 119 people have already been killed, including 31 children and hundreds injured, has unfolded to show the geopolitical faultlines of Arab-Israel history still get entrenched in everyday life. Reports say that the Hamas, which has been ruling Gaza for a long time, started retaliation with the rockets being sent crashed into buildings near Tel Aviv causing damage and human casualties. Several people were killed in Israel since hostilities began. There are also indications that the Israeli military is getting its combat troops ready for ground operations as it did in 2014 and 2008-2009. Meanwhile, Israeli air raids and bombardment continued across the Gaza Strip, leaving many Palestinians no option but to take refuge in UN-run schools.

Even as the Palestinians were set to observe “Nakba” day (memory of the “catastrophe”), May 15, they were literary under threat of another Nakba, with Israel’s frenzied blitzkrieg in Gaza and West Bank. If the mass expulsion in 1948-49 resulted in the displacement of more than 7,50,000 Palestinians from 532 villages—to make way for the new state of Israel—the future of more than 5 million Palestinians today is at risk from terror and necropower.

The West Bank and Gaza, along with the Israeli-annexed East Jerusalem, were long seen as the basis of a Palestinian state in a “two-state” solution. However, after decades, the goal of a permanent settlement has become ever more distant with the West Bank and Gaza witnessing forays of Jewish settlements, and several states, including the US, recognising Jerusalem as Israel’s “exclusive” capital. While Donald Trump set the stage for a fresh round of fights over Jerusalem, the internal politics of both Israel and the Palestine Authority have their role in exacerbating the conflict.

Israel has been facing political instability in the recent past with four parliamentary elections (in two years), and no stable government . This is at a time when the right-wing Prime Minister Benjamin Netanyahu has been on trial for a host of charges like bribery, breach of trust and fraud. Even the results of the latest election held in March this year were inconclusive and the political deadlock might lead to another election.

On the other side, Palestinian President Mahmoud Abbas decided to put off the scheduled parliamentary and presidential elections—to be held in May and July this year. The postponement was “necessitated” by issues related to voting in East Jerusalem, already under the Israeli occupation, but there were also reports of rifts in Abba’s Fatah party which led to the decision. He declared that the elections would be deferred “until the participation of our people in Jerusalem is guaranteed.” However, many Palestinians refused to buy this argument. They believe that Abbas was using Jerusalem as a pretext to circumvent elections because Fatah would lose its hold given its unpopularity and that would help Hamas.

Plausibly, Hamas had realised that its political future could be easily entwined with the Jerusalem question, especially in the holy month of Ramadan, and hence it began activities to confront, if not provoke, the Israeli forces who were guarding the Damascus Gate—a major entry point to Jerusalem’s Old City.

Meanwhile issues emerging from the eviction of Palestinians—from settlement in the Sheikh Jarrah neighbourhood—stirred up widespread protests and demonstrations. Hamas knew that the Fatah-led Palestinian Authority wouldn’t do anything to address these issues. This became clear after the storming of the al-Aqsa mosque (the third holiest shrine in Islam) by Israeli forces on May 10.

According to the Israeli appellants, the Jewish families who lost their lands in the wake of Israel’s creation in 1948 can recover them as per the Israeli law. But it does not afford the same entitlement to the hundreds of thousands of Palestinians who were displaced after 1948. Moreover, East Jerusalem was captured by Israel from Jordan in 1967. The Palestinians say that if Jews can claim back their lands in East Jerusalem based on their pre-1948 documents, the same law must be made applicable to them in West Jerusalem. It may be recalled, in October 2020 an Israeli court ruled that four Palestinian families should vacate their homes, and gave May 2 as the date for their forcible eviction. But the date has been postponed twice with the escalation of conflict and inter-communal tensions.

It was in this background that the UN spokesman, Rupert Colville, called on Israel “to immediately call off all forced evictions.” He reminded that “East Jerusalem remains part of the occupied Palestinian territory, in which international humanitarian law applies” and that “the occupying power… cannot confiscate private property in occupied territory.”

Though the current conflict began as protests against forced expulsions, it has become a major showdown. If the situation continues to deteriorate, the experience of Sheikh Jarrah is likely to be repeated in other occupied territories. Already, Palestinians are caught between the agonies of the pandemic and the panic of displacement.

This was brought to light by The Lancet in an analysis of the situation in the occupied territories carried out by the Lancet Palestinian Health Alliance. It noted that Gaza was “under intensified blockade by Israel” for quite a long time, “resulting in shortages in medical supplies and clinical capacity. Israel has denied its status and role as an occupier of the West Bank and the attendant responsibilities for the health of the occupied population, as laid down in the Geneva Convention and highlighted by the UN and 18 human rights organisations.”

The Lancet wrote that “Israel is complicit in the increased vulnerability of the Palestinian population to Covid-19. Israel has not only a legal but a moral responsibility to secure the urgent availability of approved vaccines.” It also called on physicians and other health professionals “to raise their voices and put pressure on the Israeli Government to provide vaccines to Palestinians, including Palestine refugees on the West Bank and Gaza Strip.”

The UN human rights agency had already reminded Israel that it’s their “responsibility to provide equitable access to Covid-19 vaccines for Palestinians in Gaza and the West Bank.” But Israel turned down such a position. The Israeli health minister went to the extent of saying that as per the Oslo agreements the Palestinians “have to take care of their own health.” The delay in the health care provisions in the occupied territories resulted in a sharp rise in both coronavirus infections and deaths.

Mbembe wrote that the “ultimate expression of sovereignty resides in the power and capacity to dictate who may live and who must die.” Illustrating the Palestinian case, he said that “late-modern colonial occupation is a concatenation of multiple powers: disciplinary, biopolitical, and necropolitical. The combination of the three allocates to the colonial power an absolute domination over the inhabitants of the occupied territory. The state of siege is itself a military institution. It allows a modality of killing that does not distinguish between the external and the internal enemy. Entire populations are the target of the sovereign.”

If Anis Salah thought that “death was so imminent” for him—from multiple sources—that inscribes the life-world experience of every Palestinian living in the occupied territories, as well as in the diaspora. And the “state of exception” is a legitimising tool for necropolitics of the occupier.