‘I am very grateful to Rajnathji that he confirmed the fact that Savarkar was a habitual mercy-seeker from the British.’ 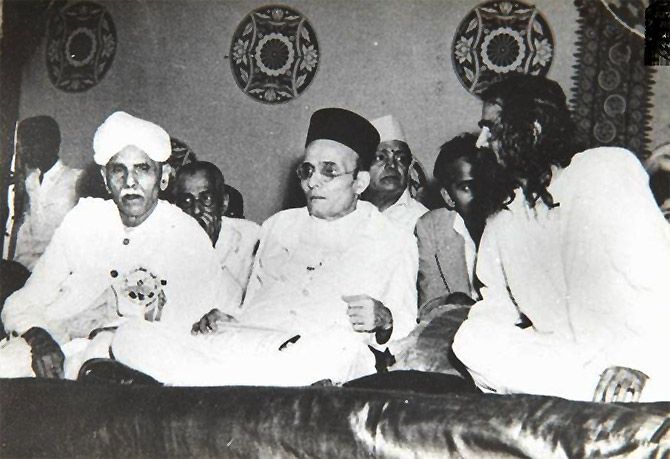 Defence Minister Rajnath Singh set off a storm in political circles on Tuesday when he said Vinayak Damodar Savarkar wrote a mercy petition to the British government on Mohandas Karamchand Gandhi’s advice.

Singh made this statement at the launch of the book Veer Savarkar — The Man Who Could Have Prevented Partition by journalist Uday Mahurkar.

‘ eer Savarkar was an icon of Indian history and will remain so. He was a freedom-fighter and a staunch nationalist but people who follow the Marxist and Leninist ideology are the ones who accuse Savarkar of being fascist,’ Rajnath Singh said on Tuesday.

Syed Firdaus Ashraf/Rediff.com spoke to Tushar Gandhi, Mahatma Gandhi’s great-grandson, to find out if Rajnath Singh’s statement is borne out by facts. The first of a two-part interview:

I am very grateful to Rajnathji that he confirmed the fact that Savarkar was a habitual mercy-seeker from the British.

It is now officially confirmed because a senior minister of the Union government has given this assurance. We have finally got validation of what we have been saying for such a long time.

Do you mean that before Rajnath Singh no Bharatiya Janata Party leader had stated that Savarkar sought mercy from the British?

No, not to my knowledge. And not in a public manner as how Rajnath Singh has now acknowledged and accepted.

One wonders about Rajnath Singh’s statement because Savarkar wrote his first mercy petition in 1911 when Gandhi was in South Africa. He returned to India only in January 1915.

For this also, I am grateful to Rajnath Singh because he has acknowledged that barrister M K Gandhi in South Africa had such a huge influence on world affairs in 1911.

Barrister M K Gandhi has written that while he was in South Africa, he had no time for anything else but satyagraha in South Africa, but here Rajnath Singh is saying that he did influence Savarkar for his first mercy petition in 1911.

It also confirms that before the rise of barrister M K Gandhi in Indian politics he was very influential and for that again I am thankful to Rajnath Singh.

Historically, is what Rajnath Singh said a fact or not?

These days history does not matter, does it?

And especially for historians like Rajnath Singh, it hardly ever mattered.

Is there any proof that Gandhi wrote to Savarkar telling him that he should ask for mercy?

Later on in his life, he did say that it was wrong to keep Savarkar in prison. He also recommended that Savarkar should be free, but he was not an advisor to Savarkar and definitely not in 1911 when Savarkar wrote his first mercy petition.

Tomorrow, someone will also say that Savarkar took pension and subsequently asked for an increment too from the British after his release from Andaman jail on Mahatma Gandhi’s advice.

So many decades have passed since their deaths, but the ideologies of both Savarkar and Gandhi are still going strong. What is the reason?

For the simple reason their ideologies are so opposing to each other that there is no common ground for anyone.

Even today, when Savarkarites speak, they cannot speak without speaking in a language of threat. Rajnath Singh too proved that by saying, ‘We will not tolerate any more misinformation or slander against Savarkar.’

What does he mean? Who are ‘we’? Is that the official policy of the government?

What will they do if someone slanders Savarkar? Is there a law against it?

I want to know, what will they do? This is the kind of language they use.

And if one uses this kind of language, one cannot find common ground with people of such a mentality.

Savarkar’s portrait hangs in Parliament along with Gandhi’s portrait. Why do we still debate the past?

They are welcome to do that. If they want, they can even install a portrait of Nathuram Godse (who murdered Gandhi on January 30, 1948) in Parliament and I will have nothing to say against it.

Expecting someone like them to venerate someone like Gandhi is a bit too much for me to ask. Their ideology can only lead them to worship a murderer. And I believe they have the right to do that.