A Konkani and Hindi version of the film, titled Chhatrapati Shivaji Maharaj Shivrajyabhishek Divas, was released on social media by Chief Minister Pramod Sawant and covers the history of Goa and Shivaji’s role in fighting the Portuguese. 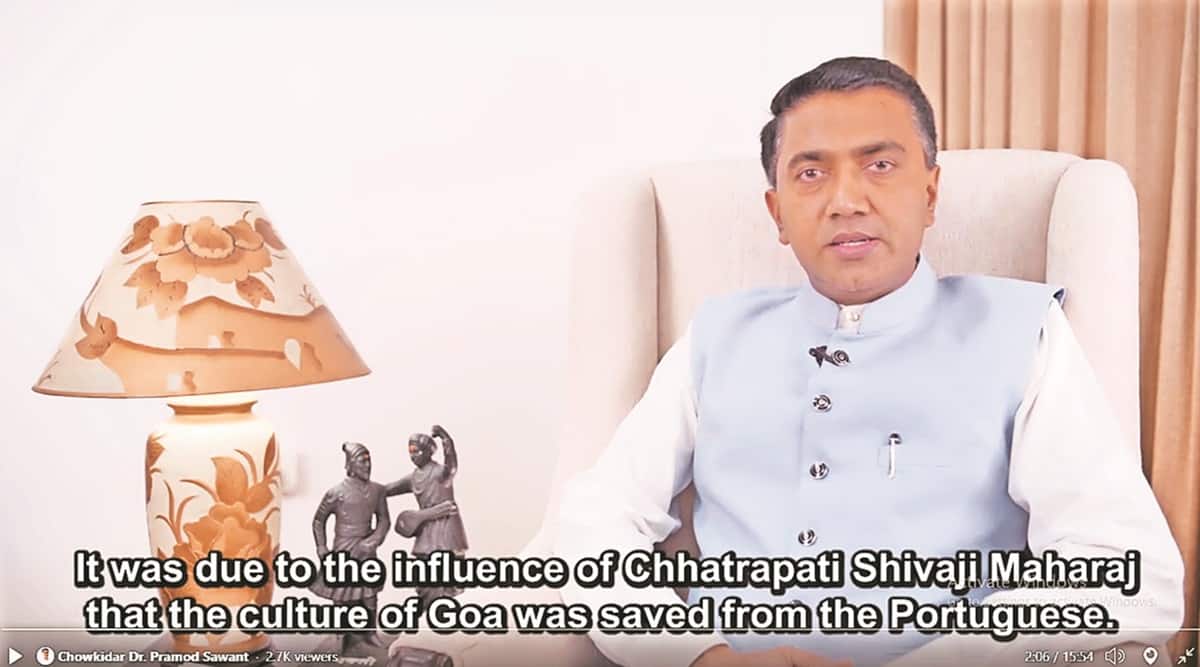 The Goa government on Sunday released a short film on Chhatrapati Shivaji on the occasion of the anniversary of Maratha king’s coronation day.

A Konkani and Hindi version of the film, titled Chhatrapati Shivaji Maharaj Shivrajyabhishek Divas, was released on social media by Chief Minister Pramod Sawant and covers the history of Goa and Shivaji’s role in fighting the Portuguese. It also speaks of “hundreds of such true stories” that it wanted the future generations to be aware of.

“It was due to the influence of Chhatrapati Shivaji Maharaj that the culture of Goa was saved from the Portuguese,” Sawant says in the film, which was made by the state department of information and publicity.

The film speaks of a royal tax imposed by the “traitorous” landlords in Pernem, Bicholim, Maneri and Sattari in North Goa to oppress the locals, after which they “betrayed the land and the state” and sought refuge with the Portuguese.

The film says that in 1677, the Portuguese Governor, Conde De San Vincent, had given an “open warning to Hindus” that said that “if you want to live in Bardez (in North Goa), you will either have to abandon your religion or leave Bardez”. This, the film, says was not acceptable to Shivaji, who attacked Colvale Fort with 5,000 soldiers, after which the Portuguese surrendered in three days. The film says that Shivaji was the first Indian king to defeat the Portuguese.

The film also speaks of the Portuguese destroying the famous Saptakoteshwar temple in Goa. The temple, the film says, was a symbol of the glory of the Kadamba dynasty of Goa. Rebuilt in 1668, the temple in Bicholim was the heritage of Goa’s past, the film says.

The film also speaks of the role of Shivaji’s son Sambhaji and after him, his brother Rajaram and Sambhaji’s Shahu in taking Shivaji’s legacy forward. It speaks of Goans holding high positions in the Maratha court.

Towards the end of the film, Sawant says that in the 60th year of the liberation of Goa from Portuguese rule, the state government had made “an effort to immortalise” Shivaji and was working towards renovating and reconstructing the forts and temples built by the king.

“Many historical incidents will be glorified and commemorated in the 60th year of Goa’s liberation,” he said.

Sadguru Brahmeshanand Acharya, a spiritual leader who has a wide following in Goa, tweeted that the film was the “real history” of Goa presented by the government. “CM @PramodSawant ji yes you r real son of Mother Goa. After many years nationalist CM of Goa done this daring to show real history of Goa. Let it go viral in other languages too,” he posted.