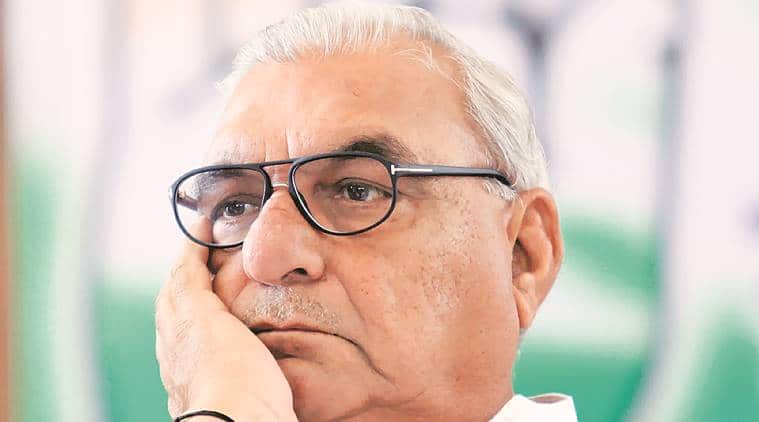 Congress leader and former chief minister Bhupinder Singh Hooda Saturday said if voted to power, Congress will get either give jobs to the unemployed graduate and post-graduate degree holders, or give them a monthly allowance of Rs 7,000 and Rs 10,000, respectively.

“After coming to power, Congress will give Rs 5,000 old-age pension, waive off the debts of farmers, poor and backward castes, provide free electricity to farmers who own upto two acres of land, the government employees will get pay scale at par with Punjab, post-graduate unemployed will either get jobs or Rs 10,000 per month allowance while those holding graduate degrees to will either get job or Rs 7,000 per month allowance,” Hooda said.

He was addressing the Congress workers during a meeting in Rohtak.

Hooda, who was recently appointed the CLP leader, also raised the issue of unemployment and targeted BJP government on various other issues including law and order, farmers’ issues and loss of 80 human lives during three violent agitations in Haryana during the five-year tenure of Manohar Lal Khattar government.

Hooda and state Congress Kumari Selja are on a staewide tour holding workers meeting in different parliamentary constituencies while finalising preparations for the Vidhan Sabha polls.

Selja asked party cadres to work hard as “the examination time has come”. Taking up the issue of unemployment, Selja said, “Because of wrong policies of this government, youngsters have realised how dark their future is. People are now determined to oust this BJP government from Haryana”.

Three-time MP from Rohtak, Deepender Hooda said that “the winds of change willl begin to blow from Rohtak” and the political regime in the state will change. “In the last five years, this BJP government has caused immense damage to the state. We must join hands and oust this arrogant government from Haryana in the upcoming polls”.

Haryana No 1 in joblessness, ironical that BJP seeking votes in name of jobs: Swaraj India

The Swaraj India Saturday said it will soon come up with a concrete road map for full employment in Haryana, where it said more than 20 lakh people were unemployed.

The outfit’s state president, Rajeev Godara, said that after an RTI application revealed that 15 districts of Haryana had more than 15 lakh unemployed, the Manohar Lal Khattar government had dubbed the date as fake in the state Assembly. He said that a report by the Centre for Monitoring Indian Economy (CMIE) for the period of May-August, has now revealed that Haryana 20.20 lakh unemployed people.

Party vice-president and spokesperson Anupam said that the stark and sad reality of joblessness was visible in the state during the ongoing tests for Haryana SSC. “Nearly 15 lakh applicants are vying for for 4,858 posts of clerks advertised by the HSSC. Over 20 lakh unemployed and an unemployment rate of 28.7 per cent clearly prove that Khattar government misled the citizens of Haryana on the issue of employment. It’s ironic that on one hand, Haryana has become the number 1 state in the country in terms of unemployment but the BJP, which has pushed the state into darkness, is out to seek electoral blessings in the name of employment generation,” he said.

Opposition parties, which until few days ago weren’t even conscious that Haryana faces an issue of unemployment; are now trying to follow in the footsteps of the Swaraj India, he added.

Party state general secretary Deepak Lamba said that it was due to these reasons that Swaraj India started the “Main bhi berozgar” campaign in Haryana, under which party volunteers are traveling from village to village to reach out to the unemployed masses. Swaraj India will come up with a concrete road map in the coming days to end the unemployment crisis in Haryana. “Youth will give a befitting reply to this government.” he added.