In a twist Sunday, Gurpal and his supporters switched back to BJP and announced their comeback to the ruling party in presence of Anil Vij. 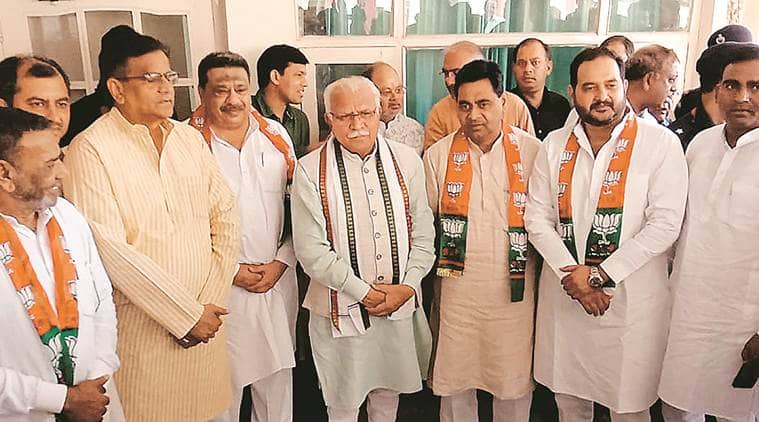 The filing of nomination papers in poll-bound Haryana may be over, but the ruling BJP continues to welcome into its fold leaders from the opposition parties in the state. Fifteen days ahead of voting for in the Vidhan Sabha polls, scheduled for October 21, the newly-formed JJP suffered a jolt when its candidate from Ambala Cantonment joined the BJP on Sunday.

JJP’s candidate Gurpal Majra, who had earlier been a BJP supporter had deserted the party and joined JJP a few months ago. Considering his popularity among the youth and certain other sections of the constituency, JJP had declared him as the party candidate from Ambala Cantonment, currently represented by BJP’s Cabinet minister Anil Vij. Gurpal, earlier this week, had also filed his nomination papers from Ambala Cantonment.

In a twist Sunday, Gurpal and his supporters switched back to BJP and announced their comeback to the ruling party in presence of Anil Vij.

“Gurpal and his supporters had lost way for a few days, but have now come back home. We welcome them all,” Anil Vij said. Gurpal is slated to be withdraw his nomination papers Monday.

The INLD also witnessed a setback when it’s incumbent MLA from Barwala in Hisar district, Ved Narang, left the party and joined BJP in presence of Chief Minister Manohar Lal Khattar in Rohtak on Sunday. The party ticket from Barwala this time has gone to Ravinder Khokha.

Besides Narang, three former MLAs and their supporters too jumped to the BJP bandwagon in Rohtak.

From Fatehabad’s Ratia Vidhan Sabha segment, Congress leader Ramswaroop Rama, who was a Cabinet minister in Bansi Lal’s government in 1996, too joined BJP.

In Sirsa too, Congress leader Bhupesh Mehta left his party and joined BJP.

After welcoming the leaders from other parties into BJP, Khattar said in in Rohtak, “Whenever any politician or party worker joins BJP, first of all a background check is conducted on him. If the aspirant fulfills our party’s parameters, then only he is allowed entry. BJP is a party of principles that has a sole objective of serving people”.

Sharpening his attack on Congress, Khattar added, “The accusations levelled by Congress’s former state unit chief Ashok Tanwar is nothing new in Congress. It is an old tradition of Congress. Not only in the state units, the same chaos prevails in party’s central leadership as well. Congress is a family-centric party, which is full of dynasty rule. That is the prime reason of Congress’ current condition”.

Although several BJP leaders welcomed Sampat’s decision to join BJP, but Sampat did not formally announce his joining. BJP sources claimed that Sampat had put forth certain conditions that “were not yet considered” by Khattar. However, late in the evening, Sampat Singh told The Indian Express that it was a meeting by “coincidence”.

“Although, I am extremely upset with what Congress did to me by not giving me a ticket to contest at the behest of Kuldeep Bishnoi, but I have not yet made up my mind. I am in touch with my supporters and will take a decision soon. First, I have to decide whether to stay in Congress or quit, rest shall follow. I was coming back from Delhi and had stopped at Taliyar. The Chief Minister was also there. I just met him out of courtesy. People construed that I was joining BJP. I have not taken any such decision, yet,” Sampat Singh added.

Talking to media persons in Rohtak, Khattar, said, “Prof Sampat Singh is a good person. He had good performance while serving as a minister. Several checks and balances are adopted before anybody is made to join the BJP. If he joins, we will inform you all.”