The sighting of a juvenile red-headed vulture bodes well for the species, whose population has dwindled to critically endangered due to poisoning of animal carcasses by locals and nesting challenges. “Please don’t mention the exact place where I saw them. If we let people know, at least 500 of them would be here with cameras tomorrow and invade their privacy.” Santhana Raman, lawyer and bird enthusiast, can’t control his excitement when talking about his sighting of a mature pair and a juvenile of the red-headed vulture species on his visit to the Moyar valley in the Nilgiris.

“Red-headed vultures were widely distributed all over the subcontinent a few decades back, but now, their population has declined to two-digit numbers,” explained Raman.

The Moyar valley and the nearby Sigur plateau in the Nilgiris, are among the few remaining places in India where vultures can be found. The region is home to four vulture species, including the red-headed vulture.

Due to their appearance, a common assumption is that vultures are bloodthirsty creatures. This is incorrect — vultures are scavengers that eat animal carcasses. They usually track carnivores and feed on what predators kill.

Rotting bodies are cleared up quickly by vultures, thus preventing the spread of infections from dead animals to healthy ones. Scavenging by vultures helps protect livestock populations. But scavenging off carnivores’ kills has proven deadly for vultures.

“To take revenge on carnivores (that may have caused livestock loss), local people often poison the carrion of dead cattle and leave them for predators in the forest,” explains Dr B Ramakrishnan, who teaches wildlife biology at Government Arts College, Udhagamandalam. “They never thought it would hurt the scavengers.”

This indirect poisoning is the main cause of vulture population decline in southern India.

It is different from the diclofenac poisoning that caused mass deaths of vultures in northern India. A painkiller for cows and other livestock, Diclofenac was found to be toxic to vultures. It was later banned for veterinary use, to conserve vultures.

Although not targeted at vultures, the poisoning in the Nilgiris is deliberate and requires a different conservation approach.

“NGOs, bird enthusiasts, and the Forest Department are now trying to raise awareness about vultures among locals. The compensation package for cattle loss has also been increased by the government,” says Ramakrishnan.

Arulagam, an NGO, conducts puppet shows in tribal and other local hamlets to impress upon people the need for conserving vultures.

“The dropping of these species is highly acidic and can harm vegetation. So, farmers push the vultures away. That is another reason for the population decline,” adds Bharathidasan, a founder of Arulagam.

Red-headed vultures are considered monogamous and lay only one egg at a time. Breeding requires high availability of food, water, and nesting trees. With a growing practice of burying cattle corpses, low rainfall and dry streams, and loss of Neer Marudhu or Marudham trees (ideal for nesting), the breeding pattern of vultures has changed. This hampers their population growth. 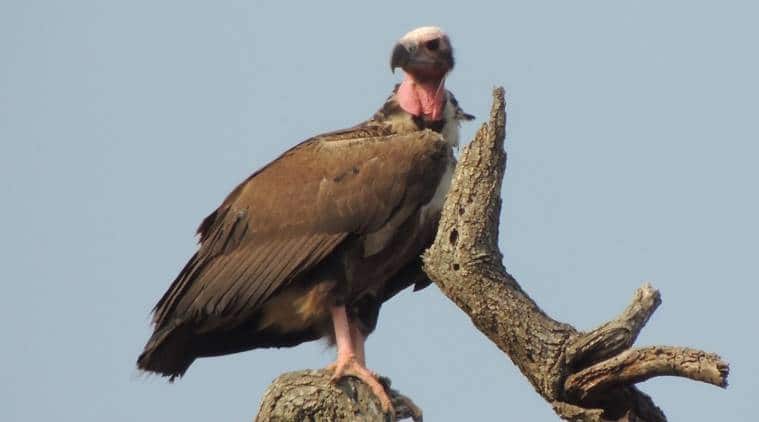 Responding to the problem, the Mudumalai Tiger Reserve, covering Sigur and Moyar, has started conserving vulture nesting sites. It has built a small pond for watering and established feeding stations for nestlings, which often falls from the 40-foot Marudham tree while learning to fly. The Forest Department has planted Marudham saplings near the Moyar river.

Also in the works, at the tiger reserve, is a vulture rescue, rehabilitation, and breeding centre.

With growing awareness, the practice of poisoning dead cattle has come down in recent years. And the population of vultures in the region is gradually increasing.

According to Bharathidasan at least 400 pairs of healthy adults are needed to retain the species successfully. “As of now, we have only 15–20 red-headed vultures. Protecting every single bird is important.”