Use of drones in agriculture can create a $100-billion GDP boost and help millions get better livelihoods. 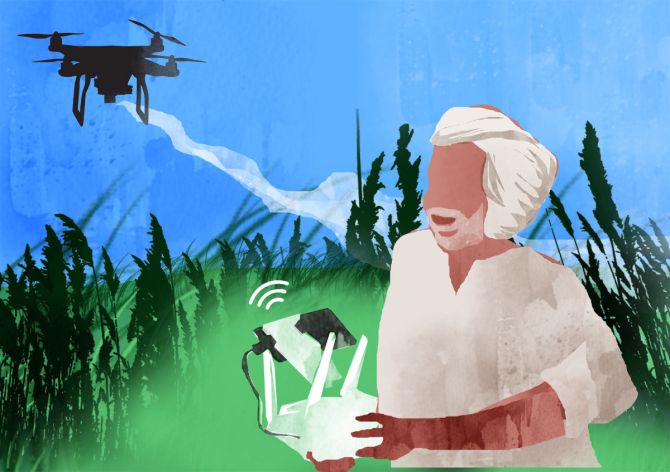 So far, the drones that were considered important for the agriculture sector were nature-made winged-insects — a key component of the bee-based natural pollination cycle.

The new-age drone is a whirring machine with rotors that can help farmers plan and grow and manage their crops.

For the farm sector in India, which has had low levels of mechanisation, the impact of drones can be tremendous.

The use of drones can help it leapfrog to modernisation in the same way that mobile phones helped India overcome its traditional lack of connectivity.

The Using Technology to Improve a Billion Livelihoods report has been prepared in collaboration with the Adani Group.

It says that the use of drones in agriculture can create a $100-billion GDP boost and help millions get better livelihoods.

“Drones are poised to be an effective tool to support farmers reduce their operating costs and efforts, while at the same time optimising their input use.

“There are multiple uses for drones, including surveying, seeding, spraying, pollination, etc. that are at different stages of technology and business model maturity,” the report says.

There are several areas where drones are making their presence felt.

Several policies of the government are now promoting the manufacture and use of drones not just in agriculture but other sectors.

A mission on agri mechanisation will support the use of drones, while the Drone Shakti programme will promote drone-as-a-service across the country.

The PLI and export promotion incentives are expected to bring $50 billion of investment in drone production.

Krishi Vigyan Kendras (KVKs) under the Indian Council of Agriculture Research have been working in the fields with farmers to educate and propagate the use of drones.

It has run pilot projects in Kerala for pesticide-spraying, with surprisingly positive results.

Another KVK in Tamil Nadu bought a drone for field trials and demonstrated unprecedented efficiency.

A drone with the capacity to carry up to 10 litres of pesticide can cover 30 acres per day.

According to reports, the trials have revealed that the drone could complete spraying pesticides in a few hours, which would take two farm labourers more than a day.

Contrary to perception, the use of drones will not hurt livelihoods in agriculture. Instead it will help farmers overcome the rising problem of labour shortage in agriculture.

Farm labour is becoming scarce and expensive, as most workers prefer other opportunities, including in employment guarantee schemes.

So far, drones have been used in such pilot projects or have been adopted by relatively large farm-holding owners.

The WEF report has recommended that nine key stakeholders need to work in cohesion to ensure that drones are widely deployed in agriculture.

“Smallholding farmers may not have the capacity to purchase drones outright or even operate and service drones if obtained through subsidy schemes,” the WEF report says.

Therefore, the “drones-as-as-service model would be ideal to cater to all classes of farmers, especially smallholding farmers.”

Rural livelihood creation will occur through a value chain where each of India’s 593,615 inhabited villages would be supported by a drone and a supplementary team of trained rural youth to operate the drones, the report reasons.

A comprehensive approach could prove that mechanical drones are as valuable as their natural inspiration.