The shop — like so many bookstores around the country — had brushes with death, caused not only by e-commerce but also by fire and flood, before encountering a rent hike it could not withstand in 2018. The beloved institution, where students, artists, scholars and fans could browse memoirs and bone up for auditions, was in danger of closing 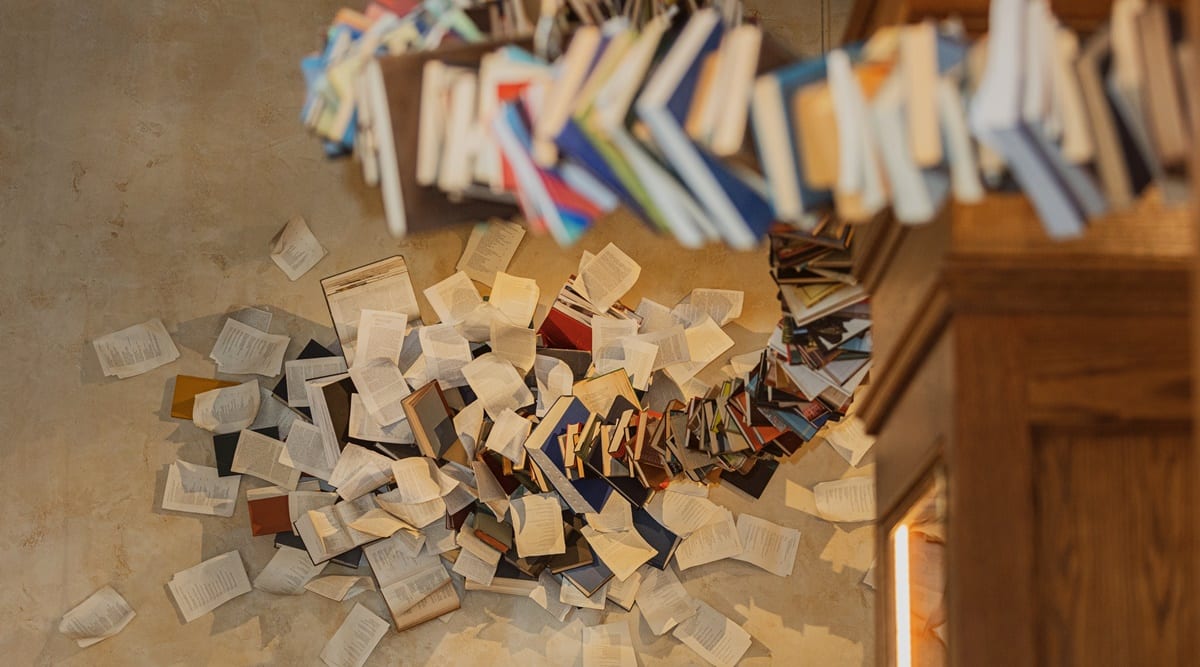 A sculptural representation of a bookworm — 140 feet of scripts and songbooks, twisted along a steel skeleton — corkscrews across the Drama Book Shop in Manhattan. It starts with ancient Greek texts and, 2,400 volumes later, spills into in a pile that includes “Summer: The Donna Summer Musical.”

This 3,500-pound tribute to theatrical history is the centerpiece of the century-old bookstore’s new location, opening Thursday on West 39th Street.

The shop — like so many bookstores around the country — had brushes with death, caused not only by e-commerce but also by fire and flood, before encountering a rent hike it could not withstand in 2018. The beloved institution, where students, artists, scholars and fans could browse memoirs and bone up for auditions, was in danger of closing.

Then came an unexpected rescue. Four men enriched by “Hamilton” — the musical’s creator, Lin-Manuel Miranda; its director, Thomas Kail; its lead producer, Jeffrey Seller; and the theater owner, James L. Nederlander — bought the store from its longtime owners. Kail has a particularly close relationship with the shop; 20 years ago, just out of college, he formed a small theater company in its basement. After he teamed with Miranda, the two worked on “In the Heights” there. The bookstore is opening the same day that a film adaptation of “In the Heights” is scheduled to be released in theaters and on HBO Max, and Kail noted the thematic connections.

“‘Heights’ is about a different place in Manhattan where rents are going up and businesses are getting forced out,” he said. “There’s an obvious and clear line.”

The “Hamilton” team closed the store’s previous location on West 40th Street in January 2019 and put its contents in storage, anticipating reopening at a still-to-be-determined location later that year. But New York real estate being what it is, finding that location and renovating it took longer than anticipated. Then the pandemic arrived, closing theaters, disrupting the retail and tourism sectors, and quieting midtown.

Now, the Drama Book Shop is back, just as Broadway gears up for a late summer return.

Like many bookstores, the owners hope to augment their income with a coffee bar and food. But there’s a personal flourish: Among the coffees sold will be a blend from Puerto Rico, part of Miranda’s effort to support farmers on the island where his parents are from.

“My hope is that we can continue to be a hub for the theater community,” Miranda said. “I don’t expect we’ll make a great fortune, but I hope with the coffee we’ll break even.” The interior — 3,500 square feet on the main floor, plus a 3,000-square-foot basement — is designed by David Korins, the “Hamilton” set designer. There’s an octagonal banquette inspired by a piece of furniture in the 1940 film “The Shop Around the Corner” and, for “Hamilton” fans, a pair of armchairs that are replicas of the one George Washington sits in during the musical’s Cabinet battles.

Because of continuing concern about the coronavirus, the store will have a capacity limit when it opens; the owners are recommending that people make free reservations online, but there will also be a line for those without reservations.

Asked what he hopes to see once the shop is open, Korins said, “Everyone would hope the next Lin-Manuel Miranda and Tommy Kail will be sitting there, conjuring up their next project.”