Small gestures from Indira gave Sonia the confidence that she could be a daughter-in-law in the distinguished family.
On Congress President Sonia Gandhi’s 74th birthday, Rediff.com presents a fascinating excerpt from Rasheed Kidwai’s book Sonia – A Biography.

Sonia was born on 9 December 1946 in Orbassano, in northern Italy.

For the family, Sonia, the second daughter, was a little princess, their Cenerentola, or Cinderella.

The nickname was not entirely fortuitous.

Unlike her sisters, Nadia and Anushka, Sonia always wanted to be different.

She was ambitious, though she confided little about her ambitions.

As a young girl she was never comfortable in the dusty industrial town on the outskirts of Turin where she grew up.

When Sonia lived in Orbassano, the town was a muddle of apartment blocks and houses that had come up in the early 1950s as a result of the post-war boom in northern Italy.

It was too undemanding and lower middle class for a Cenerentola.

She was a good student but not an exceptional one, except in her gift for languages.

She could converse easily in Spanish and Russian.

She would also develop fluency in French and Hindi.

The credit for teaching her Russian goes to her father, who had fought in Russia with the Germans.

He was deeply influenced by the Russian language, culture and food and loved the country.

Little wonder then that he gave Russian names to his three daughters.

Stephano was hard working and disciplined, a quality that he passed on to his family, especially Sonia.

As a self-made man who had been through some very tough times, he took pride in providing for his family.

He had come to Orbassano from Asiago in the Veneto region as a poor mason and made good in a small construction business through his dedication and fair dealing.

Stephano brought up his daughters in the traditional Catholic way and was wary of foreigners.

He was not charmed when Sonia informed him about tying the knot with the Indian Prime Minister’s son.

His inflexibility on this count estranged him from Sonia, so much so that he did not attend Sonia’s marriage and predicted that it would end shortly.

Sonia’s maternal uncle Mario Predebon gave away the girl in the civil marriage that took place on 25 February 1968.

In Cambridge, Sonia stayed as a paying guest with an English family.

She was homesick, and her unfamiliarity with the language didn’t help.

It was a difficult time for her.

As she recounts in Rajiv, she used to feel miserable and homesick.

Her search for Italian food led her to Varsity, a Greek restaurant, the next-best option as she failed to find an Italian one, and to her introduction to Rajiv Gandhi.

Each evening, noisy groups of students from Cambridge University would gather there over a pint.

For Sonia, one of the boys in that large group always stood out.

As she described him, ‘One with big, black eyes and wonderfully innocent and disarming smile.’

Rajiv made the first move using a common friend, Christian, who played the go-between.

He was a German who was also doing the language course and, luckily, fluent in Italian.

One day at lunchtime, he introduced Rajiv to Sonia, who recalls, ‘Our eyes met for the first time directly at a close distance. I could hear my heart pounding. As far as I was concerned, it was love at first sight. He later told me that it was for him too.’

Rajiv asked her out and within days, they became close.

They began going out for picnics on the riverside and to jazz performances.

A year later, Rajiv visited the Maino house in Orbassano.

Late in the evening when he met Stephano, he came straight to the point by asking for Sonia’s hand.

He was suspicious of foreigners, but Stephano had no doubts about Rajiv’s determination to marry his daughter.

He made no concessions wondering how his daughter would possibly get used to life in India.

He then told Rajiv and Sonia not to meet for a year and then see if they still wanted to spend the rest of their life together. 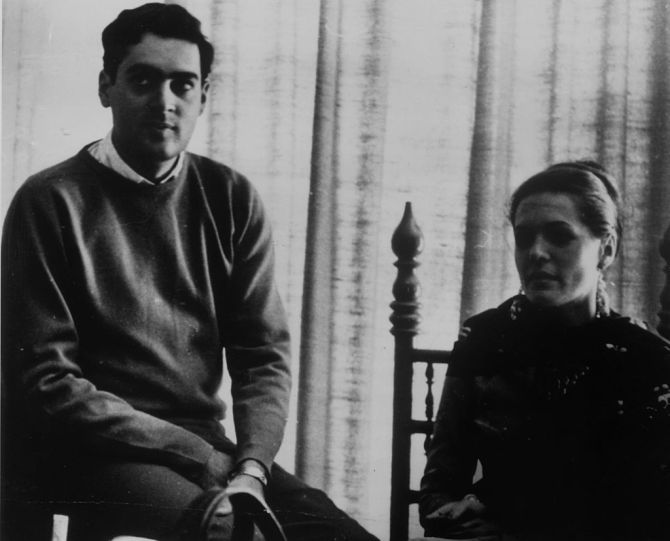 The one-year forced separation was the most difficult period for both Rajiv and Sonia, but a year later, they were even more deeply in love.

A man of his word, Stephano had no choice but to accept the inevitable.

The old man’s pride, however, came in the way of his attending the marriage.

Rajiv wrote regularly to her and told her about Sonia.

She agreed to meet her in London where she was going to inaugurate an exhibition on Jawaharlal Nehru.

The meeting at India House, London failed to take place as on the way there Sonia completely lost her confidence.

Rajiv and Indira were understanding.

The meeting was re-scheduled at the residence of the Indian high commissioner.

Sensing that Sonia was uncomfortable, Indira spoke to her in French, in which Sonia was much more at ease.

Recalling the meeting, Sonia wrote, ‘She spoke to me in French, knowing I was more fluent in it than English. She wanted to know about myself, my studies. She told me that I need not be frightened because she herself had been young, extremely shy, and in love, and she understood perfectly.’

She and Rajiv got engaged in a simple ceremony twelve days later.

As the prospective bahu of the Nehru-Gandhi family, Indira Gandhi did not want her to stay with them and staying at a hotel was out of the question.

Her aide and confidant T N Kaul and family friend Mohammad Yunus suggested that Teji Bachchan play host to the bride, and the matter was resolved.

Amitabh, yet to become a superstar, was Sonia’s first friend in India.

The marriage took place on 25 February 1968 on the back lawns of 1 Safdarjung Road after a brief mehendi ceremony at the Bachchans’.

The civil marriage was a simple affair.

Rajiv wore a cream silk Patiala achkan and choodidars with a pink Bharatpuri turban while Sonia wore a pale pink khadi sari without much jewellery.

There was only light refreshment at the wedding.

In the evening, however, there was a lavish dinner at Hyderabad House, off India Gate, where official banquets are held, to which about 250 guests were invited.

The guests were seated on the floor and served a sumptuous Kashmiri banquet.

A day later, Indira hosted a reception at the Ashok Hotel at which choice Parsi, Kashmiri and Italian cuisines were served to the one thousand invitees.

Excerpted from Sonia – A Biography (Penguin) with the author Rasheed Kidwai’s kind permission.