Prime Minister Narendra Modi on Tuesday asserted that there is a “huge difference” between pre- and post-2014 India, saying the country is now moving ahead at an “unprecedented speed and scale” as he showcased the achievements of his term in power to the Indian diaspora in Indonesia.

The prime minister took time off the G20 Summit in Bali’s Nusa Dua to travel a few kilometres away to a hotel ballroom in Sunur, where members of the Indian community welcomed him with chants of “Modi, Modi”.

Addressing the Indian diaspora, Prime Minister Modi said India is a ray of hope for the world in the 21st century. He highlighted India’s growth story, its achievements and tremendous strides that India is making in various fields such as – digital technology, finance, health, telecom and space.

He also mentioned that India’s roadmap for development includes the political and economic aspirations of the world and the vision of self-reliant India embodies the spirit of global good.

As the gathering clapped, he said, “The huge difference between pre- and post- 2014 India is that of speed and scale.” The Modi-led Bharatiya Janata Party government was voted to power in 2014. The ruling BJP again swept back to power in the 2019 general elections.

Though Modi was indirectly referring to the term of his government at the Centre, he stopped short of naming previous governments, or any particular political party.

“We don’t dream small anymore. Since 2014, we have opened more than 320 million bank accounts. More than the population of USA,” he said.

“Today, India is the fastest growing large economy in the world,” Modi said amid a huge round of applause. 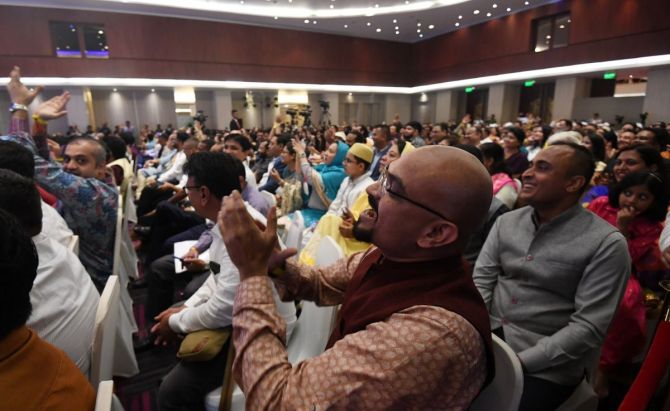 He also listed out the areas in which India is now world’s ”number one” — including smartphone data consumption, IT outsourcing and manufacture of certain drugs and vaccines.

Modi said Indonesia was fortunate to attain independence two years before India and there is a lot that India can learn from Indonesia.

However, at the same time, he said, in its 75-year-old long development journey, there is a lot that India can also give to Indonesia.

“The talent, technology, innovation and industry of India have made an identity for themselves in the world. Several big companies of the world today have an Indian-origin CEO,” Modi said.

Modi also ticked off several other boxes for the audience — including the length of new roads built in the last few years, the houses for the poor and the Covid vaccine doses administered so far. And he asked his audience if they didn’t feel proud of these achievements.

He spoke about the positive trajectory of India-Indonesia relationship. He stressed on the cultural links between Indonesia — particularly Bali — and India and reminded his audience that people in Odisha’s Cuttack are right now celebrating a festival called “Bali Jatra.”

He also made a passing reference to the construction of the Ram temple in Ayodhya.

“There would hardly be anyone in Bali who doesn’t wish to visit Ayodhya or Dwarka in their lifetime,” he added, while elaborating on the affinity he felt with Indonesia and the island of Bali.

He mentioned the Sindhis, the Tamils and the Bohras among the communities from India whose members now live and work in Indonesia, making it their “karmabhoomi”.

He talked about cultural links of “thousands of years” between India and Indonesia, referring also to the celebration of Sankranti, and the statues of Lord Ganesh, often seen at public places in Indonesia.

Rooted to its heritage, India today aimed to touch the skies, he said. The country also wanted to extend a helping hand to the rest of the world.

Modi recalled a previous visit to Indonesia when he flew kites with President Joko Widodo. 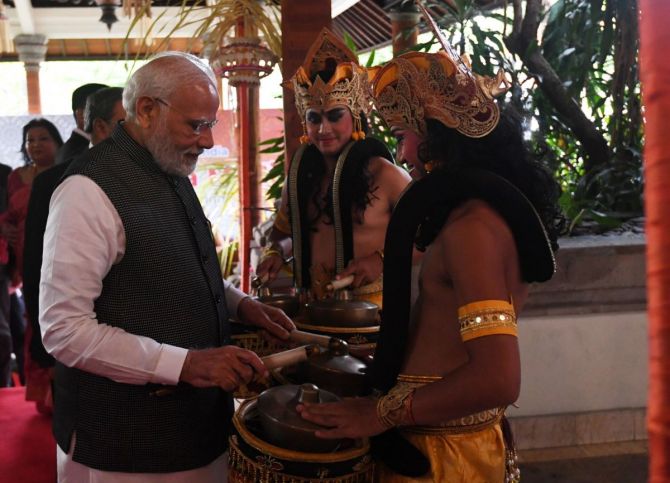 The prime minister invited the people of Indian origin to visit the country on the next Pravasi Bharatiya Divas in January next year. “Don’t come alone, bring an Indonesian family along,” he told the gathering of over 800 people who had gathered from all over Indonesia.

Prime Minister Modi appreciated the community members for enhancing the stature and prestige of India abroad through hard work and dedication to their adopted motherland. He also spoke about the crucial role played by Indian community members in its strengthening in India-Indonesia ties.

Tuesday was the first day of the two-day Group of 20 Summit. India is among the 19 nations — both developed and emerging economies — and the European Union that make up the group.

Modi is in Bali to attend the G20 Summit at the invitation of Indonesian President Joko Widodo.

All photographs from the diaspora event, courtesy: MEA on Twitter