In what started as a pilot project in 2018 in the Sainik School at Chhingchip in Mizoram, the induction of girl students expanded further in 2020, with five more schools turning co-educational by admitting 55 girls. 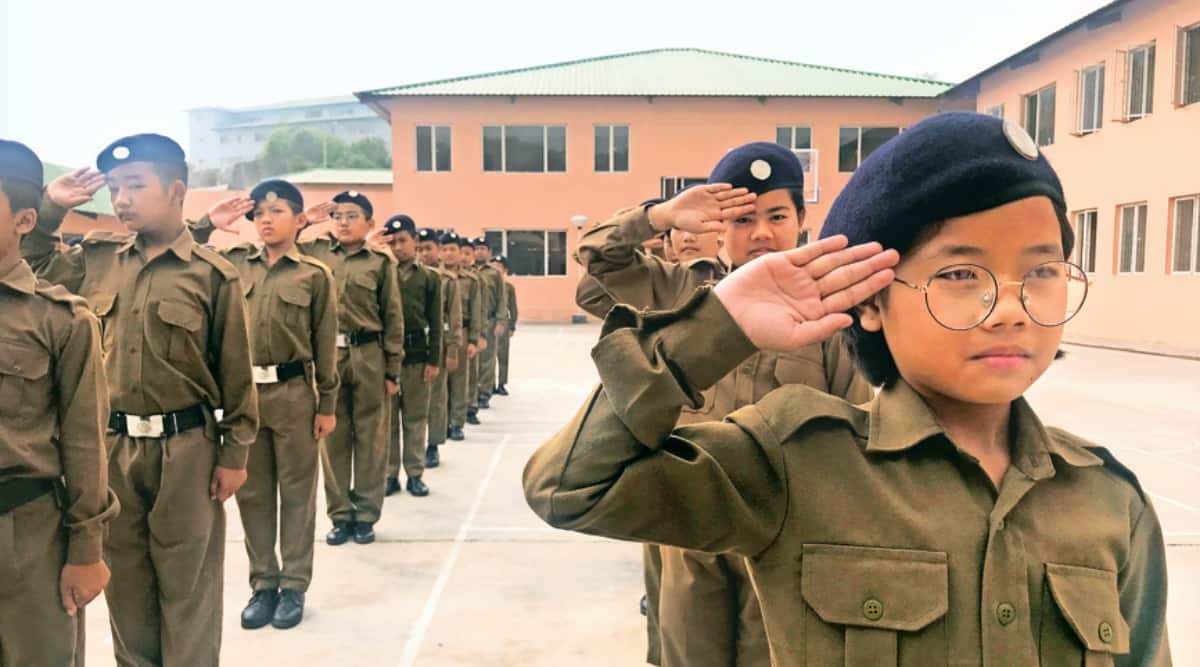 FROM JUST SIX in 2018 to 55 in 2020 and 315 in 2021, the enrolment of girls in Sainik Schools — the six-decade-old institution set up with the “primary aim of preparing boys” for the National Defence Academy — has been steadily rising.

In what started as a pilot project in 2018 in the Sainik School at Chhingchip in Mizoram, the induction of girl students expanded further in 2020, with five more schools — two in Karnataka and one each in Andhra Pradesh, Maharashtra, and Chhattisgarh — turning co-educational by admitting 55 girls.

This year, with all 33 Sainik Schools across 24 states and one Union Territory shedding their only male status, 315 more girls secured admission after clearing the All-India Sainik School Entrance Exam which tests a candidate’s skills in Mathematics, English and General Knowledge.

Vaibhavi Dalai is among the 10 new entrants in Sainik School, Bhubaneswar, aspiring to join the Indian Air Force. “There are a lot of extracurricular activities like horse riding and swimming which I did not have in my previous school. I love the school campus and have a great time studying and participating in all activities,” Vaibhavi said, gearing up to meet Prime Minister Narendra Modi at a Jhansi event next week which will be attended by girl cadets from Sainik Schools across the country.

In another corner of the country, a student of the first-ever batch of girls at the Mizoram school said the experience has been “great” so far, despite Covid-19 keeping them away from campus since March 2020. “With more girls, it is nice… most boys are still childish and tease us,” she says with a laugh. Her classmate hopes that the boys have hopefully matured in the last two years.

With the induction of girls, the government has remitted Rs 92.48 crore towards an infrastructure upgrade to the Sainik School Society. The funds are to be disbursed among the schools as a one-time special grant to create facilities including hostels, a Defence Ministry source told The Indian Express.

With schools on virtual mode for much of the last two years, authorities are yet to confront any major logistical challenges. “We are awaiting permission for the construction of the girls’ hostel. When the classes started, we had prepared a wing of our base hospital to work as a makeshift dormitory for the girls. However, since classes are still online, we didn’t have to use it,” said a senior staffer of Sainik School, Ambikapur, Chhattisgarh, which admitted nine girls in the 2021-22 session.

Sainik Schools are established after approval by the Ministry of Defence and in collaboration with states. The state provides land and funds for creation and maintenance of basic infrastructure, purchase of equipment and other facilities besides scholarships for cadets belonging to the state.

Accordingly, the Odisha government sanctioned Rs 6.5 crore for the construction of a 100-bed girls’ hostel. “For now, we have a 12-bed infirmary as a makeshift facility to accommodate the girls. For existing students, we recognise it is important to sensitize them to be accommodative and receptive about this change. The new students are academically strong, having cleared the entrance examination with higher cut-offs and it would challenge our boy students to keep improving themselves with better competition now,” Sainik School Bhubaneswar Principal Group Captain S Dominic Ryan said. The school will switch to offline mode from Monday.

A Defence Ministry official said works in the schools are likely to be undertaken in nine months to a year after finalisation of detailed estimation, planning, and tendering which may take three months after approval. “The girl cadets are to be trained with the boy cadets. They will follow the same modules in academics, physical training, sports, and other co-curricular activities for their overall growth. This decision opened doors of quality training of girl cadets at par with boys. It can be seen as a first step towards entry of women in the National Defence Academy,” he said.

Wing Commander Shahul Hameed, Principal of the Mizoram school, said they do not have a separate female Physical Education teacher for girls yet. “But our idea is to make them feel at par with the boys. They are not any less than the boys and that is the confidence they should have. So, we conduct everything together,” he said.

However, parents of a girl cadet enrolled in the school said the authorities could work on

lessening the segregation between girls and boys during sports. “During competitive games, girls and boys do not mingle much – I think it is important they play together… otherwise there is not much of a competition with only 12-15 girls present. So, I feel there could be more mixing but that is my opinion,” a parent said.

Temburu Tirupati, parent of Medha Priya, a new entrant at the Bhubaneswar school, said now that his daughter has secured admission, he has asked his younger son “to start preparing and follow in his sister’s footsteps”.