Vadakara has been a stronghold of socialists for decades, having elected stalwarts like K B Menon to Parliament. 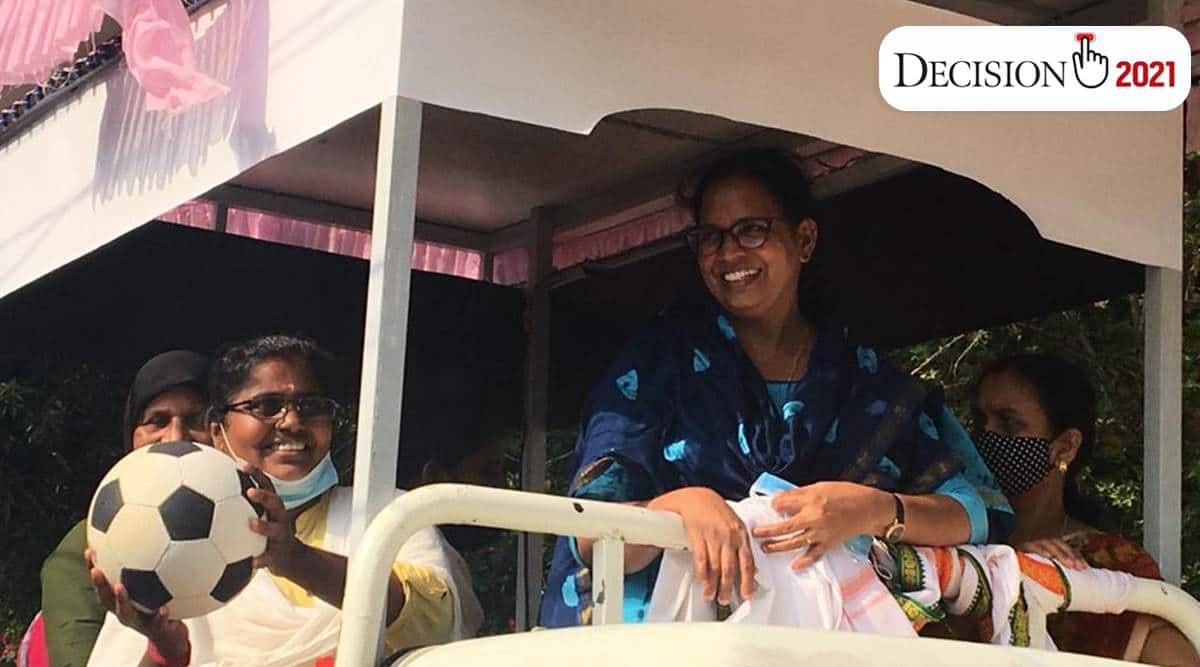 From the distance it looks like a cross. But it’s just a long pole with a crossbar, on both sides of which hang two small, white frocks with marks that look like blood stains. Accompanying it are half-a-dozen people who make up the campaign team of the woman who has been dubbed the ‘Walayar mother’, and who is contesting as a candidate from Dharmadam, the CPM fortress from where Chief Minister Pinarayi Vijayan is standing for re-election.

Long way from home, in Walayar, a town near Palakkad on the Tamil Nadu border, she hands out pamphlets — to everyone, in shops, those walking past her. They stop, listen, but few engage with her. Making a halt at a bus stop on the highway connecting Dharmadam to Kozhikode in the south and Mangalore in the north, she says in simple, clear Malayalam: “I want justice. I was promised justice by the CM, but the government is protecting the police officers who subverted the investigation into the rape and murder of my two children aged 9 and 11.”

Three months apart in 2017, her two daughters had been found dead under dubious circumstances. Following protests, arrests were made, but the men were later acquitted, with the court saying the prosecution had failed to prove its case against them. In January this year, the Kerala High Court found serious lapses in the probe and ordered a retrial. The state government has since handed over the case to the CBI.

The mother (her name is being withheld due to POCSO curbs) had tonsured her head to protest against the alleged shielding of the police officials, and has been travelling across the state to highlight her case. She is now one of the candidates for the April 6 election, with the frock as her poll symbol.

She says people have been receptive and even given her small contributions, though a CPM supporter wonders why she is targeting the state government after it had handed over the case to the CBI.

In a seat that Vijayan won by over 36,000 votes in 2016, the Walayar mother is unlikely to dent even the victory margin. But, she says, “I will continue my fight irrespective of the election outcome. No child should die the way mine did. No father or mother should henceforth have to tonsure their head and beg for justice.”

To the south of Dharmadam, in Vadakara, another woman candidate is taking on the CPM. K K Rama is the widow of T P Chandrasekharan, a popular Communist leader who was hacked to death in 2012 allegedly on the orders of the CPM leadership after a falling-out with the party. A candidate of the Revolutionary Marxist Party (RMP), backed by the Congress-led UDF, Rama is given a good chance by many against her main rival, a local Janata Dal leader, Manayath Chandran. A former Students’ Federation of India activist, Rama is at ease addressing crowds, and has been attracting women in large numbers at neighbourhood meetings.

Vadakara has been a stronghold of socialists for decades, having elected stalwarts like K B Menon to Parliament.

Rama says her fight is against communal and political fascisms. Her campaign pitch is to free politics of violence. It has resonance in a region where scores have been killed in clashes mainly involving RSS and CPM cadres. While the RMP, a party of former CPM workers, has only pockets of influence in the area, Chandrasekharan is still remembered in the area.

The RMP was initially divided over accepting UDF support for ideological reasons — Chandrasekharan’s rebellion against the CPM had been over the party’s “deviation to the right”. But pragmatism appears to have prevailed over ideology.

However, can the politics of Walayar mother and Rama focused on morality and justice find an audience in the din of elections? The campaign is dominated by the development narrative of the LDF government and corruption allegations made by the UDF, with Sabarimala emerging as an undercurrent.

J Devika, professor at the Centre for Development Studies, Thiruvananthapuram, says an election is not just about choosing representatives. “It is also an occasion when you use platforms to send across your message to the larger public.” For instance, Rama’s candidature forces a reflection on not just inter-party violence but also inner-party violence within the CPM, she says. It forces the Left to introspect, she argues.

Incidentally, former CM and senior CPM leader V S Achuthanandan had built moral politics around such social issues, which had helped the CPM widen its support base.

The protest contests of Rama, the Walayar mother and Lathika Subhash, the Mahila Congress chief who quit the party after being denied a seat and is fighting as an Independent, also flag the absence of women candidates and the toxic masculinity of Kerala’s political culture. Economist K P Kannan had described Subhash shaving her head as “tonsuring of the Kerala Model of Development”.

Women outnumber men in Kerala. Girls outnumber boys in colleges, medical schools, top board examinations and so on. But they comprise just over 10% of the candidates fielded by the CPM and Congress. The state has had just 87 women MLAs in 15 Legislative Assemblies since its formation in 1956, and only nine women have won a Lok Sabha election since 1952.