Also called Patuas, these artists are truly special. They are deft at painting stories from Hindu mythology as well as contemporary political parties on a scroll of cloth, and sing the narrative as they skillfully unfurl the painting. 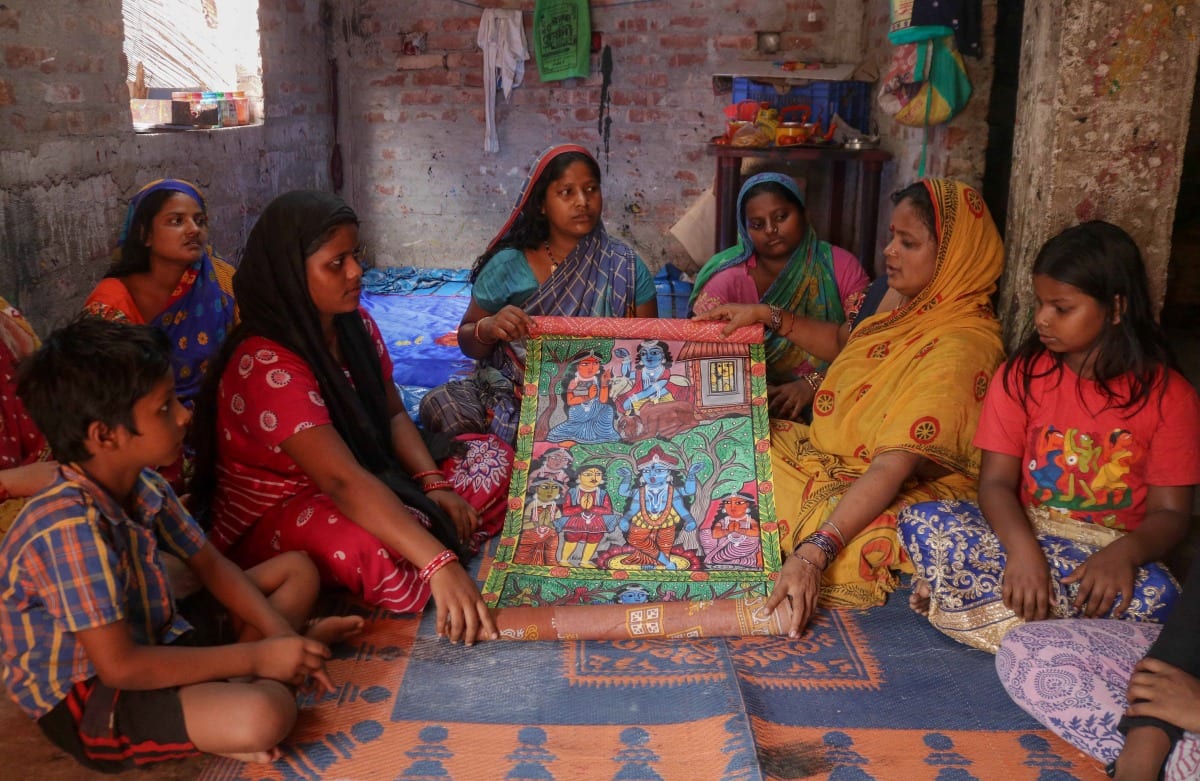 Tucked away among the lush green fields of West Midnapore is a quaint little hamlet in which every home has art on its walls, and artists inside that sing to the tunes of their paint brushes. Naya Pingla is a village of artists where residents like to use the term ‘chitrakar’ as their surname. Also called Patuas, these artists are truly special. They are deft at painting stories from Hindu mythology as well as contemporary political parties on a scroll of cloth, and sing the narrative as they skillfully unfurl the painting.

“My grandfather would paint about Indira Gandhi, then later he and my father created paintings on Rajeev Gandhi and Jyoti Basu. In recent times we have been painting for Modi and Mamata,” says Bahadur Chitrakar (45).

“Modi saab loves the Ramayana, so when BJP leaders commissioned a painting for him, I decided to paint the seven kandas of the epic. Then for Mamata I painted a saree with the theme of Kanyashree on it and another patachitra (scroll painting) with the theme of Khaddoshree on that,” he adds.

Bahadur’s double-storey house in Naya Pingla houses five generations of his family. Apart from being a skilled patachitra artist since the age of five, he is also a fond collector of patachitra paintings from across Bengal which have been put on display at his home. Though not formally educated beyond fourth grade, Bahadur’s social and political awareness comes alive in his paintings. The accompanying songs he has written include one on the Coronavirus and he’s working on one that warns about global warming.

Two days ahead of voting day in his village, Bahadur maintains that he is happy with the current government’s efforts to recognise patachitra artists, but would like to see more national and international platforms available for patuas like him to sell their work. 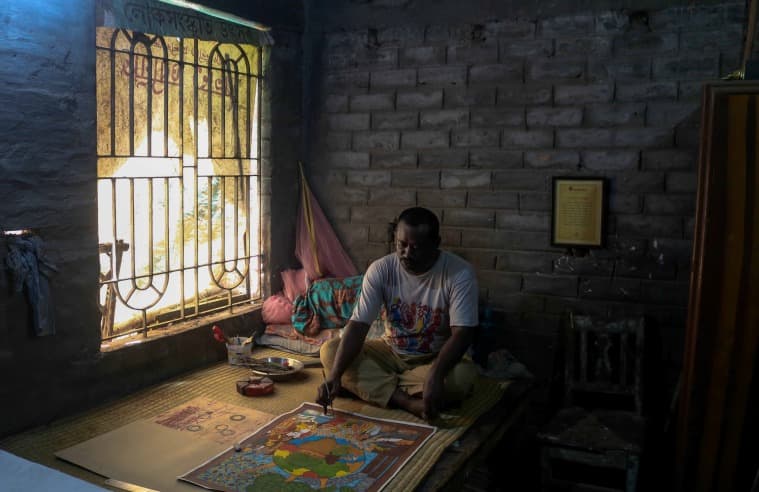 The Pingla constituency is held by Saumen Mahapatra of the Trinamool Congress.

“In our art, we ensure that we don’t express our personal political opinions, the reason being that we travel from place to place singing about our paintings to earn a living. If our audience does not agree with our politics then they would not pay us a penny. No matter who comes to power, as artists we must be impartial towards political parties,” he says.

The social evolution of the Patuas: From religious to political art

Patachitra is believed to be one of the oldest forms of folk painting in Bengal. “Even though there is no written documentation, it is said that among the chief painters in the Ajanta and Ellora caves, one group migrated to Rajasthan and another to Eastern India. These communities traditionally sang the songs of Hindu mythology,” says Ananaya Bhattacharya, co-founder and director of banglanatok.com, a social enterprise that works on sustainable development through culture.

As a group they derived their name from the word ‘patta’ which in Sanskrit means a piece of cloth. David McCutchion and Suhr̥dkumāra Bhaumika, who authored the book ‘Patua and patua art in Bengal’, write that the word ‘patta’ was in fact an Austro-Asiatic word that entered old Sanskrit. Thereby it can be said that the Patachitra painters existed in Bengal before the advent of Brahmanism.

McCutchion and Bhaumika write that when the impact of Brahmanism came to be felt in Bengal, the Patuas began to identify themselves as the ‘Chitrakar’ or artisan caste in Hindu society who are believed to be descendants of Lord Vishwakarma. However, Brahmanical society did not accept them completely.
With the advent of Islam in the medieval era, many among the Patuas became proselytised into Muslim society. “Or it maybe that the tribal patuas wanted to be accepted into Hindu society, but the conservative Hindus did not accept them as an integral part of their society. So they took shelter in Islam,” write McCutchion and Bhaumika. In Islamic society too they are not completely accepted given their occupation of image-making which is prohibited as per Muslim religious teachings. 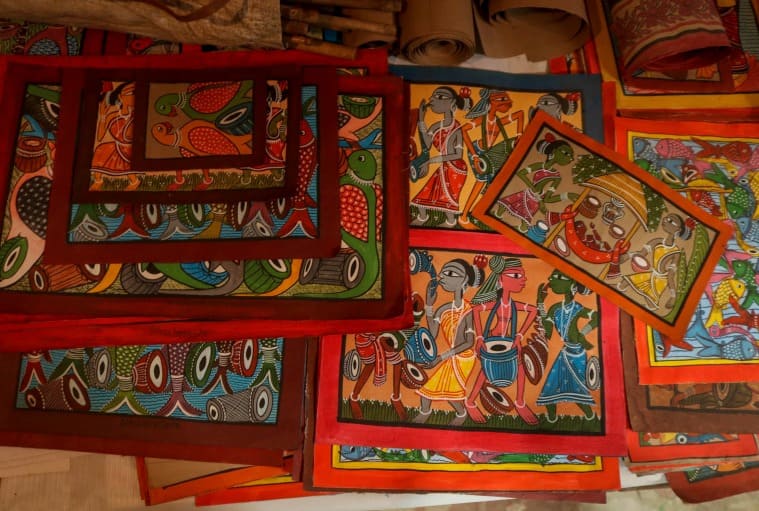 Consequently, the Patua community today has a unique social identity, which is partly Hindu and partly Muslim. “The fact that we face no hesitation in painting and singing about the Ramayana and Mahabharata shows that perhaps at some point in the past we were Hindus,” says Bahadur. At present though, a majority of the Patuas in Naya Pingla are Muslims, even though their names rarely carry a hint of their religion.

Over the years, the content of patachitra artists expanded from religious to social and political themes. In the 1930s, for instance, the Sahib Pat was created to depict the history of the Chaur rebel, the first tribal revolt against British rule in Midnapore district. Then there is the ‘Swadhinata song’ (song of freedom), to criticise the sudden social changes in Bengali rural society after Independence.

There is also a difference in the ways in which patachitra art developed in different parts of Bengal. “If you go more towards eastern Bengal, you will find more pats on Muslim saints like Satya Pir, Gazhi Pir etc. Towards North 24 Parganas, the concentration is more on Bonobibi (guardian spirit of the forests worshipped by the Hindus and Muslims of the Sundarbans) and Manasa (Goddess of snakes),” says Bahadur. There is also the famous Kalighat patachitra which developed in 19th century Calcutta, depicting scenes of everyday life in the city. In Naya Pingla, however, all of these styles come together. Speaking about the political consciousness among the patuas, Bhattacharya says, “They have mastered oral traditions passed on through generations where they learn about mythologies and folklore.”
She adds that over time these artists have gained more exposure. “From a handful of around 10-12 artists in 2005, today about 85 families in Naya Pingla are actively pursuing the tradition. They have innovated within their art forms to respond to contemporary happenings. For instance, when Covid happened, one of the artists, Swarna Chitrakar, who cannot read and write, created a song and painted a patachitra on the pandemic which went viral online. Similarly, when Nirbhaya had happened in 2012, she had painted on that as well.”

The politics of the patachitra artists

Soniya Chitrakar (33) says although she does not generally paint on political themes, she recently created works on the TMC government’s policy of ‘Kanyashree’, which seeks to improve the life and status of girls by providing financial assistance to economically backward families so that they invest in the education of their daughters rather than getting them married off before the age of 18. “I had painted and written a song about the kind of work Mamata is doing to improve the condition of the girl child here, the fact that she is giving financial help for them to go to school and providing them with a bicycle,” she says.

“We are happy with Mamata’s work, especially with regard to the financial assistance she is providing to artists,” says Soniya referring to the Lokprasar Prakalpo Scheme started by the TMC government to restore Bengal’s folk art. As per the scheme, every artist between the age group of 18 and 60 is eligible to be paid a monthly retainer fee of Rs 1000. Although most artists in Naya Pingla have been receiving this amount, Soniya is among the handful who has not received the money and does not know why she has been left out. “Even though I have not received it, most people here have and that has helped a lot in improving the condition of the artists here.”

Probir Chitrakar (34) and his wife Myna Chitrakar (28) who live in a small hut right next to Soniya’s house also haven’t benefited from the scheme. “We have been running about the local councillor’s office for the past three-four years, but they have simply turned us away,” says Probir. “In 2011 we wanted ‘poriborton’ (change), that is why we voted for Didi. This time also we want change in our condition, but whoever comes to power needs to ensure that there is no problem between Hindus and Muslims,” he adds. Apart from the financial assistance, the many handicraft fairs and exhibitions started by the TMC government too have made Banerjee a popular figure among the Patachitra artists of Naya Pingla.
In the past year, however, the lockdown has had a tremendous financial impact on the artists. They say that neither were they able to travel to other places to sing about their art, nor were customers coming to their village to buy their works. The annual Pot Maya festival in the village was also suspended last year on account of the pandemic.

“We went through such a tough time in this lockdown. Had Mamata not provided us with free rice, wheat, dal etc, so many of us would have died,” says Shyamsundar Chitrakar (80). “During CPM rule I did not get anything from the government. About BJP I have no opinion. The prime minister lives faraway in Delhi. How will I know what he will do if the BJP comes to power?” asks Shyamsundar.

Sitting amidst a pile of patachitra paintings in his narrow, tin hut, Dukhoshyam Chitrakar (83) says he has been practicing the patachitra tradition since he was seven. In all these years, he says he has seen the art form evolve significantly. “Now patachitra is no longer performed. The artists paint them on umbrellas, clothes, ash trays etc. Those like me who have held onto the traditional form are in desperate economic condition,” he says. Asked about the financial assistance being provided by the government, he counters, “How can a thousand rupees be sufficient for an entire month given how expensive everything has become?”

“But during the lockdown the current government did stick to its promise of giving us the money every month, along with free ration,” says Dukhoshyam. Asked if he desires a change in government, he replies: “If the BJP comes to power then we will be finished. First let them make a ‘Sonar Gujarat’ (golden Gujarat). They can make Sonar Bangla later?” he asks.

Bahadur agrees that the initiatives taken by the TMC government has helped the patua community. But he is ambitious about the future of patachitra and at the same time apprehensive about the current situation, given that the pandemic has refused to end. “The government is just giving us ration, but that can’t be enough,” he says. “Patachitra needs to reach people outside our small village. The government needs to create better digital infrastructure for us to sell our art without having to go to the people.”