India's Coronavirus cases numbers: The country's coronavirus curve reached its lowest level in the second and third weeks of February, after which it has begun to rise. In the last two days, more than 18,000 cases have been detected. 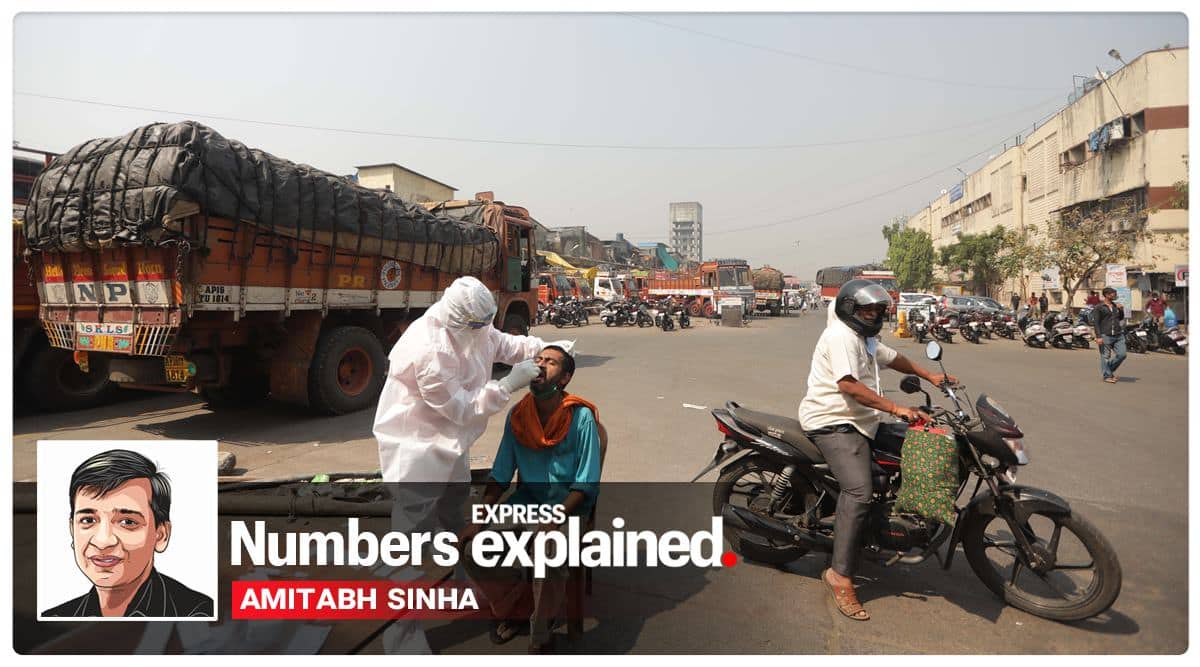 India coronavirus numbers, cases explained: The rise in number of coronavirus cases, which so far looked confined to Maharashtra and Punjab, is now beginning to spread to several other states. Delhi, for example, has reported more than 300 cases for the last two days. It hadn’t done so since January 15. While that might not seem alarming right now, considering that, at its peak, Delhi had been reporting more than 8,000 cases a day, it might just be the beginning of a fresh wave. In Gujarat, the increasing trend is noticeable for three weeks now. In the last two days, the state has reported more than 500 cases, something that had not happened since January 17. The coronavirus numbers in the state had been on a steady decline in the new year, touching a low of 232 on February 8. But it began to rise again after that, and that trend has continued till now. Similar increases are seen in Haryana, Rajasthan and Madhya Pradesh as well. The numbers in these states are nowhere close to Maharashtra, which for the last two days has been reporting more than 10,000 cases, or even Punjab, which has reported more than 1,000 cases twice in the last three days. But the growth curves are certainly on the ascendant. In fact, all these states — Delhi, Haryana, Gujarat, Rajasthan and Madhya Pradesh — have had very similar growth trajectories in recent weeks. They show a steady decline till the first week of February, after which a turnaround has happened. Incidentally, this is not very different from the national trajectory as well. The coronavirus curve in India reached its lowest level in the second and third weeks of February, after which it has begun to rise. In the last two days, more than 18,000 cases have been detected across the country. The 18,711 cases discovered on Saturday was, in fact, the highest since January 1, when 19,079 cases were found. The rise in the other states is not very surprising. Travel restrictions have not been put in place, and people are freely moving from one place to another. In most states, passengers coming in from Maharashtra are not been mandatorily screened for the infection. What is being seen in these other states could therefore be a direct result of the rising numbers in Maharashtra. Of course, the resurgence in Maharashtra itself is not very well explained. None of the reasons attributed for the rise of cases in Maharashtra — people not using masks or following physical distancing norms, family functions, gram panchayat elections, reopening of local trains in Mumbai — is unique to the state. And yet, the numbers have not risen in Bihar or Uttar Pradesh, or even in West Bengal and Assam which are in the midst of a politically-surcharged election campaign, and are witnessing massive rallies on a daily basis.

Maharashtra had not reported more than 10,000 cases since the middle of October. In fact, the steady decline over the last few months had seen the numbers go down below 2,000 on a couple of occasions. Mumbai and Pune, two of the worst affected cities, had seen their daily numbers dip below 500. Now, Pune looks set to cross the 2000-mark in a couple of days. On Saturday, the district reported 1,925 cases. Pune has already regained the number two spot in the list of worst affected cities, having overtaken Bengaluru. Pune has so far recorded close to 4.2 lakh confirmed infections. Only Delhi, which has a caseload of more than 6.4 lakh, has more.

In relative terms, the resurgence in Punjab is as big as that in Maharashtra, though the absolute numbers are much lower. Punjab had begun to report less than 150 cases a day in the middle of January. But in the last three days, the daily numbers have twice been more than 1,000. On Saturday, 1,159 cases were discovered, which is the highest in five months. The only silver lining in this fresh wave is the fact that there is no evident rise in the death numbers, at least not yet. The trend in death numbers usually have a lag of about two to three weeks compared to that in the detection of new cases. But even after almost a month since the cases began to rise, there is no discernible increase in deaths. This number has been in two-digits or lower three-digits since the last week of January. On any given day, no deaths are being reported from between 18 to 20 states, sometimes even more. On Saturday, 100 deaths were reported from across the country. This could indicate that most of the new infections might only be mild in nature. But it might still be a little early to completely rule out an increase in deaths.