India coronavirus numbers explained: Just about 61,000 new cases were discovered across the country, the lowest in about six weeks. It was in the month of August that India had been reporting between 60,000 and 70,000 cases a day. India coronavirus cases: The new detection of coronavirus cases fell further on Monday, this time aided by the low-testing that happens on a Sunday. Just about 61,000 new cases were discovered across the country, the lowest in about six weeks. It was in the month of August that India had been reporting between 60,000 and 70,000 cases a day.

In fact, Maharashtra, the state with the highest caseload, reported just about 10,200 cases on Monday, its lowest since August 17. Andhra Pradesh had only about 4,200 cases, the lowest since July 20. Bihar reported less than 1,000 cases for the first time since July 11, while Delhi had less than 2,000 cases after almost a month. What is also remarkable was that this Sunday’s testing numbers were not significantly lower than on other days. Almost 9.9 lakh samples were tested on Sunday this time, while on each of the previous six days, about 11.7 lakh tests were carried out on an average. We have seen testing numbers fall much lower, to a level between seven and eight lakhs, on previous Sundays, and the Monday case count has been much higher than this.

In fact, the daily positivity ratio, or the ratio of number of positive results and number of tests on each day, was just 5.62 per cent on Monday. In other words, only 5.62 per cent of people who were tested on Monday turned out to be positive. This level of positivity has not been seen since May. But it must be said that this is misleading, mainly because the results of the PCR tests usually arrive a day or two later. That is why the impact of low testing on a Sunday is seen only the next day. 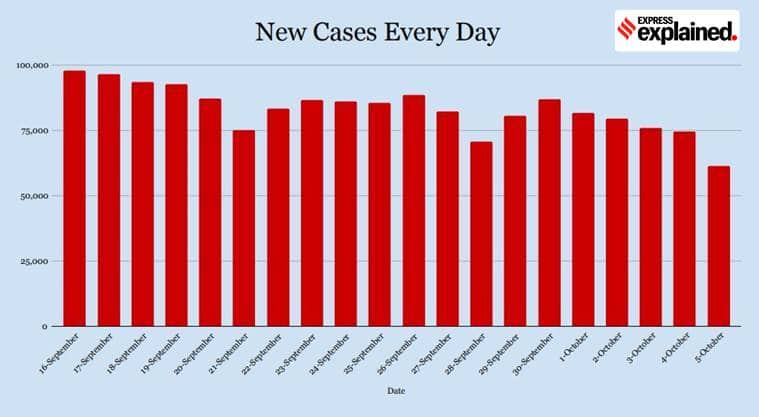 It is always better to look at the overall positivity rate, that is, the ratio of total number of positive cases and total number of tests conducted till now. This overall positivity rate has been falling since the second week of August, when it had reached a peak of about nine percent. But in the last few days, the reduction has been much more rapid.

The fall in positivity rate had begun on August 10, after reaching 9.01 per cent, and it had dropped to 8.44 per cent on last Sunday, that is September 27, undergoing a steady but a slow decline. In the week after that, however, it has quickly dropped to 8.25 per cent now.

Its been one month now since the last big surge in cases happened, and India first reported more than 90,000 cases in a day. Within the next few days, a level of 98,000 cases per day was touched, and it seemed only a matter of time before daily new detections crossed the one lakh mark. However, the daily numbers have remained surprisingly stable after that, dropping down in the 80,000s and even lower. During this time, the daily recoveries have gone on to exceed the detection of new cases, leading to a welcome fall in the active cases in the country.


In fact, in the last three weeks, the active cases have come down by almost one lakh, almost a ten per cent drop from a level of 10.17 lakh on September 17 to 9.19 lakh now. Of course, the 20,000 deaths in these three weeks have also contributed to the reduction in active cases. But such consistent and significant decline in active cases has never happened during this pandemic.

The total number of people who have so far been found to be infected with the virus has now reached 66.85 lakh, out of which 56,62 lakh, or about 85 per cent, have recovered from the disease.