India Coronavirus Cases Numbers: What is satisfying is that the growth rate in almost every state, including fast-growing ones like Andhra Pradesh, Karnataka and Kerala, has been dropping off in the last few days. India Coronavirus Cases: It might not be easily evident, but the daily growth rate of novel Coronavirus cases has once again been on the decline, even as the absolute number of new infections scaled new highs this past week. In the last ten days, the daily growth rate, averaged over 7-day periods, has come down from 3.67 per cent to 3.25 per cent. During this same period, the new detection of cases reached a high of over 57,000 before climbing down to a level of just over 52,000 now.

What is satisfying is that the growth rate in almost every state, including fast-growing ones like Andhra Pradesh, Karnataka and Kerala, has been dropping off (see charts below) in the last few days. Andhra Pradesh, which had touched almost a 10 per cent growth last week, has seen its growth rate slide down to 7.21 per cent. There has been an encouraging drop in the number of new cases reported by the state, from three consecutive days of 10,000-plus to below 8,000 now. 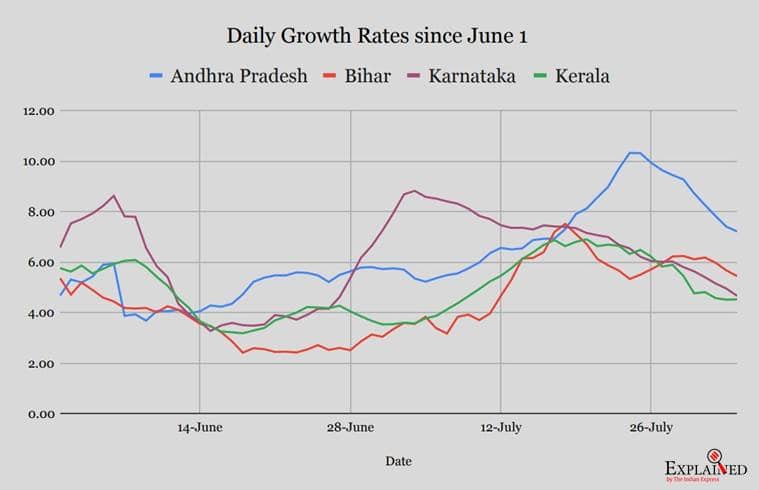 The decline in growth rates is not happening for the first time. Growth rates have been fluctuating periodically. In fact, it had been under a rather prolonged decline till the second week of last month, when it began to inch up slowly. However, the current 3.25 per cent growth rate of the total number of cases at the national level is the lowest since at least May 1. Consequently, the doubling time of cases, which is a function of the growth rate, has climbed up to more than 22 days. Except for brief periods, the doubling time has been more than 20 days since the middle of June. 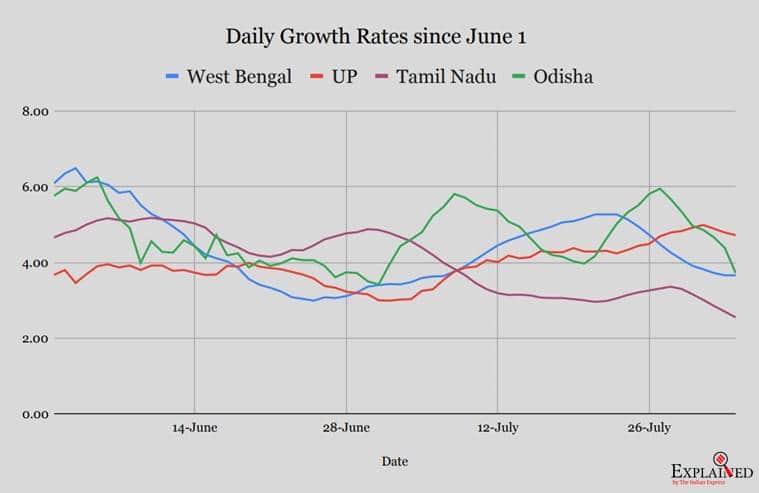 Delhi, which has a growth rate of less than one per cent, has a current doubling time of over 120 days.

The growth rate of active cases at the national level has also been declining. The active cases are currently growing at 2.39 per cent every day (averaged over 7-day period).

On Monday, Delhi fell further down in the list of states with highest caseloads, with Karnataka overtaking it in the fourth position. Delhi reported just about 800 cases on Monday, the lowest since May 27. It was the second successive day of less than 1,000 new cases in Delhi, again something that has not been achieved since the end of May.

Uttar Pradesh, in the meanwhile, moving swiftly towards the one-lakh figure. It reported more than 4,400 new cases on Monday, its highest so far, and now has over 97,000 people who have been infected with the virus. Uttar Pradesh would be the sixth state to have cross the one-lakh milestone, which is likely to be crossed on Tuesday itself. A little over 52,000 new cases were detected across the country on Monday, the lowest in the last six days. So far, 18.55 lakh people have been infected with the virus, out of which 12.30 lakh, or about 66.3 per cent, have already recovered from the disease. The death toll has reached almost 39,000, with over 800 deaths being reported on Monday, the highest so far.

Don’t miss from Explained | The new, quicker Covid-19 tests approved under the US RADx scheme