Rishi Sunak on Wednesday clinched his place for the final leg of the race to succeed Boris Johnson and will go head-to-head with Foreign Secretary Liz Truss as one of two finalists to take charge as Conservative Party leader and British prime minister. 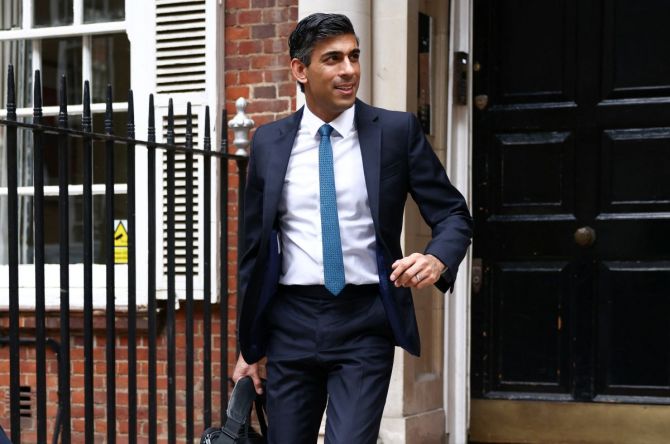 Sunak won the fifth and final voting round of Tory MPs with a resounding 137 votes, while second-placed Truss won the support of 113 MPs. Trade Minister Penny Mordaunt was knocked out of the race after coming in third with 105 votes.

The 42-year-old British Indian former chancellor of the exchequer, who has topped every voting round so far, added 19 votes to his Tuesday tally of 118 and comfortably crossed the 120 MPs mark seen as the threshold to confirm a place in the final showdown.

Sunak and Truss are now set for their first head-on clash in a live televised debate scheduled on the BBC for Monday.

“Cut taxes and deregulate wherever you can to make this the greatest place to live and invest, which it is.

“I love the treasury, but remember, that if we’d always listened to the treasury, we wouldn’t have built the M25 or the Channel Tunnel. Focus on the road ahead, but always remember to check the rear-view mirror.

“And remember — a bubble. It’s not Twitter that counts, it’s the people that sent us here.”

Johnson’s parting shot once again alluded to the thumping majority won by the Tories under his leadership in the 2019 general election, something he had referenced repeatedly in the days before ultimately resigning in the face of an unprecedented Cabinet revolt.

They were knocked off the race one by one for that shortlist to be whittled down to just two who will now face the estimated 160,000 Tory members eligible to cast votes for their choice of party leader.

Sunak’s popularity within the Conservative parliamentary party does not seem to chime with the views of the wider membership base, which has shown favour towards his leading opponents. The most recent YouGov survey of 725 Conservative Party members over Monday and Tuesday showed Truss would beat Sunak by 54 per cent to 35 per cent, and Mordaunt would also beat him 51 per cent to 37 per cent.

There is also some concern that Sunak’s prospect to replace Johnson could be hit by Conservative Campaign Headquarters’ decision to send out those ballot papers early next month before the bulk of the campaign hustings have been held.

The focus will now shift towards those hustings as both candidates campaign to woo the Tory voters to cast those ballots in their favour.