In a significant policy statement on the Taliban which is making big gains in its offensive in Afghanistan, China has asked it to make a ”clean break” from all terrorist forces, especially the Al Qaeda-backed Uyghur Muslim militant group ETIM fighting for the volatile Xinjiang province’s independence. 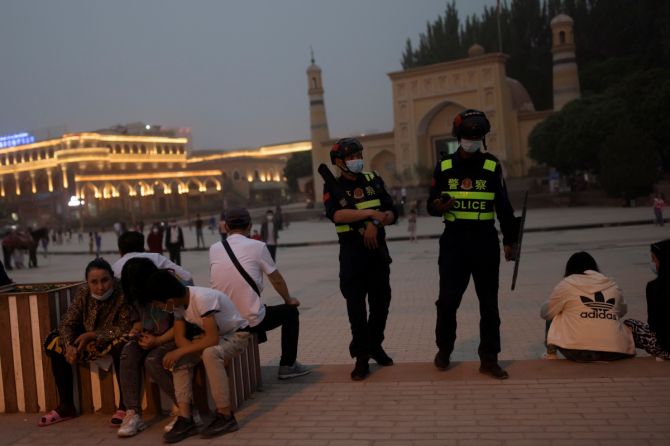 In his media briefing at Dushanbe, Chinese Foreign Minister Wang Yi stressed that further spread of the war in Afghanistan, especially an all-out civil war, should be avoided and pitched for restarting of intra-Afghan negotiations to realise political reconciliation and prevention of all kinds of terrorist forces from gaining ground in Afghanistan.

The Taliban, as a major military force in Afghanistan, should realise the responsibilities it bears for the nation, make a “clean break” with all terrorist forces and return to the mainstream of Afghan politics, Wang said on Tuesday.

He also praised the Afghanistan government — which often accuses Beijing’s ”all-weather ally” Pakistan of harbouring the Taliban militants — saying that the government headed by President Ashraf Ghani has done a lot of work for national unity, social stability and improvement of people’s livelihood, which should be justly evaluated.

Wang made the remarks during a joint press conference with Tajik Foreign Minister Sirojiddin Muhriddin following their talks in Dushanbe, official media in Beijing reported on Wednesday.

His comments came ahead of the foreign ministers of the Shanghai Cooperation Organisation (SCO) meeting in Dushanbe to be attended by Wang besides External Affairs Minister S Jaishankar and Pakistan Foreign Minister Shah Mahmood Qureshi.

Significantly, Afghanistan Foreign Minister Mohammad Hanif Atmar has been invited to take part in the SCO contact group which will meet soon after the foreign ministers meeting.

The eight-member SCO grouping consists of China, Russia, Kazakhstan, Kyrgyzstan, Tajikistan, Uzbekistan, India and Pakistan. Afghanistan is an observer of the SCO group.

Wang said that post the US troop withdrawal, China expects Afghanistan to establish a broadly inclusive political arrangement, pursue a solid Muslim policy, resolutely combat all terrorism and extremist ideologies, and be committed to friendly relations with all neighbouring countries.

Observers say Wang’s comments on the Taliban indicate that China is not buying the Taliban’s recent overtures stating that it considers Beijing as a “friend”.

China is concerned that hundreds of East Turkistan Islamic Movement (ETIM) fighters, reportedly grouping in Afghanistan, mostly Badakhshan province sharing a 90-km long border with Xinjiang through the narrow Wakhan corridor, will sneak into Xinjiang or through the Pakistan-occupied Kashmir and the Central Asia states.

The ETIM is trying to carry out an insurgency in Uyghur Muslim-dominated Xinjiang province. Xinjiang also shares borders with PoK and Tajikistan.

China’s massive crackdown in Xinjiang, observers say, has exasperated the resentment among native Uyghur Muslims in the province and prompted the US, the EU and international human rights organisations to accuse Beijing of committing genocide.

Also, the 12th report of the Analytical Support and Sanctions Monitoring Team of the United Nations last month confirmed the presence of ETIM militants in Afghanistan.

Amidst the Taliban gains, China evacuated 210 of its nationals from Afghanistan last week.

Playing down China’s concerns, Taliban spokesman Suhail Shaheen said his group sees China as a ”friend” of Afghanistan and is hoping to talk to Beijing about investing in reconstruction work ”as soon as possible”.

Shaheen also said that the Taliban would no longer allow China’s Uyghur separatist fighters from Xinjiang, some of whom had previously sought refuge in Afghanistan, to enter the country.

The Taliban would also prevent al-Qaeda or any other terrorist group from operating there, he said.

”We have been to China many times and we have good relations with them,” Shaheen told Hong Kong-based South China Morning Post on July 10, recalling the meetings hosted by China in the past.

”China is a friendly country that we welcome for reconstruction and developing Afghanistan,” he said, adding that “If (the Chinese) have investments, of course, we ensure their safety”.

Commenting on the Taliban’s overtures to Beijing, Andrew Small, a senior transatlantic fellow with the German Marsh Fund said: ”Whatever benign language the Taliban use, China remains highly concerned about the security situation there.”

He said that China’s biggest concern in its dealings with the Taliban had always been whether it was sheltering Uyghur separatists and whatever benign language the Taliban use, China remains highly concerned about the security situation there.

In his media briefing at Dushanbe, Wang stressed that further spread of the war in Afghanistan, especially an all-out civil war, should be avoided and pitched for restarting of intra-Afghan negotiations to realise political reconciliation and prevention of all kinds of terrorist forces from gaining ground in Afghanistan.

Afghanistan is an independent and sovereign country and history shows that any coercive intervention in Afghanistan is bound to fail, he said, indicating China’s unwillingness to commit its military to the war-torn country to fill in the void left by the US and NATO troops.

Considering the security risks, China is goading Pakistan, which shares close ties with the Taliban, to help stabilise Afghanistan amidst the Taliban offensive.

It is yet to be seen how Wang’s praise of the Afghan government for doing good work will be received in Pakistan as it shares frosty ties with the Ashraf Ghani government over its allegation of harbouring the Taliban militants.

Early this month, Wang who has stepped up trilateral diplomacy with Pakistan and Afghanistan persuading them to resolve their differences, asked Islamabad to step up cooperation to contain security risks in Afghanistan in the light of the latest offensive by the Taliban following the withdrawal of the US.

“(China and Pakistan) need to defend regional peace together. Problems in Afghanistan are practical challenges that China and Pakistan both face,” especially the expansion of both international and regional terrorism, Wang said on July 8 while addressing a meeting of the 70th anniversary of diplomatic relations with Pakistan in Beijing.