‘Before entering Tihar jail, she told us not to worry and that we will together come out of this crisis soon.’ 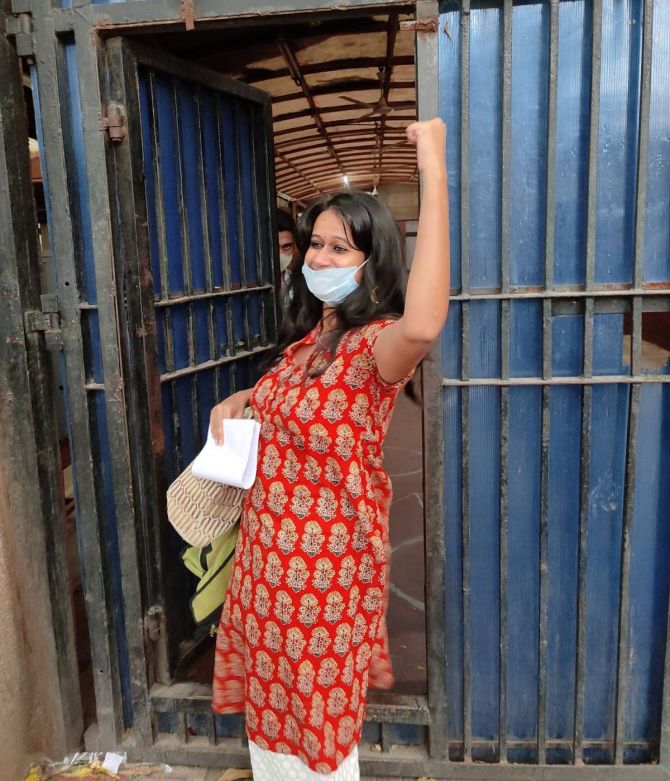 The Delhi high court had granted Natasha interim bail to attend her father’s funeral. Mahavir Narwal died of COVID-19 at a Rohtak hospital on May 9.

Natasha was arrested in May 2020 along with fellow Pinjra Tod activist Devangana Kalita and booked under the stringent Unlawful Activities Prevention Act in connection with the Delhi riots.

Jagmati Sangwan, a family friend of the Narwals, speaking to Syed Firdaus Ashraf/Rediff.com says she spent time with Natasha during these three weeks and that the student-activist was now going to focus on human rights issues and also dedicate her time in prison teaching the children of women convicts.

Natasha spent most of the three weeks she had been granted bail in meeting her relatives and friends; many turned up to pay their condolences for her father’s death and she was happy to see that so many people had turned up to meet her.

Meeting these people helped her in bringing some semblance of normalcy. Her father’s death has caused her immense pain and when she received the news of his demise, she was devastated.

A lot of her time went in running from bank to bank and settle the documentation work that is needed to be done before May 30. She hadn’t met her father before his demise and therefore, had no idea which bank account he was operating or where he kept his papers and documents.

Her brother Aakash has just recovered from coronavirus and is too weak to move around, leading to Natasha having to take on the responsibility of the documentation and bank work.

During her incarceration she wasn’t allowed to register for the semester at JNU (Jawaharlal Nehru University). This matter too is being heard in the court and during her bail-granted time she also attended court in this matter.

In regards to her incarceration owing to her participating in the anti-Citizenship (Amendment) Act protest, we were expecting that she would be granted regular bail before May 30.

However, on April 27, her regular bail application judgment was put on hold. The hearing had concluded, but the judge refused to pass his verdict. Generally, this is not the practice as judges don’t keep bail decisions pending.

We felt that by May 27 that the judge would give the verdict, but till date no verdict has come and therefore, she had to go back to jail after completing her three weeks of bail time.

Before going to jail, Natasha told me that she is now going to concentrate more on yoga and human rights issues in jail. She is very concerned about the numerous women convicts who are in jail with their children.

The children don’t have proper means to education and don’t get enough love and care in jail. She has vowed she will devote more time to them and teach them.

Before entering Tihar jail, she told me that the State can do whatever it wants, but she will not hesitate to raise her voice against wrongs.

In her opinion, the State tried to break her down by objecting to her bail application so that she could not meet her dying father, but she will not give up and raise her voice against the government’s unconstitutional moves.

In her opinion, the Citizenship (Amendment) Act is unconstitutional and she is within her rights to speak against it. The State cannot suppress her voice just because it does not like her views.

She feels that every citizen of India must have the right to raise their voice if the State is doing something wrong.

The attack on the students made her realise that the right to resist and the right to protest is a fundamental right in democracy.

Natasha feels the soul of Indian democracy is dying and the government could have saved it by talking to the students, but they refused and instead took a high-handed attitude by beating up the students.

Before entering the jail, she told us not to worry and that we will together come out of this crisis soon.

She raised her fist to give a message of never losing hope in the struggle.

We all got emotional and she too was emotional, but then she is Natasha and she composed herself well before entering the jail. 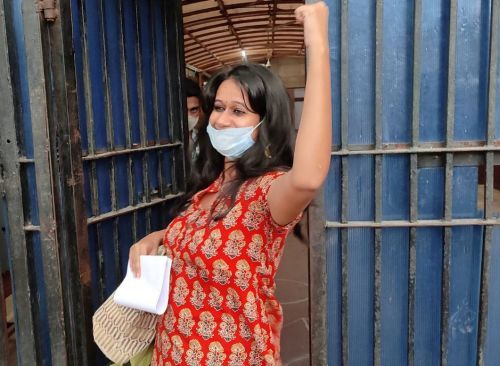