Underlines reforms, upgrade in border infrastructure from Ladakh to Arunachal India must enhance its military capabilities in tune with changes in the world and the modes of war, Prime Minister Narendra Modi said Thursday, addressing soldiers on Diwali at the Nowshera sector in the border district of Rajouri in Jammu and Kashmir.

This was the Prime Minister’s second Diwali with the troops in Rajouri district — in 2019, he had celebrated the festival of lights with them at Rajouri Army Division Headquarters. On Diwali day in 2020, he was with soldiers and Border Security Force (BSF) jawans in Rajasthan’s Jaisalmer.

Unlike in the past when wars were fought on horses and elephants and it took years for the methods to change, today’s technology means that if there is one method of war in the morning, it could be another in the evening, Modi said. That’s why it calls for coordination through combined leadership, an imperative that was met, he said, by the appointment of the Chief of Defence Staff and setting up of the Department of Military Affairs. Also to this effect, he said, there was a thrust on border infrastructure: roads, tunnels and optical fibres laid right from Ladakh to Arunachal Pradesh and Jaisalmer to Andaman & Nicobar Islands.

Modi said the government’s efforts have boosted indigenous capabilities in defence, a sector where the country had to depend mostly on imports.

He hailed the courage of soldiers and said their capability and strength has ensured peace and security for the country. “I want to spend Diwali with family members, so I join you on this festival,” he said. 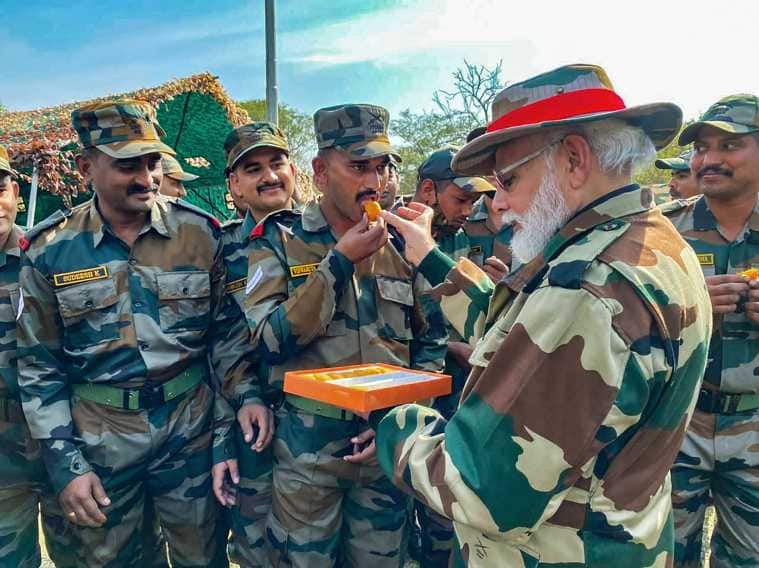 The PM applauded the role played by the brigade here in the surgical strikes. India had conducted a surgical strike on September 29, 2016, across the Line of Control as a response to a terrorist attack on an Army base in the Uri sector. Modi said many attempts were made after the surgical strike by terrorists but they were effectively foiled.

The PM’s visit to troops in Nowshera comes when, despite a ceasefire along the Line of Control since last year, there has been a spurt in attempts by Pakistan-based militants to infiltrate into Jammu and Kashmir.

For more than three weeks now, security personnel have been engaged in operations against militants in the forests between Dehra Ki Gali and Bhati Dhar in adjoining Poonch district.

The Army has lost nine soldiers including two JCOs. A jailed militant, who was taken by police to lead them to the militant hideout, has been killed.

Referring to Nowshera, Modi said: “When I touched its soil, I had a different feeling and my heart got filled with excitement…Its (Nowshera) history speaks of the valour of Indian army.”

“In every war, proxy war, and conspiracy, Nowshera has given a befitting reply and acted as guardian of Srinagar and Kashmir,’’ he said, paying tributes to the heroes of Nowshera, Brigadier Mohammad Usman, Naik Jadunath Singh and Lt R R Rane.