Around 50 km away, outside the Bengaon branch of the bank, there are rows of bank passbooks on the ground as villagers squat alongside. Further away, in Thuamul Rampur block, the crowd outside the Utkal Grameen Bank started swelling from 6.30 am, four hours before opening. 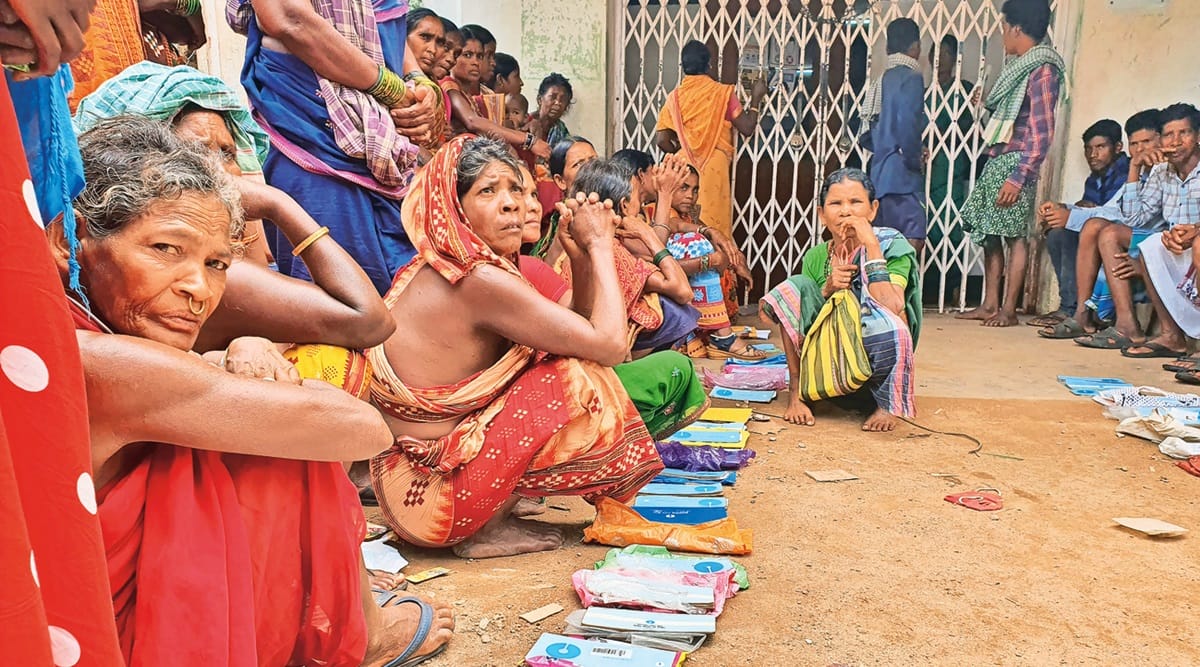 Tilotama Majhi stands in a long queue outside the Musanal branch of State Bank of India, cradling her infant son. This is her second visit to the bank in three days and she still doesn’t know if she can withdraw the Rs 1,000 that desperately needs for her mother’s medicines. She has been waiting six hours and the bank server is down — for the fourth day in a row.

Around 50 km away, outside the Bengaon branch of the bank, there are rows of bank passbooks on the ground as villagers squat alongside. Further away, in Thuamul Rampur block, the crowd outside the Utkal Grameen Bank started swelling from 6.30 am, four hours before opening.

Across blocks in Kalahandi, one of the six Odisha districts affected by Left Wing Extremism, patchy internet, erratic electricity supply and poor banking penetration have made digital transactions a tedious, long-drawn affair for villagers, often involving multiple failed visits and resulting in forfeited earnings. In these areas, each bank branch often caters to nearly 200 villages.

In a recent meeting with Home Minister Amit Shah, Chief Minister Naveen Patnaik had asked the Centre to improve banking facilities in LWE-affected areas, saying banking correspondents “cannot be a replacement for banks in these areas”.

As she breastfeeds her infant, Tilotama says, “My MGNREGA wages come to this bank. I need the money for my mother’s medicines. My son is young and needs to be fed, so I cannot leave him at home.” This morning, Tilotama, along with six other women, left home at 5 am and travelled 9 km on foot from their village Sindhibahali, under Bhatangpadar gram panchayat in Lanjigarh block of the district.

Lanjigrah and Thuamul Rampur blocks in Kalahandi are among the worst affected by Maoism. Lanjigarh block, with 197 revenue villages and a population of nearly 48,000, has five banks and seven customer service points. Thuamul Rampur block, with 298 villages and a population of 77,840, has two banks and 10 customer service points.

Around 50 km from the Musanal branch is SBI’s Bengaon branch where villagers have been waiting for hours. With a single BSNL mobile tower catering to villages in a 15-km radius, the signal is usually very weak and the bank server routinely breaks down. Villagers claim to have spent nights outside the banks, waiting for the server to be restored. Today is no different.

“To withdraw money, we end up losing a day’s wages, sometimes two,” says Krushna Bhakta, 59, who has travelled 20 km from his Parapadar village.

An official at the Bengaon branch says, “Unless there is better connectivity, there is nothing we can do. Electricity is another issue — sometimes there is no power for days together.”

With money from welfare schemes being credited to bank accounts of beneficiaries, over the last few years, more people have been turning up at banks, but digital infrastructure has not kept pace. Admitting that lack of connectivity is a major hurdle in the banking system, Dhruba Singh, Lead District Manager of Kalahandi, who coordinates between banks and the government, says, “… To make the banking system more accessible, we have started setting up Customer Service Points (CST). The idea is to have a CST in each gram panchayat. But even for these points, connectivity is a must. Work is also underway on Bharat Broadband Network (BBNL)…”