Bibek Debroy writes: There’s been an excessive focus on the Union government. The availability of data from state legislatures is an opportunity to monitor them better 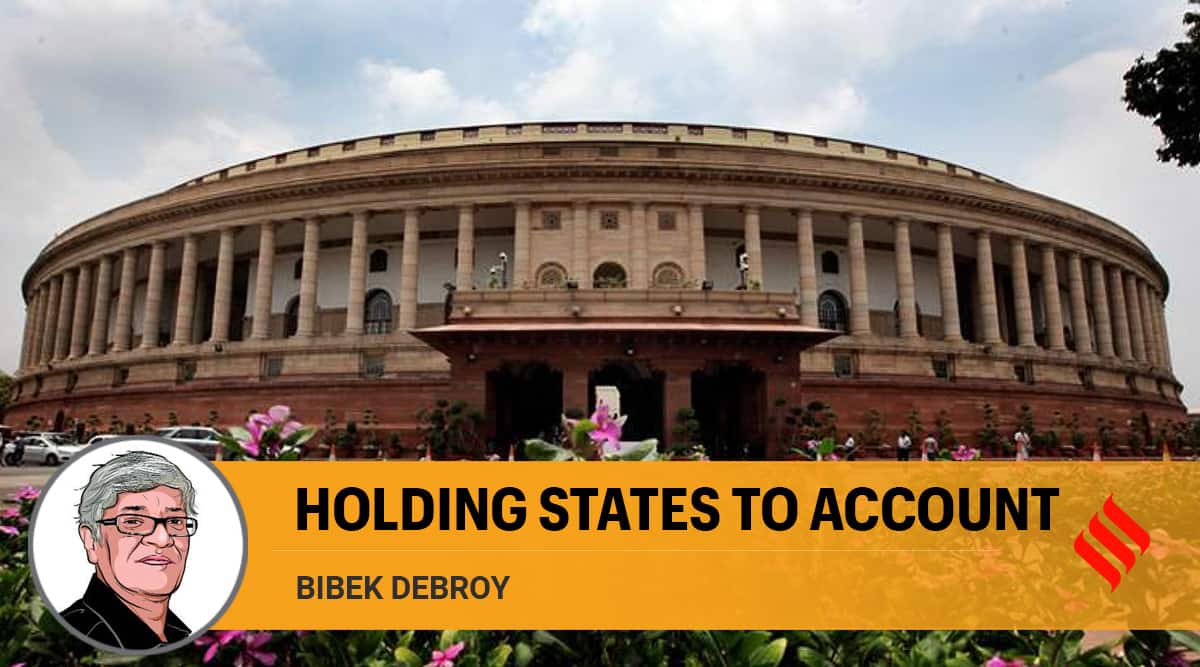 The Constitution has a Seventh Schedule, with separate lists for the Union and state governments, and a concurrent list. Compared to the public attention devoted to the executive arm, relatively limited attention is paid to the legislature and judiciary. As citizens, we should be concerned with the productivity of legislatures too. Today, if we have metrics and information to gauge the efficiency of Lok Sabha and Rajya Sabha, a large part of the credit goes to PRS Legislative Research. In discussions on reforms, or debates about public expenditure, there is an excessive focus on the Union government, reflecting perhaps our mindset that there is a “Centre”, though constitutionally, there is no “Centre”. There is the Union government. Witness the interest in Union Finance Commission recommendations and the amnesia about State Finance Commissions and their recommendations. Alternatively, there is limited scrutiny of state-level expenditure, or fiscal devolution and decentralisation of decision-making within states, or tracking functioning of state legislatures. (There are of course reports on the state of state finances.) Most factor markets we seek to reform are on the concurrent list or the state list. Now that PRS has ventured into monitoring state legislatures, we will probably start to have better information, with a caveat.

“This report focuses on the legislative work performed by states in the calendar year 2020. It is based on data compiled from state legislature websites and state gazettes. It covers 19 state legislatures, including the Union territory of Delhi, which together account for 90 per cent of the population of the country. Information and data on state legislatures is not easily available. While some state legislatures publish data on a regular basis, many do not have a systematic way of reporting legislative proceedings and business.” The report in question, just published (June 2021), is an annual review of state laws, for 2020. Notice the bit about information and data not being available. Typically, information becomes available when countervailing pressure is generated. Reports like this help to do that. If we cast our minds back, it was no different with the Lok Sabha and Rajya Sabha once upon a time.

In passing, what is a state legislature? Most states are unicameral, with legislative assemblies. Some (Andhra Pradesh, Bihar, Karnataka, Maharashtra, Telangana, UP) have a legislative council. There are historical and colonial reasons behind legislative councils. Since then, most states have scrapped legislative councils with valid reason. They delayed the passing of legislation and required additional expenditure, funded indirectly by citizens. Unless one wants to accommodate individuals who lost in assembly elections, or did not wish to stand, there is no need for a legislative council. That debate assumes an added significance because West Bengal abolished its legislative council in 1969, but the newly-elected government wants to bring it back. In principle, a similar argument exists about the Rajya Sabha, especially with the domicile requirement removed. But there is a Supreme Court judgment (Kuldip Nayar versus Union of India and others, 2006) on that.

To return to PRS, the annual review has not been done in the best of times. After all, 2020 saw the first wave of the pandemic, though, in principle, meetings can also be virtual. As a benchmark, the Parliament met for 33 days in 2020. Pre-2020, these 19 states met for an average of 29 days a year. In 2020, they met for an average of 18 days. Before the pandemic, 29 days in a year? Had it not been for this report, I would have expected the number to be much higher. There is, of course, a difference between a Bill being passed by a state legislature and it becoming an Act, with the assent of the governor, and time-lags in that process. When they met in 2020, what did state legislatures do? “States passed an average of 22 Bills (excluding Appropriation Bills). Karnataka passed 61 Bills, the highest in the country. The lowest was Delhi which passed one Bill, followed by West Bengal and Kerala, which passed two and three Bills respectively.”

The pandemic certainly affected productivity. But the following problem is probably systemic and has nothing to do with Covid. “State legislatures pass most Bills without detailed scrutiny. In 2020, 59 per cent of the Bills were passed on the same day that they were introduced in the legislature. A further 14 per cent were passed within a day of being introduced… In Parliament, Bills are often referred to Parliamentary Standing Committees for detailed examination. …In most states, such committees are non-existent. In the absence of a robust committee system and fewer working days, state legislatures barely spend any time scrutinising legislative proposals brought before them.”

What subjects featured in state legislation? As expected — agriculture, land, labour, law and order, trade, commerce and industry. I will skip those details. But since this was in the middle of the epidemic, there was also legislation linked to the Epidemic Diseases Act of 1897 and the Disaster Management Act of 2005. Given the pandemic, I found a nugget interesting. “In 2020, several states decided to reduce the salaries and allowances of their respective MLAs, MLCs, Ministers, Speakers, and Whips. …While the states of Gujarat, Himachal Pradesh, Karnataka, Kerala, and Uttar Pradesh decided to reduce the emoluments by 30 per cent, the Bihar government amended the Rules (that provide for salaries and allowances) to reduce salaries by 15 per cent. Several other states such as Andhra Pradesh, Odisha, and Telangana issued orders deferring the salaries of their MLAs, MLCs, and Ministers.” The nugget is interesting because several states did no such thing.

This column first appeared in the print edition on June 10, 2021 under the title ‘Holding states to account’. The writer is chairman, Economic Advisory Council to the PM. Views are personal.