Exit polls have shown major gains for YSRCP in Andhra Pradesh in both Assembly and Lok Sabha elections. In Telangana, the exit polls predicted that the TRS will continue to be the dominant party. 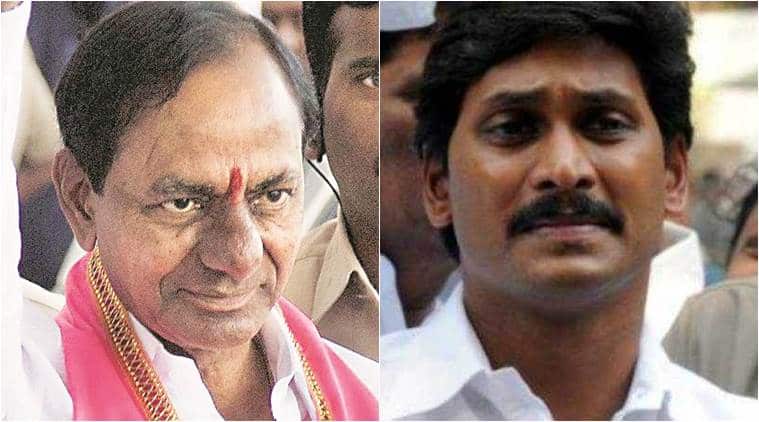 More than 20 Opposition parties that met on Tuesday to discuss alleged EVM irregularities also resolved to come together to keep the NDA out of power. Sources said that while most of these parties were in touch throughout the five NDA years as part of the Opposition grouping, serious efforts are now being made to induct Telangana CM K Chandrashekar Rao’s Telangana Rashtra Samithi (TRS) and Jagan Mohan Reddy’s YSR Congress Party (YSRCP) into this block.

Neither of the two parties had been warm about being part of a grouping that includes the Congress. However, in discussions since the conclusion of the polls, one of the options of bringing them in, according to sources, is an offer of a high office for KCR — if the numbers permit. KCR has been making noises that the TRS and YSRCP would move as a block, and also reviving talk of a federal front.

“What if there is an offer of deputy prime ministership on the table, provided the situation permits,” asked a senior Opposition leader who did not want to be named.

One of the prime movers of the Opposition talks has been Andhra Pradesh Chief Minister N Chandrababu Naidu of the TDP. In the last few days, KCR met DMK chief Stalin in Chennai, Karnataka CM H D Kumaraswamy (JDS) and Kerala CM Pinarayi Vijayan (CPM), reportedly in a bid to rekindle hopes of a non-Congress, non-BJP federal front. Kumaraswamy heads a coalition government with the Congress, and Stalin reportedly reiterated DMK’s commitment to an alliance with the Congress while inviting KCR to be part of the grouping.

Sources said both YSRCP and TRS have been in touch with Opposition parties since the results. The BJP, on its part, has been banking on the two parties to boost NDA numbers, particularly if the mandate is not as decisive as many of the exit polls have forecast.

In the outgoing Lok Sabha, the TRS has 10 members and the YSRCP four. There are 20 Lok Sabha seats in Andhra Pradesh and 15 in Telangana.

Exit polls have shown major gains for YSRCP in Andhra Pradesh in both Assembly and Lok Sabha elections. In Telangana, the exit polls predicted that the TRS will continue to be the dominant party.

An Opposition leader said: “None of us believes the exit poll figures. The mood was upbeat in today’s meeting. Now that the polls is over, there is great rapport between the parties. We understand the need to move fast. Part of that is to reach out to the Andhra-Telangana parties before the BJP does. The other part is to move fast after the results. Party leaders are constantly in touch and most of us will be back in Delhi on the evening of May 23. Staking claim swiftly will be the key.”