An official from the State Emergency Operations Centre (SEOC) told indianexpress.com that North Tripura, Unakoti and Dhalai districts are worst affected by the rainfall. 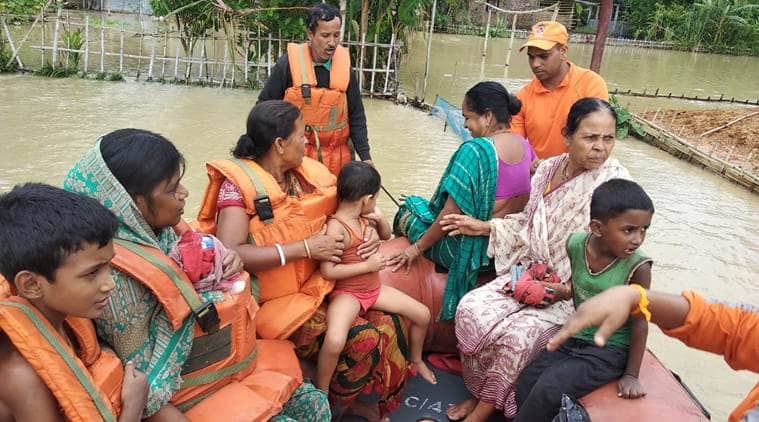 Thunderstorms and heavy showers have left at least 739 people stranded in relief camps in Tripura amid flood situation in the past 24 hours.

An official from the State Emergency Operations Centre (SEOC) told indianexpress.com that North Tripura, Unakoti and Dhalai districts are worst affected by the rainfall. Forty rescue boats were deployed by the state revenue department to evacuate those struck inside their homes in submerged places. Apart from these, a contingent of National Disaster Response Force (NDRF) and Tripura State Rifles (TSR) have also joined rescue operations.

The latest situation report from SEOC informed this evening that at least 739 people were stranded across all eight districts of Tripura due to thunderstorms and flood situation. Among them, 358 were rendered homeless in Unakoti district and 381 in North Tripura.

A total of 1039 houses were damaged by uprooted trees, dislodged poles and gusty winds. The highest damage to dwelling units was reported from Dhalai district.

Meanwhile, water level of River Manu in Unakoti district crossed extreme danger level this afternoon. Water level in River Kakti and River Juri of North Tripura district came close to danger level. However, officials have confirmed that water is receding from all three rivers as the showers have slowed down.

As situation keeps developing, one relief camp opened at Deocherra in Panisagar of North Tripura was closed on Saturday.

The local Meteorological Department has said the weather condition is not over yet and has issued gusty wind and thunderstorm warnings. A Met official informed that thunderstorm accompanied with gusty wind reaching 30-40 Km per hour speed and lightning is likely to occur at isolated places over all districts of Tripura in the next 24 hours.

Earlier this month, 382 houses were damaged during gusty winds and thunderstorms as the ‘Kaalboisakhi’ or seasonal Norwesters hit the state. Tripura also sustained extensive damage last year due to heavy downpour and thunderstorm last year as over 40 thousand people were forced to take shelter in relief camps due to floods.

The flood conditions were triggered since water level in River Howrah, Khowai, Gomati and Katakhal canal exceeded safety limits. The state government later announced to construct a series of small dams on Baramura Range to control unchecked rainwater flow into rivers in the plains, which, in turn, inundated large tracts of land in 2018.