No time for blame game, fight pandemic based on science and truth; need to be prepared for a third wave: Bhagwat. 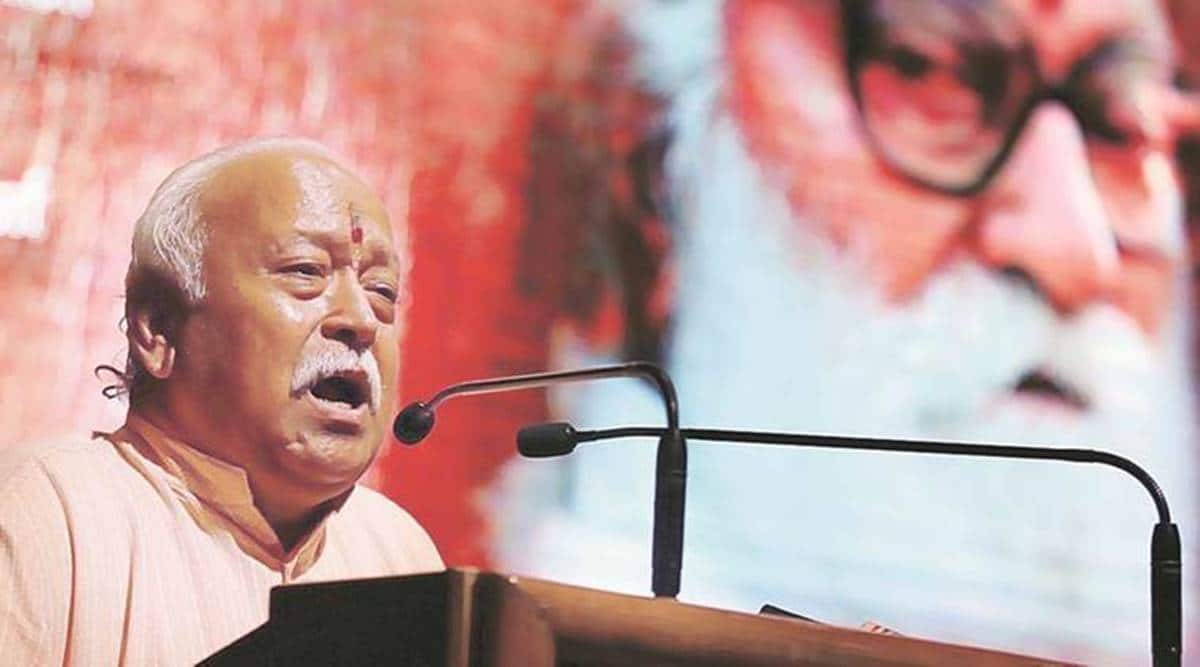 DESPITE its knowledge and warning signs, the Government, the administration, and the public, all lowered their guard after the first Covid wave and this led to the current crisis, RSS chief Mohan Bhagwat said Saturday.

Underlining that science and truth are the “foundation” for a strategy to tackle the second wave, Bhagwat cautioned against use of Ayurvedic medicines or spreading misinformation without any scientific examination.

Launched by the Sangh’s Covid Response Team for instilling “positive thoughts” among people during the pandemic, the series has earlier featured Azim Premji and Sri Sri Ravishankar, among others.

Bhagwat said the country had to be prepared for a possible third wave. “Should we be scared? If it comes, then we have to be prepared like the rock against which waves crash, only to recede into the ocean.”

In an apparent reference to Premji’s address, Bhagwat said people had offered great advice in the lecture series before him. “They have spoken about determination, advised speeding up of efforts and making those efforts on the basis of science and acceptance of the truth. Even I wish to say the same things,” he said.

Premji had said: “We must act with the greatest of speed on all fronts and these actions must be based on good science… At the core of the idea of good science is the matter of being willing to accept and confront the truth. So we must confront this crisis, its scale, its spread and its depth truthfully. Science and truth are the foundation on which we can tackle this crisis and ensure that it is not repeated.”

Bhagwat said this was not the time for blame game but to unite and fight the pandemic. “India has to unite right now, not weigh in faults and good deeds. There will be ample time for that. Azim Premji spoke about increasing the speed of our efforts. How will this speed be achieved? When all the people work together as a team. It doesn’t matter that we have woken up late. On the strength of unity we can move forward with speed, covering all backlog,” Bhagwat said.

The RSS chief told people to stay prepared for the fact that the economy is going to slow down further. He suggested skill enhancement training and urged people to buy earthen pots instead of a fridge.

Bhagwat advised people to keep themselves fit, be patient, and take necessary precautions. Emphasising on yoga and balanced food to build immunity, he, however, cautioned against adopting all information available on the Internet at face value.

“We have to receive it on the basis of science. What is science? To accept anything after proper examination. Just because someone is saying, so it should be taken, is not right… Hamari taraf se besir-pair ki koi baat samaaj mein na jaaye (We should ensure that for our part, we do not disseminate any illogical information). Nor should we become victims of such information,” he said.

Speaking on Ayurveda, Bhagwat said, “Ayurveda is proven science. There is a tradition behind it and it backed by reasoning. But so many things are said in the name of Ayurveda. Someone may benefit by something at a personal level, but it may not be applicable to all. It can’t be until it is tested against prolonged experience and scientific tests. So it is important to be cautious about using such remedies.”

Bhagwat said that keeping one’s spirits up during these trying times made a difference. “Are we going to feel bitter because of the news of people dying around us and listening to news about situation being serious? If we do that, we will be destroyed.”

The RSS chief urged people not to hesitate seeking medical help if they have symptoms. “Some people do not reveal their infection for fear of social stigma. They are scared of getting admitted in hospital… Timely treatment can save lives,” Bhagwat said.