RNG awards: President Kovind also said in amid the “din of breaking news” syndrome, the fundamental principle of restraint and responsibility had been undermined substantially. 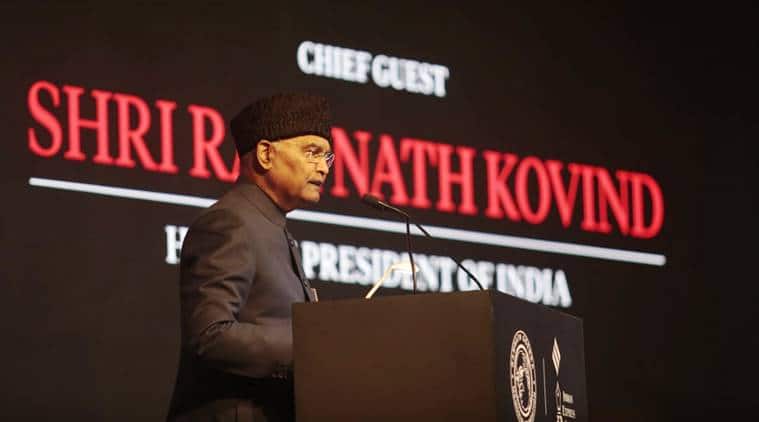 President Ram Nath Kovind, who was the chief guest at the Ramnath Goenka Excellence in Journalism Awards held in New Delhi on Monday, said journalism needs to reclaim its values of honesty and fairness if it wanted to stay relevant.

“If journalism has to remain relevant, it has to retain its sense of mission, it has to reclaim its values of honesty and fairness. It has to, 24 by 7, reinforce its compact with citizens: that it will not bend, that it will always fight for truth no matter what the consequence, and that it will remain committed to finding the truth without fear or favour,” the President said.

President Kovind also said in amid the “din of breaking news” syndrome, the fundamental principle of restraint and responsibility had been undermined substantially. “Fake news has emerged a new menace, whose purveyors proclaim themselves as journalists and taint this noble profession,” he said.

“A section of the media has then taken recourse to entertainment in the name of news. Stories exposing great social and economic inequalities are ignored, and their place is taken by trivia. Instead of helping promote scientific temper, some run after irrational practices in their search for eyeballs and ratings. But, I am confident that, quality journalism will prevail in the long run – the kind of journalism we have gathered to celebrate today,” the President further said. Remembering the founder of the Indian Express group, Ramnath Goenka, President Kovind said that he wondered what he would have done to encounter the crisis of credibility on account of paid or fake news.

“He would never have allowed the situation to go adrift and initiated measures for course correction for the whole media fraternity. There is no doubt that journalism has been passing through a critical phase,” President Kovind said.

Viveck Goenka, Chairman of the Indian Express Group, during the opening address at the event, said that award ceremony was a testament to the fact that good journalism was still alive. He said that as many as 922 entries were received by the jury.

“We are here to applaud the finest in journalism. Learning is the heart of good journalism too. This evening is a testament to the fact that good journalism is all alive. This year we had a record of 922 entries,” Goenka said.

Meanwhile, Raj Kamal Jha, Chief Editor of The Indian Express, spoke on the recent controversy over Pakistan poet Faiz Ahmed Faiz’s poem Hum Dekhenge. “In the recent Tu tu main main main over Faiz’s Hum Dekhenge on TV, a telling line slipped away – the one in which he links main and tum,” he said.

“Good journalism listens to both the main and the tum, it defines no cut-off date, asks for no ID proof,” Jha said.

From stories told from jungles deep inside Bastar that often get lost in the State vs Maoists binary to those that tracked rising instances of sexual assault on minors; from some of the biggest newsbreaks of the year to investigations that highlighted gaps between claims and numbers — these are some of the works from the year 2018 that were rewarded at the award.

For all the latest India News, download Indian Express App