Punjab Chief Minister Amarinder Singh on Tuesday sent and SOS to Prime Minister Narendra Modi and Union Home Minister Amit Shah stating that the number of people on oxygen support (including those on ventilators) in Punjab has reached to 10,000. 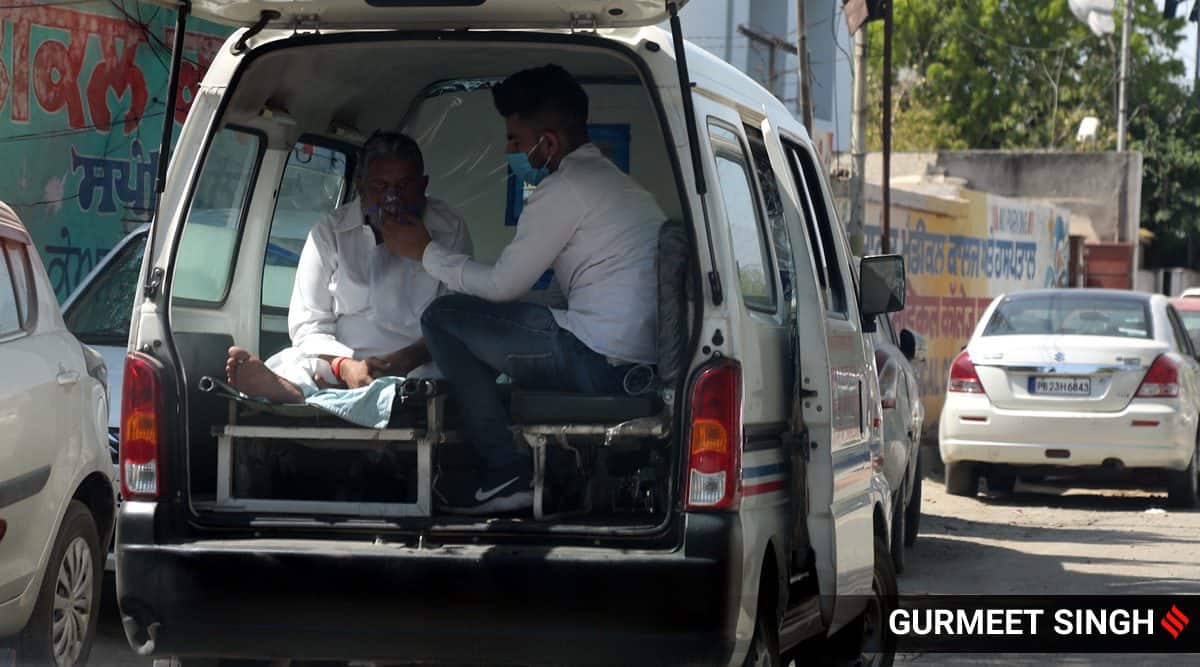 In just three days from May 1 to May 3, patients on oxygen support in Punjab have swelled by over 12 times. While there were 644 Covid patients on oxygen support on May 1, the figure of such patients rose to 7,845 on May 3, data from the state’s Covid media bulletin revealed. The government, however, said that while there was indeed a rise, the exponential rise (1,118 per cent) in Level 2 patients as indicated in the Covid bulletin is on account of ‘data mismatch’.

Meanwhile, Punjab Chief Minister Amarinder Singh on Tuesday sent and SOS to Prime Minister Narendra Modi and Union Home Minister Amit Shah stating that the number of people on oxygen support (including those on ventilators) in Punjab has reached to 10,000.

Dr Rajesh Bhaskar, state nodal officer for Covid -19, agreed that as on May 3, there were 7,845 patients on oxygen support in the state.

“But the number has not risen exponentially. The data was compiled only on May 2 when we got the details of patients on oxygen support from all 22 districts. There has been an increase, but this exponential rise, as shown in the Covid bulletin, is on account of data mismatch,” he said.

A functionary of the health department on anonymity also said there has been a rise in number of patients on oxygen support but not exponentially. “The cases are certainly rising but there has been a data mismatch,” he said.

The government has been sending SOS calls to the Centre, as the districts are reporting shortage of oxygen.

Punjab Chief Minister Amarinder Singh on Tuesday sought the immediate intervention of both the Prime Minister and the Union Home Minister, to ensure uninterrupted supply of medical oxygen to the state, along with additional allocation of 50 MT LMO from a nearby source and 20 additional tankers (preferably conducive to rail travel) for timely evacuation of LMO from Bokaro.

The Chief Minister sent out separate letters to Prime Minister Narendra Modi and Home Minister Amit Shah, as the number of Covid patients on varying levels of oxygen support in the state went up to 10,000.

Expressing deep concern over the threat of loss of lives due to oxygen shortage across the state, the Chief Minister said with mounting caseload, he was unable to increase Level 2 and Level 3 beds due to oxygen availability constraints.

The state was facing the prospect of shortage of oxygen beds, he said, pointing out that the Centre had expressed its inability to even allow Punjab’s local industry to undertake commercial import of LMO from Pakistan through the Wagah-Attari border, which is geographically proximate.

Further, despite assurance that “adequate supply would be ensured to us from alternate sources, I regret to point out that this has not happened,” said Amarinder.

The total allocation of LMO from outside the state is currently 195 MT, of which 90 MT is from Bokaro in eastern India. The balance 105 MT comes from LMO facilities in Haryana, Himachal Pradesh and Uttarakhand. However, Punjab is not getting its daily allocated quota, said the Chief Minister. The existing backlog for Punjab from these LMO facilities is 5.6 MT from Panipat (Haryana), 100 MT from Dehradun (Uttarakhand) and 10 MT from Roorkee, he added.

Pointing out that Punjab had now been given to understand by the Centre that there would be likely disruption of LMO supply from from Panipat and Barotiwala, the Chief Minister said this would cause great stress on the already limited oxygen availability in the state, thus causing a medical emergency, including risk of loss of life for the large number of patients who are in critical condition and on regular oxygen support. The disruption should be avoided, he said, adding that, if necessary, the state must be compensated immediately from a nearby additional source.

Referring to the shortage of tankers, the Chief Minister said the state was airlifting two empty tankers daily to Ranchi, with the filled tankers returning by road from Bokaro on a 48-50 hours journey.

The Chief Minister said that the state government had already requested the Centre to allocate 20 additional tankers (conducive to rail travel) to allow for regular evacuation of 90 MT LMO from Bokaro on a daily basis, but had been told that only two would be provided, and even those were yet to come.