If it doesn’t do that, what Uddhav Thackeray postpones addressing today will be there on the table to confront, for whoever anchors the Sena in the years ahead, observes Shyam G Menon.

There isn’t an election in recent memory that the BJP faced without marshalling its fringe elements or allowing the latter some venting.

To an observer of politics, this model which features shaping emotional India into dependable votes has been the Right-Wing’s forte.

There is nothing exceptional about it.

The differentiator has always been the willingness to indulge provocative themes; a pathway to success, many of us hesitate to legitimize given the social unease and pain it causes.

Much before the current BJP juggernaut got rolling, this model was pursued by the Shiv Sena.

Rooted in regional pride, the party manufactured its identity through a series of aggressive campaigns.

The family leading the Sena is now into its third generation and the party has stayed a force to reckon with in Maharashtra, including as part of the state government.

In other words, the political brew marketed by the Sena worked.

Till now, that is — for as of late June 2022, it finds itself a mellow version of its former self and challenged on home turf by a wealthier merchant of the emotional and aggressive: the BJP.

Positioning itself as an alternative choice to the Sena and the Maha Vikas Aghadi (MVA) government the Sena is currently part of, the BJP in Maharashtra dons the hybrid garb of emotional appeal and the bogey of economic development.

It is a game that forces the Sena to articulate what it has become and in doing so, allows the BJP to recruit old school Sainiks and eat into political space the Sena may vacate.

The Sena’s structure (so far it has revolved around one family) is a weakness its political opponents will exploit.

On the other hand, its reluctance to let go of Hindutva, makes the bigger BJP seem the Sena’s ideal big brother.

It is imagery consistently milked to its advantage by the BJP.

Probably due to Uddhav Thackeray’s style of leadership or as a product of collaborating with the Nationalist Congress Party (NCP) and the Congress, the Sena in MVA has been a toned-down version of the belligerence it is famous for.

It was a relief; Mumbai breathed easy.

The sense of being perpetually haunted by the potential for political violence reduced during Uddhav Thackeray’s tenure as chief minister.

COVID-19 may have also played a role, for the pandemic and the widespread threat to life it poses, compels politics to focus on the relevant.

In terms of ideology, the MVA is a collaboration by odd bedfellows.

For some Shiv Sainiks, the party’s departure in behaviour from the old Sena, has no doubt been disappointing.

They are too deeply stuck in the past to risk walking a different path.

As is the case in India’s politics, the grievances wouldn’t be just cultural.

There is also the question of how the public perceives a political party, for in India, power flows from perception.

This is why the politics of aggression, shock and controversy have counted.

For a while now, the media has reported fissures of the above sort pulling the Sena this way and that.

It is aided in no small measure by the fishing expeditions of the BJP.

Significantly richer than other parties around and capable of applying pressure thanks to it being in power at the Centre, the BJP has stayed busy making life difficult for state governments run by opposition parties.

Late June 2022, the MVA government’s future hung in the balance after its senior leader Eknath Shinde decamped with several MLAs.

On June 23, the media reported Shinde urging his party to quit the ‘unnatural alliance’ that is the MVA.

Thackeray moved out from the chief minister’s official residence but reiterated his commitment to Hindutva. 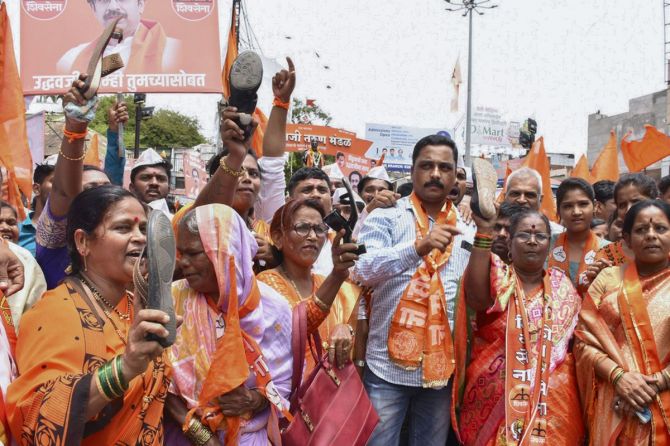 Its current predicament is a fork in the road, long predicted for the Sena.

It is a situation that stands forecast for the BJP too; the BJP’s turn will come in the years ahead.

The blunt truth is — there is only so much that religion, patriotism, regionalism, language and such can deliver politically in today’s world.

It is a self-fatiguing, conservative paradigm.

When one burst of energy exhausts, recharge is possible through opportunistically engineered causes, something the BJP and its fringe elements have shown multiple times.

They have herded us through many avoidable, meaningless controversies.

But every burst and the predictable pattern of each burst — will keep on augmenting the gathering exhaustion by irrelevance.

Till the politics stands divorced from prevailing demographics, social reality and thought. An abject disconnect then takes hold.

This is the danger the Sena, the BJP and other parties cast on similar lines, face.

The Sena may be called a tiger.

But riding one, changing the nature of the animal while still on it, teaching it to adapt and survive in shrinking habitat and depleting prey base – these are tough things to do.

Further, unlike the BJP, which can bank on the RSS to keep its ecosystem synthetically alive and infused with scale, the Sena is restrained by strong regional identity.

Viewed so, the relatively quiet Sena that has been a hallmark of MVA rule so far, may be explained.

An avatar of approachability and responsible conduct is the direction to take.

Traditional outlook and perceived loss of masculinity will conspire against it.

The BJP loves to compare the Sena in its present form, to a defanged tiger. It doesn’t matter. They will keep baiting.

The Sena should explore new ground.

If it doesn’t do that, what Uddhav Thackeray postpones addressing today will be there on the table to confront, for whoever anchors the Sena in the years ahead.

The same holds true for national politics. Tomorrow’s political parties may be those at the crossroads today and deciding what next; not those preening in their dominant grip on power.

What the latter category ignores in its quest to create saleable formulae for political power is how significantly the world and the people living in it, have changed.