Phattuseneri is one of 21 villages in Kotia gram panchayat that lie at the centre of a longstanding border conflict between Odisha and Andhra Pradesh. 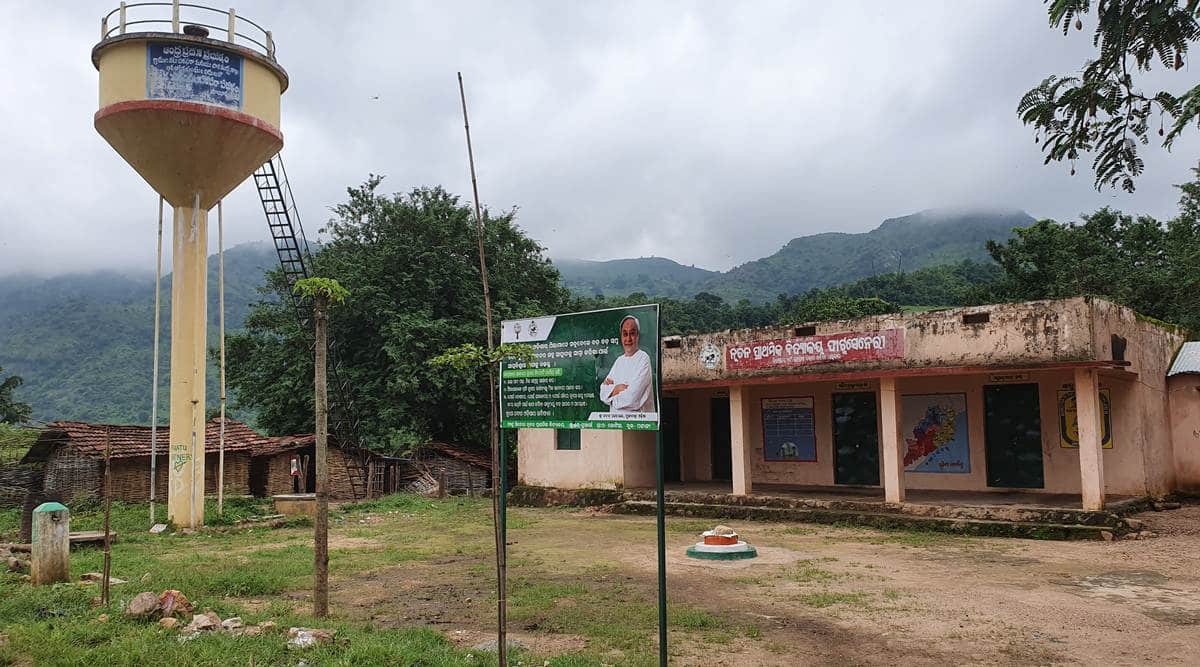 On a Wednesday afternoon, it’s all quiet at the primary school in Phattuseneri village in Kotia gram panchayat in Koraput district. The school, with a map of Odisha on one of its walls, is shut — it is open only two days a week owing to the pandemic — but the students are away, at the nearby Telugu-medium Mandal Parishad primary school.

The Telugu-medium school, propped up by bamboo poles and an asbestos roof, came up five months ago. All around the temporary structure are banners and posters announcing schemes of the Andhra Pradesh government. As a group of children recite numbers in Telugu, the teacher, A Ganesha, says, “There are seven students enrolled in Class 1 in this school. The same students are enrolled in the Odia-medium school as well.”

Phattuseneri is one of 21 villages in Kotia gram panchayat that lie at the centre of a longstanding border conflict between Odisha and Andhra Pradesh.

On August 31, the Supreme Court advised both the state governments to resolve the border dispute after Odisha filed a case of contempt in the apex court over Andhra’s decision to conduct rural elections in six villages in the region. The bench of Justices A M Khanwilkar and Sanjiv Khanna granted both states six weeks to hold political discussions to resolve the dispute.

But on the ground, little has changed, with the states only intensifying their interventions through social schemes. Two weeks ago, a team from Andhra Pradesh arrived here and conducted bhumi puja for an anganwadi centre, an arogya centre, a farmers’ hall and a panchayat office, besides carrying out a plantation drive. That prompted a team from Odisha to rush to the spot a day later.

It’s this tug of war that has dominated the lives of people and officials in these parts.

In Phattuseneri, while electricity is provided by the Andhra Pradesh, both the governments provide drinking water and make it a point to advertise the same through banners and hoardings on water tanks.

“Both the states have been fighting over this region. Often, development work gets stopped because of their tussle. At the end of the day, we are okay being part of whichever state that provides us better opportunities,” says Pilku Tadingi, 27, of Upra Sembi village, speaking in Odia. His Aadhaar card idntifies him as being from Upra Sembi village, Koraput district, Odisha.

Three houses away, in the same village, is Tadanki Sriram, 26, whose Aadhaar card says he is a resident of Yeguva Sembi, Sariki, Vizianagram district, AP.

Around 12 km from here, in Madkar village, each generation speaks a different language. Babula Tadingi, 18, a first generation learner, speaks Odia, one of the few who can. Others speak Kui, a language of the Kondh tribe. The younger children speak fluent Telugu, with many being enrolled in Telugu-medium residential schools in Salur.

Officials say contradictions also arise while identifying beneficiaries for government schemes. For instance, the Rana and Dora communities have tribal status in Andhra Pradesh, while they are in the OBC category in Odisha.

In 2018, the AP government had provided Aadhaar cards and initiated the construction of roads in the region. In retaliation, the same year, Odisha declared a Rs 150-crore development package for the region. In mid-2019, for the first time, all the villages in the disputed region became accessible by road. In January, the first ever mobile tower was set up by the Odisha state government in the area, followed by an announcement the following month that Kotia would be developed into a model panchayat.

“Our claim is that we have been exercising jurisdiction in the region since Odisha was formed and our rule is clear that in all these villages, our schemes, development activities, and additional support in terms of infrastructure and livelihood will be extended to the residents of Kotia,” Koraput District Collector Abdaal M Akhtar said.

AP revenue officials, on the other hand, maintained that the disputed villages are administered by their state government and the villagers also receive benefits of various schemes by the AP government.

But like most disputes, this one goes back a long way.

Prior to April 1, 1936, the villages of Kotia panchayat were part of Jeypore princely state. In 1936, the Government of India issued an order to create a separate province on linguistic basis. The order demarcated Odisha from the erstwhile Madras presidency, with the latter including present-day Andhra Pradesh. However, in 1942, the Madras government contested the boundary and appointed G S Gilby to demarcate the two states. In a joint survey of Odisha, Bihar and Madhya Pradesh, seven villages of Kotia gram panchayat under Pottangi block were recorded as revenue villages under Odisha. At the time of the survey, 21 villages were left out and not surveyed. At the time of creation of the state of Andhra Pradesh in 1955, the villages were not surveyed by the Andhra Pradesh government either.

There has been no resolution since then, with both states claiming the area as part of their territory.