When live shows resumed in Delhi in October last year, actors from Asmita Theatre Group stood in a black box theatre on a stage made from wooden planks and platforms, and delivered a stirring performance of Ummeed (Hope), a play about the importance of education in improving the lives of children. It was attended by a houseful crowd of 40, who could easily afford the Rs 10 per person donor pass.

Word spread about Asmita’s performances, and, five months later, volunteers are having to politely turn away a lot of people every evening because COVID-19 protocol does not permit them to allow more than 40 patrons at a time. Morale is high in the group, even if profit margins are not. “Like most theatre groups, we have not had any work since March 2020. It is difficult for us to even think about hiring a regular auditorium for the next couple of years as people are afraid of large crowds in closed spaces. The black box studio lets us keep in touch with the audience that wants to see our work,” says Arvind Gaur, director of Asmita. Their earnings — “hamare chai ka kharcha nikal jata hain (enough to pay for our tea)” — may even be put into purchasing small props for their performances.

Black boxes are small and empty spaces — unlike auditoriums — whose flexible and neutral nature allow artistes to create imaginatively designed shows. What Gaur did was rearrange the furniture of their rehearsal space and change the colour of the walls to create a black box theatre. It was an unconventional move but not unique. Across India, artistes are keeping theatre alive — by thinking small. The pandemic has impacted the budgets of every group and practitioner and, with the country in the middle of a possible second wave, the situation is unlikely to improve soon. Intimate venues, restricted entries, limited cast and pared-down scripts are the new normal as COVID shrinks theatre.

Historically, whenever a major upheaval has shaken the foundations of society, it has prompted alternative voices to emerge. In small studios and people’s homes, several major arts movements, such as Dadaism, were born in the wake of crises, such as World War I. In the 1960s and ’70s, apartments became popular venues and black box theatres came up to push avant garde ideas into the open. Polish theatre master Jerzy Grotowski, for instance, did great work in using spaces in unusual ways.

“Theatre as a sponsored or corporate activity has gone down and will reduce further. The entertainment sector functions on the fringes of hardcore industries. The top of the economic pyramid is not stable at present, so there will be less patronage for the arts. Theatre and other creative arts now have to survive, not as a major funded event or as big shows in auditoriums of 700-1,000 people but as niche, connoisseur-driven happenings,” says Santanu Bose, dean (Academics), the National School of Drama in Delhi.

He has converted the basement of a building, where he stays in Delhi’s Chittaranjan Park, into a theatre. “After a show, the audience comes to my flat and we discuss the performance over a drink or a little dinner. The conversations unfurl slowly so there is no pressure for you to say something immediately. The feeling is something between inviting a friend home and an audience member to a theatre,” says Bose.
In India, with the inoculation drive underway, black box theatres are being constructed in homes, schoolrooms, terraces, foyers and, in case of The Box, the first black box studio in Pune, an industrial shed. The phenomena of the small studio has been growing in almost every city over the last five to six years. In the wake of the pandemic, these places are most active as, being smaller, the rent is affordable. “In a bigger space, the moment you switch on the AC, it starts costing you and there isn’t enough footfall to justify it,” says Sunil Shanbag, a Sangeet Natak Akademi-winning theatre director, actor and documentary filmmaker based in Mumbai.

The majority of the new work being presented in small spaces carries the shadow of the pandemic. Themes of introspection, loneliness and mortality mirror the anxieties of the world. In Herbert, directed by Bose, a young man speaks to the dead. It premiered in December, at the end of a difficult year, when the future was uncertain. In The Thing Is…, directed by Mumbai-based Sapan Saran, a theatre artiste asks himself what art means; the newly-married wife of a writer wishes that she could share his world of letters, which is closed to her physically and psychologically; and a man, who seems defeated, shows how a cynical class system in India determines who gets opportunities and who does not. 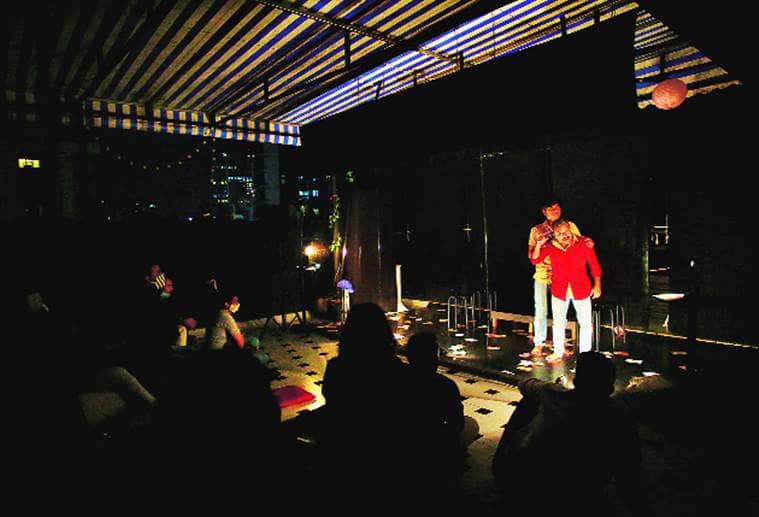 “The amount of desperation and distress we saw last year is incomparable in living memory not only nationwide but also internationally. This has given us, theatre makers, more understanding of how human beings behave in times of crisis. I feel that performers are researching human vulnerabilities at present and whenever mainstream theatre strikes back, it will do so with new knowledge and deeper insight to the minds of the people in distress,” says Bose.

A large number of shows are solos or with a handful of actors and minimal sets. This is both because directors cannot do a play with many artistes in a pandemic situation and because a large number of performers returned home to small towns and villages as work dried up in cities. Ancillary services that prop up theatre, such as technicians and the craftsmen who store and put up sets, have almost vanished. Those who made the long walk back home and have not returned to the cities for a year have, most likely, picked up other jobs, such as driving auto-rickshaws.

“Even in the mainstream space, we can see plays with fewer characters being produced. In the Marathi theatre, for economic reasons, the three- or four- actor plays had already become a trend pre-pandemic as getting actors was difficult since most were busy with films. This will continue even after the pandemic. Payment to performers will also come down, for sure, and elaborate productions will not happen immediately,” says Shanbag.

But even as production scales shrink, confronted with an unfolding calamity, theatre companies and artistes have begun to talk to one another more than ever before. They check on co-workers, such as actors, technicians, make-up people, istriwallahs and carpenters, and have formed an informal support system for each other. In Mumbai, the community spirit showed its strength by creating a unique black box studio on a rooftop in September. It all began when Shanbag was at Studio Tamaasha, a venue that he had founded with Saran in 2014. Across the world, the coronavirus had closed spaces like Studio Tamaasha and brought performing artists to their knees. As they sat in the silent studio, Shanbag and Saran decided that a fightback deserved a powerful symbol — a new theatre in the shadow of the old one.

The black box they designed with a group of close associates is made up of things cannibalised from older productions, bought at cut-price or donated by theatre colleagues — thick fabric for the walls, cheap study lamps and Chinese lanterns for illumination. A transparent plastic sheet separated the stage from the audience to protect the front row from actors not in masks. “What was very emotional was how the word spread and a number of our performer friends pitched in to make the theatre happen. Wearing masks and keeping their distance, they came in for a few hours regularly to paint the venue and build the theatre with their hands,” he says.

More than 10 shows have taken place in the black box. “We found that audience members were reluctant to leave because they were having a good time. This was not about money as only 20 people could be accommodated after taking COVID-19 precautions. What is important is watching a performance with other people. That is also a celebration of life. We’ve missed that in the last year,” says Shanbag.

While they experiment with form and content afresh, theatre artistes are now looking for a strong push from the government, cultural organisations and festivals. There is no independent theatre venture that will not run a loss at the moment and, even to imagine a play, directors have to put in money of their own. As theatre companies create new revenue models, the small performance is taking centre stage. The founder-director of Delhi’s Atelier Theatre, Kuljeet Singh, for instance, is planning a fringe festival that will be held simultaneously, in 25 small spaces across the NCR, including Noida, Ghaziabad and Dwarka, places that are not known for theatre. “Each venue will have two shows, which means that 50 plays will be staged in a single day. In the last 10 years, we have told the audience to come to one particular area, such as Mandi House, to watch theatre. Now, we will go to the public with our bouquet of plays. When you have regular performances in three or four small spaces, it will cultivate a theatre-going crowd. I feel that small spaces will become important post-pandemic and be breadwinners for a lot of theatrewallahs,” he says.

A teacher, who quit his job to take up theatre full-time, Singh is updating the technology of a black box he owns in Ghitorni to enable hybrid performances. Theatre artists have created a lot of online work during the pandemic to reach out to audiences across the world and live performances are unlikely to end streamed shows. As a result, hybrid shows, with a mix of both, seem to be the way forward for creative and economic reasons.

“The idiom of theatre is different now, not just in content and form but also the way we envisage reaching out to our audiences. While COVID-19 has ceased movement and performance for almost a year, it has compelled theatrewallahs to explore avenues which otherwise would have take many years to be employed,” he says. The Atelier Theatre black box is among the few that is equipping for the new era of hybrid performances. “Technology can help us reach a wide cross-section of people. We don’t need just the strong WiFi connection but an entirely different system. We are getting a WiFi camera that will be connected with a powerful laptop so that we can broadcast shows as they happen, enabling people in Europe or America to attend a play as it unfolds in Delhi. This will also help us experiment with new kinds of theatre,” he says. “We have learnt a lot from the pandemic and we will come out the better for it,” he adds.