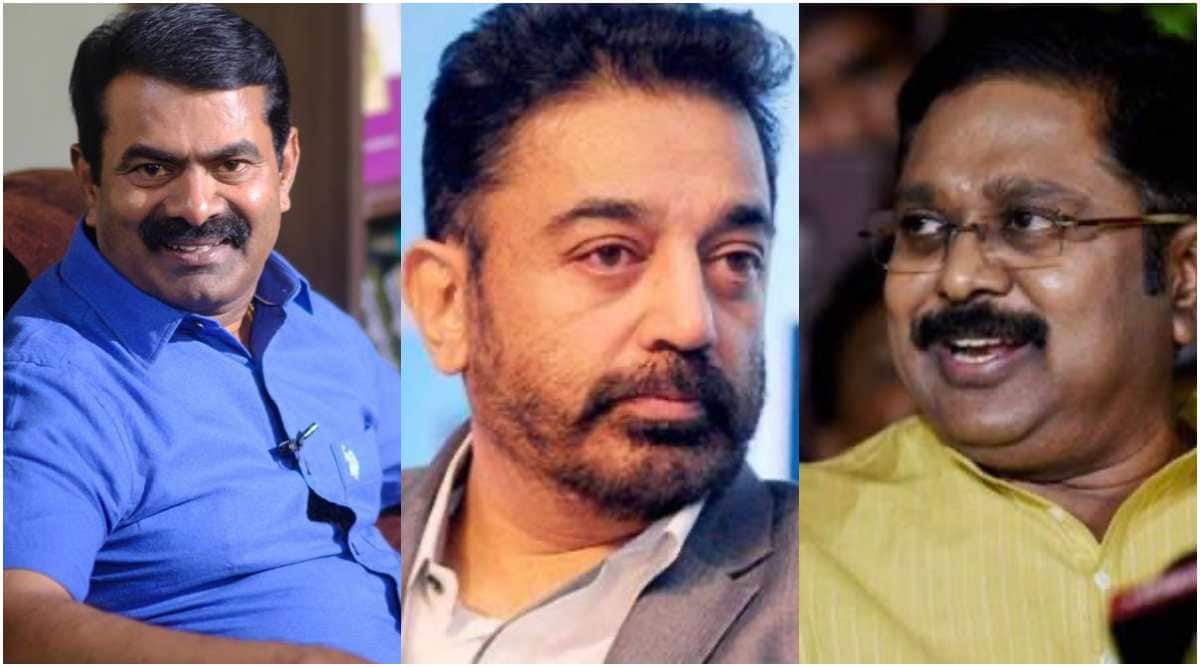 The Tamil Nadu Assembly elections results showed that the winners were mostly split between the DMK and AIADMK led alliances which left very little space for others. The focus garnered during campaigning by parties like Kamal Haasan’s Makkal Needhi Maiam, TTV Dhinakaran’s Amma Makkal Munnetra Kazhagam and Seeman’s Naam Tamizhar Katchi did not however translate into electoral success.

Actor Kamal Haasan made his poll debut from Coimbatore (South) constituency, seen as a safe bet for the senior actor as he averted a direct contest with any of the Dravidian parties. But BJP Mahila Morcha president Vanathi Srinivasan ended up defeating the veteran actor by a slender margin of 1,728 votes though she was behind for most of the counting.

T T V Dhinakaran, the incumbent MLA from RK Nagar, tried his luck from Kovilpatti this time. But AIADMK minister C Kadambur Raju won the seat by 12,403 votes, in a way ending Dhinakaran’s claim to some of the AIADMK legacy.

Naam Tamizhar coordinator Seeman failed to win from Thiruvottiyur where he took on both the AIADMK and DMK. Seeman received 48,597 votes to come third in a contest won comprehensively by DMK’s KP Shankar who secured 88,185 votes.

Even in the two alliances there were major upsets. AIADMK fisheries minister D Jayakumar lost from the Royapuram constituency where he had won five out of the six times before. He lost by 27,779 votes to DMK candidate and theatre baron IDream R Murthy.

Actor Kushboo’s election debut did not turn out to be as successful as her film career. The actor lost the Thousand Lights constituency to DMK’s Ezhilan by a margin of 32,462. The BJP leader was earlier supposed to take on DMK youth-wing secretary Udhayanidhi Stalin in Chepauk-Tiruvallikeni which the NDA later allocated to the PMK.

Premalatha Vijayakanth of DMDK contested from Virudachalam, a constituency that gave their party leader Captain Vijayakanth his first electoral victory in 2006. Premalatha took on Congress candidate Radhakrishnan and PMK’s J Karthikeyan. After a few initial rounds, the contest became a battle between Congress and PMK. At the end of the counting process, Premalatha was pushed to distant third position with 25,908 votes. Congress won the constituency by a margin of 862 votes.

One of the biggest upsets of the elections however came in Bodinayakkanur of Theni district where DMK’s propaganda secretary Thanga Tamilselvan was defeated after a tough fight by Deputy Chief Minister and AIADMK coordinator O Pannerselvam. Tamilsevan, a former Rajya Sabha MP and three-time AIADMK MLA, joined AMMK in support of TTV Dhinakaran before shifting his base to DMK in 2019. Both had never lost an election before. After 29 rounds, Pannerselvam emerged victorious by a margin of 11,021 votes.