Bahuguna was admitted to the hospital on May 8, and was on life support. A statement from AIIMS-Rishikesh said he had comorbidities, including diabetes and hypertension, and had contracted Covid pneumonia. 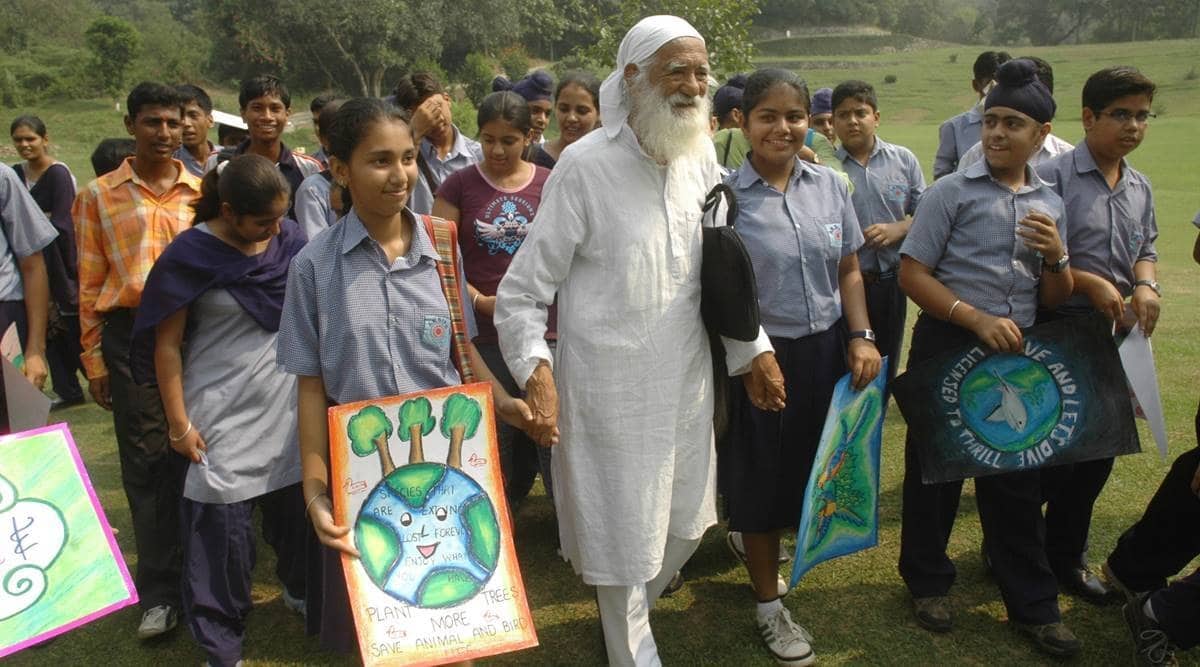 Sunderlal Bahuguna, the Gandhian who was the driving force behind the legendary Chipko movement against deforestation that marked a key milestone in Indian environmentalism, succumbed to Covid at the All India Institute of Medical Sciences in Rishikesh at 12.05 pm Friday. He was 94.

Bahuguna was admitted to the hospital on May 8, and was on life support. A statement from AIIMS-Rishikesh said he had comorbidities, including diabetes and hypertension, and had contracted Covid pneumonia.

Prime Minister Narendra Modi described Bahuguna’s demise as a “monumental loss” for the nation. “He manifested our centuries old ethos of living in harmony with nature. His simplicity and spirit of compassion will never be forgotten,” he posted on Twitter.

President Ram Nath Kovind described Bahuguna as “a legend in his own right” who “made conservation a people’s movement”.

Born on January 9, 1927 in Maroda village in Tehri — now a district in Uttarakhand — Bahuguna’s life was dedicated to social causes, activism, and writing. He participated in the Independence movement and was subsequently a part of Vinoba Bhave’s Sarvodaya movement.

Over the decades, his name became closely associated with environmental issues — in particular, the Chipko movement and protests against the building of the Tehri dam from the 1980s to 2004. Bahuguna’s Gandhian methods of protest and hunger strikes against the dam defined the Tehri movement for over two decades.

“After the Chipko movement in the 1970s, he gave the message across the globe that ecology and ecosystem are more important. He was of the opinion that ecology and economy should go together. He was also a follower of Gandhian values in food, attire, and behaviour and celebrated January 26 and August 15 as festivals. He observed a fast on Shaheed Diwas,” Dehradun-based environmentalist Anil Prakash Joshi said.

Joshi, who is a Padma Bhushan awardee, had worked closely with Bahuguna in his final years. Bahuguna himself was awarded the Padma Vibhushan in 2009. In 1981, he had refused to accept the Padma Shri over the government’s refusal to cancel the Tehri dam project despite his protests.

Historian Dr Shekhar Pathak, founder of People’s Association for Himalaya Area Research and author of the recently released The Chipko Movement — a People’s History, said he first met Bahuguna in 1974. Four years earlier, a flood along the Alakananda river had triggered discussions on mass tree-felling, and the Chipko movement had started spreading across the state.

“At that time, Sunderlalji had started what would become a four-month long padayatra through Tehri, Chamoli, Uttarkashi, Almora. I was an MA student at the time living in Almora. In the winter of 1974, he arrived in Chamoli. He sought us — young students and activists — out. He told us he felt that we would work for the betterment of people,’’ Pathak said.

Pathak joined the padayatra along with hundreds of others — journalists, students, teachers, artists and local villagers. “There was one big message that he gave us — it was impossible to truly know a region just by reading books. While as students we read widely, it was during our travels through the remotest areas that we began understanding the issues of communities,” he said.

“His second message was inter-dependence of human communities and nature — how intricately human lives were intertwined with forests, rivers and the wilderness. We trekked from Nepal to the Himachal border. The 1974 padayatra was life-changing for all who participated — it shaped what we would go on to do,’’ Pathak said.

At this time, while Bahuguna worked on environmental issues, his main focus was on the menace of alcoholism in the hills and empowerment of Dalits. It was Bahuguna’s work that led to the entry of Dalits in temples in Tehri district. He went on to establish an ashram for Dalits, in particular women.

Veteran environmentalist Chandi Prasad Bhatt, who was among those who led the Chipko movement in Chamoli, said the anti-liquor movement from 1968 led to the state government banning the sale of alcohol in 1971.

The Chipko movement came to a halt during the Emergency, but when it resurfaced in 1977, Bahuguna emerged as one of its tallest leaders.

“The Chipko movement was a string of peasant movements centred around livelihood, which was intimately dependent on forests. Sunderlalji understood this and maintained that our movements need to be critically aligned with our needs. He was a strong communicator and the high and mighty listened to him. He carried the discourse of environment, forests and ecology to the rest of the country and placed it on an international stage,’’ Dr Ravi Chopra, director, People’s Science Institute, Dehradun, said.

According to historian and environmentalist Lokesh Ohri, the Chipko movement was started as an agitation against trees being felled by forest contractors. The protesters felt that the forests and its resources belonged to them and they should get a share of the revenue generated. “The movement took a different turn under him (Bahuguna). He emphasised that protection of trees should not be seen in financial terms,” Ohri said.