Pratap Bhanu Mehta writes: The issues in the farm bills are complex. But no matter which side you are on, you should now worry about how the Supreme Court is interpreting its function. The court is, perhaps unintentionally but damagingly, seeking to break the momentum of a social movement. 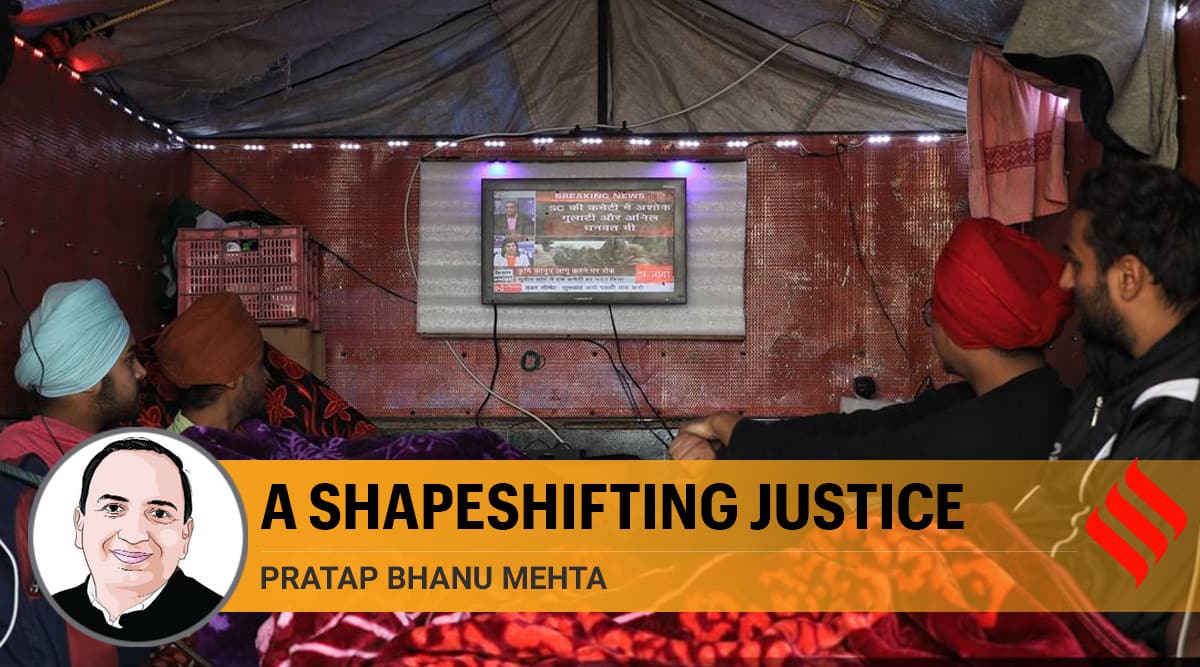 The Supreme Court is increasingly looking like one of those fantasy creatures with disjointed shapes, where nothing is what it appears to be. The forms keep mysteriously changing, with benign faces masking more ominous fangs, and shapes shifting as the need arises. So this is a constitutional court that does not pronounce on the constitutionality of laws. Instead, it wades into political and administrative management without the imprimatur of any law. It positions itself as a saviour of democracy only to make a mockery of the parliamentary process. It wades into conflict management, only to hide behind the façade of some expert committee. It pretends that distributive conflicts are technical ones. It finds ruses to defuse genuine democratic protest. Yet it will not facilitate the orderly and law-bound expression of protest.

It will accuse governments of not responding, while it itself perpetually refuses to pronounce on constitutionality and law in a time-bound manner. It speaks the language of neutrality, of being above the fray, but is clearly willing to disrupt the normal political give and take in a democracy. The court’s order putting on hold the farm bills is terrible constitutional precedent, bereft of judgment. It has an odour of cynicism behind it.

The issues in the farm bills are complex. But no matter which side you are on, you should now worry about how the Supreme Court is interpreting its function. It has suspended the implementation of the farm laws, and created a committee to ascertain the various grievances. But it is not clear what the legal basis of this suspension is. The court’s action, at first sight, is a violation of separation of powers. It also gives the misleading impression that a distributive conflict can be resolved by technical or judicial means. It is also not a court’s job to mediate a political dispute. Its job is to determine unconstitutionality or illegality. Even in suspending laws there needs to be some prima facie case that these lapses might have taken place. But instead of doing a hearing on the substance — the possible federalism challenge, the possible challenge based on the ouster of grievance redressal — and then pronouncing a stay, it has simply decided to create a committee to hear farmers’ grievances and wade into political territory.

The framework governing agriculture needs serious reform. The objective of reform must be to improve farmers’ incomes and well-being, to increase crop diversification, make agriculture more environmentally sustainable, make subsidies less counterproductive, keep food inflation down, and ensure that nutrition reaches all. Achieving all these objectives in no easy task, especially in states like Punjab. It will require immense trust to move to a new regime in agriculture. The government was right to think reforms were necessary. But it was prioritising the wrong reforms by beginning with the hollow promise of “choice of traders,” which did not tackle the underlying issues, but created more uncertainty all around.

In not responding to legitimate concerns of the farmers, the government was forfeiting their trust. The farmers were well within their rights to protest, and did so with grace, despite repeated government attempts to delegitimise them as anti-national. There was a stalemate. In principle, any mediation to break the stalemate is welcome. But the mediation has to be a political process between the government and the people. If there is no unconstitutionality involved, Parliament has to fix what it broke.

Here is why what the Supreme Court has done is dangerous. It has set a new precedent for putting on hold laws passed by Parliament without substantive hearings on the content of the laws. It has muddied all the possible lines of judicial procedure, where it is not clear what the locus standi of different counsel are, what are the specific prayers that need to be addressed and how the court’s remedies address them. It has not really heard the farmers, whose counsel were not fully heard before the passing of orders. This is a monumental irony since a court whose own procedures seem to be opaque sets itself up as the arbiter of responsive government. This is not public interest litigation, it is whimsy on steroids.

The court is, perhaps unintentionally but damagingly, seeking to break the momentum of a social movement. You can have a view on whether the government is right or the farmers. But it will be up to the people and the political process to decide who is correct, as long as there is no unconstitutionality involved. But political movements require collective action and timing, they are not easy to assemble. There is no question that the timing of the order has the objective to save the government the embarrassment of intensifying protests. By appointing a committee, the court has shifted the onus on the farmers to stop their protests, or else appear unreasonable. In a related matter, on the form in which protests in Delhi should be allowed, the court has also positioned itself as an arbiter of national security by taking seriously the Attorney General’s contention that farmers’ protests may be the vehicle for the Khalistan movement. This is delegitimisation of protest by misdirection. It is preparing the ground for the protests on a significant scale being rendered illegal.

In another ruse, the court seems to have redefined the function of mediation. If the function of a committee is mediation, then the court has violated the first rule of mediation: The mediators must be acceptable to all parties and appointed in consultation with them. If the purpose of the committee is to ascertain facts, why not just do it through open hearings of all parties in the court?

The farmers did not need the paternalism of the court, the way in which it is infantilising them, protecting them from themselves. What they need is clarity of law where relevant, and the right to make their demands heard through the political process and civil society. By being too clever by half, the court has potentially created an explosive situation. It has set a bad precedent where implementation of laws can be suspended without legal basis. It has created mistrust in farmers about its intention. The court seems to have given the government a setback, but it is more a “get out of jail” card: Saving it from being on the political backfoot in the face of a movement. By this order, the court has forfeited the very thing it needs most: Being a repository of trust.

This article first appeared in the print edition on January 13, 2021, under the title “A shapeshifting justice”. The writer is contributing editor, The Indian Express