‘I am not scared of corona, I am sure God is protecting us.’ 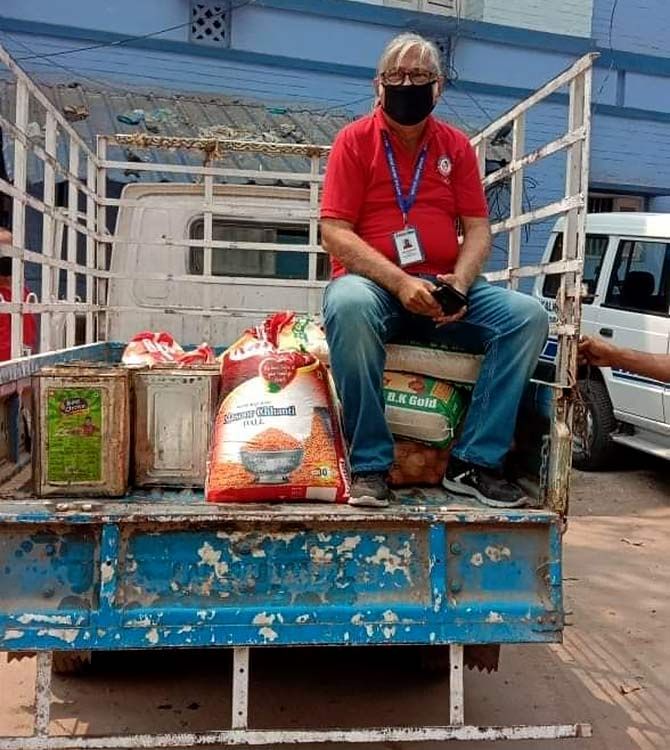 When elders are being advised to keep away from the COVID-19 battlefield, 70-year-old Arup Sengupta, a TB survivor, has been going out every day to provide ration kits to the poor in and around Kolkata.

Mr Sengupta believes he survived tuberculosis because he was meant to do his bit during the coronavirus crisis.

“In the 1950s and 1960s, TB was worse than corona, there was no hope,” remembers Mr Sengupta who spent four days on a footpath in Kalighat, Kolkata, in 1968 after his family threw him and his recently widowed mother out of the house fearing infection.

He was tended to by Mother Teresa, a nun just starting out in Kolkata at that time.

“Ma” as he calls her, looked after him in between tending to leprosy patients as she bandaged their bleeding wounds.

“Now we have hand sanitisers and what not, while she would just dabble her hands with water or wipe it in her apron to have a cup of tea,” Mr Sengupta recalls.

“She did not contract any infectious disease and lived till 89,” he says over the phone from Kolkata.

Mother Teresa sent him to a tuberculosis sanitorium in Kurseong where he spent two years. Of the 38 others in the ward, only he and another boy survived.

“I have all the diseases, but I am not scared. I have seen death all around me. Covid is just another disease. It is as bad as the other ones and there are more deadly ones around the corner,” says Mr Sengupta who retired after a long career in the corporate sector in 2016 to start Notun Jibon, an organisation working among sex workers and their children in the red-light district of Kalighat.

“Mother Teresa always used to tell me, ‘Look if your number is up, it is up’. I absolutely believe that. I have COPD, I carry my oxygen cylinder in the car, have to nebulise myself and am enjoying every bit of what I am doing,” says Mr Sengupta who played hockey for Bengal and the drums for Usha Uthup early on in her musical journey.

Every day since the lockdown, he drives out with two other team members, Jhumki Banerjee and her 70+ father Barun. Their Alto car is followed by a mini-van carrying 60 ration kits — rice, dal, mustard oil, potato, onion — and hundreds of masks.

Two days ago, they travelled 6 hours to and fro to reach out to a village bordering Bangladesh. They distributed ration to 61 families who stood in queue wearing masks, separated by circles marked on the ground for social distancing.

“In the villages life goes on, but food is scarce. It is not reaching those who need it most,” he says.

At the end of a long day, Arup Sengupta tells Archana Masih/Rediff.com why he goes out each day to help those in need. His only protection being a mask and self-belief. 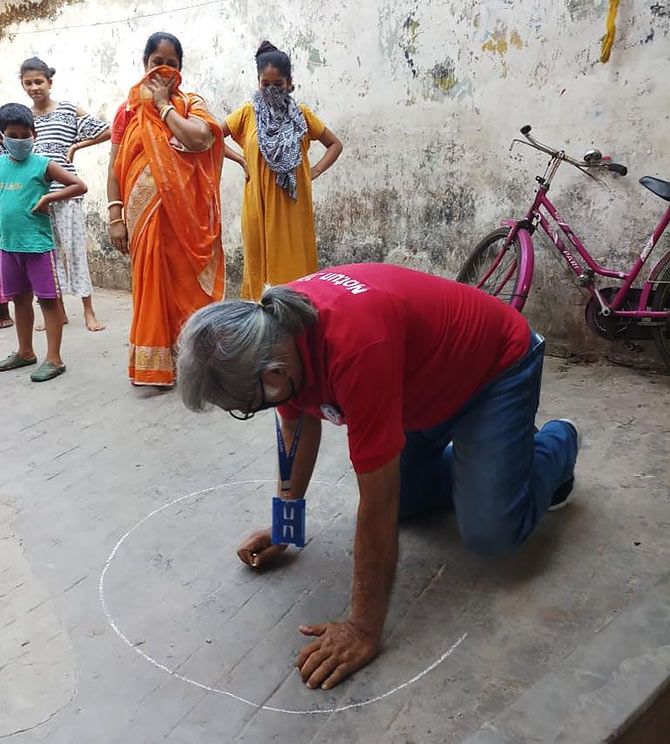 We are seven of us who set out each day. In the mini-van there are 4 unpaid volunteers.

On March 24 when the lockdown was declared, I got three passes for my car, mini truck and auto and went to the wholesale market to buy provisions. 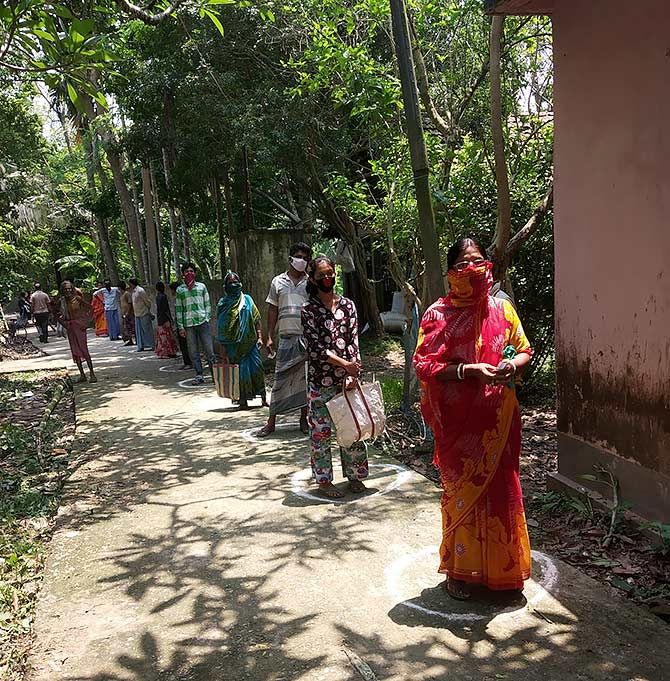 We run a school — the Saahaj Path Remedial School – with 40 children of sex workers and others. We bought rations for a week for them.

Every Tuesday, we give our children weekly rations. The school is inside the red light area of Kalighat.

We are also giving ration to 400 sex workers because their trade has halted at the moment.

We have gone out every day since then.

We also received appeals from senior citizens in need for rations. We drive all over Kolkata and give 20 kits to some very elderly people to their homes.

We have been going into villages to distribute packets which includes 2 kg of good quality rice, 2 kg potato, 1 kg masoor dal, half litre mustard oil.

In many places, we have given soya nuggets, sattu, moori (puffed rice).

For our school children it costs Rs 390 because we give them more nourishing food — milk, banana and a wholesome dinner.

The wholesale market opens for a few hours every day. We have to organise the money, transportation and vendor etc. The ration kits are then made and distributed. 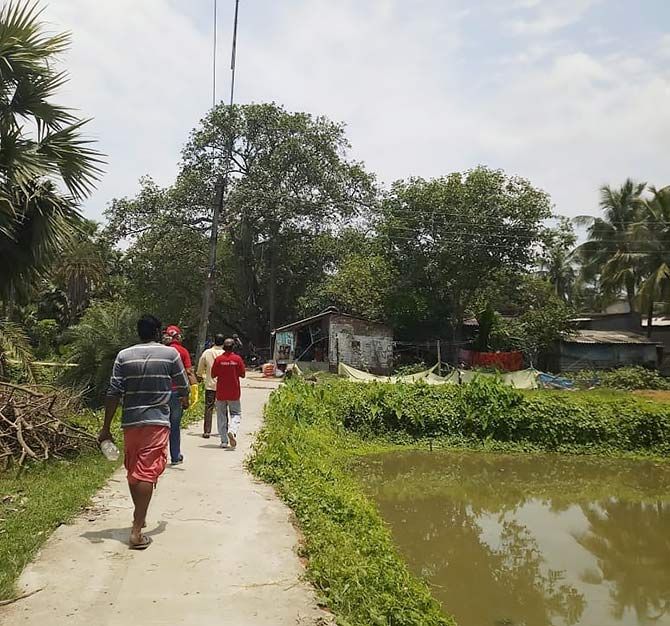 I have been doing this with the donations we have received. My classmates from St Joseph’s Darjeeling and friends from the corporate world have helped.

I need about Rs 5 lakhs for this month and have received a little over a lakh so far.

It is not easy, but money has always come. It will come.

Food is scarce and not reaching people.

Hunger is one problem that people are not discussing about. People on the streets are hungry. We get appeals for ration every day.

Most of the time we are working in the red zone and have a police permit.

We wear red t-shirts which is like our uniform. 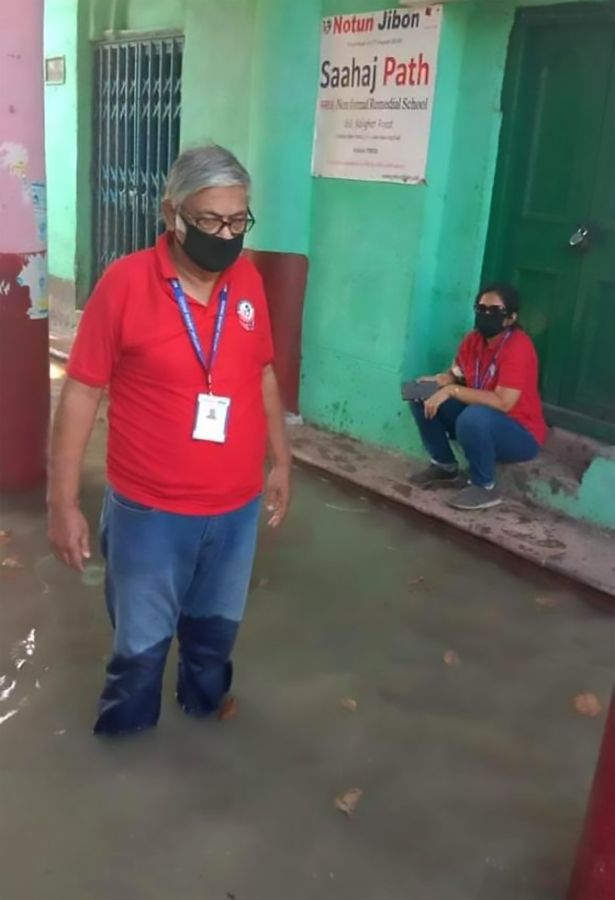 I have all the diseases, but I am not scared.

My wife was hale and hearty. She had a severe headache one day and when I took her to hospital, they said she was hemorrhaging. She passed away the next day.

We had started Notun Jibon together and began by distributing 200 blankets in the winter of 2016.

When my time has to come, it will. I do not fear it.

I wear a mask. I do not remove it till I return because once you take it off, you need a new one. It wears out and is susceptible to infection. We wear gloves while distributing the packets.

When I return home in the evening, I have a very hot shower, even the wallet, belt, shoes are put through hot water.

I am not scared of corona, I am sure God is protecting us. I also get a lot of strength from Mother Teresa.