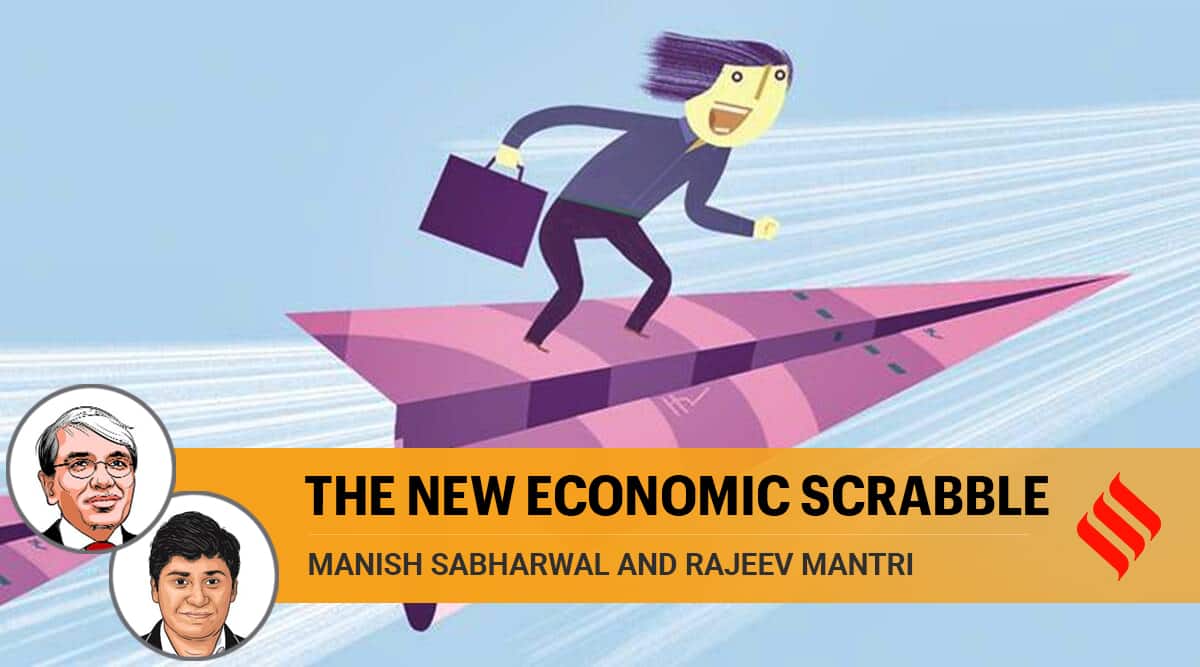 India’s startup ecosystem is radically breaking from its past in company valuations, unicorn numbers, funding round sizes, foreign interest, and growth. What’s going on? Historians suggest caution with origin stories — every theory just points to an earlier beginning. But we believe three acts of entrepreneurship from five years ago — Jio, UPI, and GST — have converged to accelerate our startup ecosystem. We also make the case that this triad of private, nonprofit, and government courage demonstrates the economic upsides of a better balance between the three sectors.

The Harvard economist Ricardo Hausmann suggests economic development is like a game of scrabble. Goods and services are made by stringing together productive capabilities — inputs, technologies, and tasks — just as words are made by putting letters together. Countries with a greater variety of capabilities can make more diverse and complex goods, just as a scrabble player who has more letters can generate more and longer words. If a country lacks a letter, it cannot make the words that use it. Moreover, the more letters a country has, the greater the number of uses it can find for any additional letter acquired. In Hausmann’s framing, the government provides the vowels and the private sector provides the consonants. The 1955 Avadi resolution poisoned India’s economic scrabble by restricting constants and shrinking the state’s resources to provide vowels. Our triad provides new letters and vowels that enable entrepreneurs to create newer and longer words. Let’s look at each in more detail:

JIO: India’s per GB internet data costs are just 3 per cent of those in the US. A bold and risky $35 billion bet made by a private company transformed Indians from being data deprived to data-rich; consumption has jumped 15 times because costs fell by over 90 per cent. The addition of millions of consumers and smartphones since Jio’s delightful five-year disruption of the market has exploded the most important universal metric in startup valuation — addressable market. Most Indians toil in low productivity and self-exploitation. Affordable digital connectivity is transforming 75 crore of them into consumers, entrepreneurs, employees, and suppliers.

UPI: Google’s letter to the US Federal Reserve suggesting America learn from India’s Universal Payments Interface (UPI) run by the remarkable nonprofit — National Payment Corporation of India — acknowledged that our real-time, low-cost, open-architecture payment plumbing is a public good. UPI’s mobile-first architecture is a key pillar of the paperless, presenceless, and cashless framework of the Aadhaar-seeded India Stack. UPI’s current four billion transactions a month — it will soon reach a billion a day — greatly reduces friction and costs for entrepreneurs and consumers in low-value payments. Remember the inefficiency and low reliability of cash-on-delivery?

GST: India’s economic tragedy began with the second five-year plan in 1956, leading entrepreneurs to conclude that the benefits of formality were lower than the costs. This informality bred corruption; transmission losses between how the law was written, interpreted, practiced, and enforced. More painfully, informality bred low-productivity enterprises with low-paying jobs, whose business model of regulatory arbitrage and tax evasion made formal enterprises uncompetitive. GST attacked complexity and incentivised law-abiding supply and distribution chains. It was long in the making but going live needed the risk-taking of starting with a second-best architecture, accepting some unjustifiable rates, and state revenue guarantees. The doubling of indirect tax registered enterprises since GST creates a virtuous economic cycle of higher total factor productivity for enterprises and employees.

India now has the highest ratio of unlisted to listed companies with a $1 billion valuation, suggests Neelkanth Mishra of Credit Suisse (a unicorn was born every 10 days this year). Initial public offering documents filed by early startups like Nykaa, Paytm, Zomato and PolicyBazaar roughly average a 10x valuation rise since the triad went live. Estimates suggest India’s startup ecosystem valuation will explode from $315 billion today to $1 trillion by 2025. An unintended delightful upside of Rs 2 lakh crore startup fundraising in 2021 is the mass diversion of high-quality young human capital from wage employment to job creation.

Humanity will never resolve the debate whether history is a social science or literature. The social science camp of Karl Marx believes circumstances are paramount and history makes people. But the literature camp of Carlyle believes people make history. As entrepreneurs, we would go crazy if we didn’t believe in the ability of individuals to give the push that history sometimes needs. Of course, the triad’s success needed talented civil servants, central bankers, foreign partners, committees, technology, and managers. But we believe the triad wouldn’t have happened in time for [email protected] if Prime Minister Narendra Modi, Mukesh Ambani, and Nandan Nilekani hadn’t provided conviction, persistence, and strategy.

English’s 26 letters — 21 consonants and five vowels — enable creating roughly two lakh dictionary words and 10 lakh usage words. Framing development as scrabble has much to teach the post-1947 economic policy; our 6.3 crore enterprises only translate to 23,000 companies with a paid-up capital of more than Rs 10 crore because consonants were restricted and vowels were misclassified or missing. The wonderful recent ghar wapasi of Air India is just the start of righting the historical wrong of misclassifying many private consonants as government vowels. A government does more when it does less.

In the third decade of the third millennium, one of India’s opportunities is China’s ongoing corrosion of Deng Xiaoping’s economic miracle built on a healthy balance between the state, entrepreneurs, and foreigners. Our mass prosperity after Independence was sabotaged by an imbalance between private, nonprofit, and government players because economic magic needs an engine firing on all three cylinders. The triad reinforces each element to drive inclusion and prosperity by enabling billions of people and millions of enterprises to do billions of sachet size transactions with low or no cost.

Gandhiji’s notion of democracy — where the weakest have the same opportunity as the strongest — needs an economic meritocracy only possible when entrepreneurs have all the consonants and vowels. India’s better scrabble has begun.

This column first appeared in the print edition on October 29, 2021 under the title ‘The new economic scrabble’. Sabharwal and Mantri are co-founder, Teamlease Services and Managing Director, Navam Capital respectively.