When organizers of the Tokyo Olympics announced that the 2020 Games would be delayed for a year and, in March, that no overseas spectators would be allowed into the country, few were as despondent as Kling and other hard-core Olympic pin traders 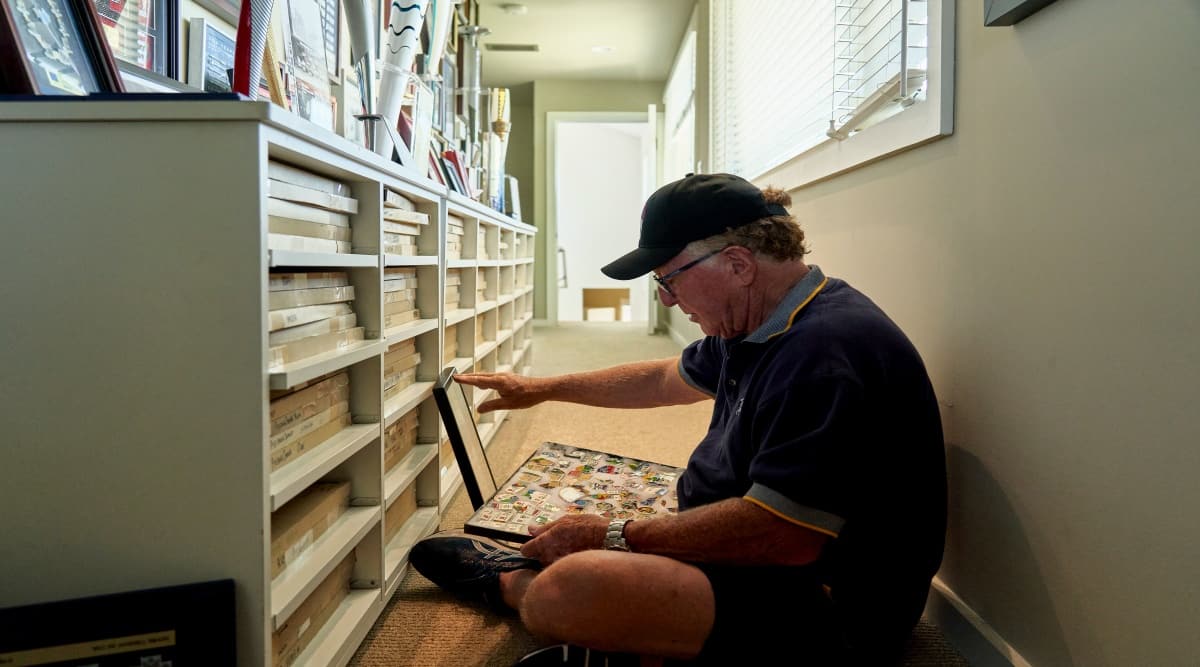 A few years ago, Bud Kling had three rooms added to his house in the Pacific Palisades section of Los Angeles. The builders used extra concrete along with a reinforcing metal beam, and not because Kling was expecting a crowd.

The rooms weren’t for people. They were designed to house and showcase his 30,000-strong collection of Olympic pins, the colorful and endlessly varied souvenirs that have been bought and traded at the games for decades.

Even when the builders were finished, Kling, a 74-year-old tennis coach, still had far more pins than he could fit in his home. He also owns about 100,000 “trading pins,” multiples of the same pin that can be swapped, and he hauls some of them to the games. His stash is stacked in his garage and in rented storage space.

“I have a very patient wife,” Kling said.

When organizers of the Tokyo Olympics announced that the 2020 Games would be delayed for a year and, in March, that no overseas spectators would be allowed into the country, few were as despondent as Kling and other hard-core Olympic pin traders. To them, the games are only partly about sports.

For every minute they spend watching competition, they spend one minute — maybe two — trading pins, either in impromptu scrums outside venues or at designated trading centers. The collapse of the pin trading market will hardly register in the ledger of losses incurred by the Tokyo Games, an enterprise that the country’s organizers say will cost more than $15 billion. About $3 billion of that stems from renegotiating contracts caused by the yearlong delay.

But stuffing the national coffers hasn’t been the point of hosting since the price for throwing the world’s largest gathering started to soar more than a decade ago. Countries vie for the games hoping for the ultimate look-at-me moment, a slick, multiweek advertisement aimed at the entire planet.

Tokyo will get a healthy portion of self-promotion if the games go ahead, which organizers vow will happen despite national polls suggesting that an overwhelming number of people in Japan, who are contending with a prolonged fourth virus wave, would prefer another delay or outright cancellation.

For Olympic goers around the world, these games will be remembered as the party they had to skip. That includes about 250 pin traders, people who plan their lives around the two-year interval between the Summer and Winter Olympics.

Never heard of Olympic pins? They are a portable, wearable bit of promotion and branding for athletic delegations, national Olympic committees, corporate sponsors, news media outlets and cities bidding for the games. (The New York Times makes its own pins and gives a couple of dozen to reporters covering events.)

To the unmoved, the pins are the kind of $7 memento you toss in a drawer or a wastebasket as soon as you return from the games. Thousands of people buy pins, and many spontaneously trade them once they see a trading hive outside a venue. Host countries cater to both casual and ardent fans by producing vast quantities of pins, which are sold at souvenir shops.

Japan was prepared for pin-crazed crowds. The country’s organizers have made 600 different officially licensed pins, a spokesman at the games said, and there are 12 souvenir stores set up around Tokyo.

Now, demand for this bounty is an open question. It’s not just that Japanese fans will be the only ones admitted to the games. Trading is such a hands-on, face-to-face activity that there are worries that it might be discouraged or even banned.

The press office at the games would not comment other than to send along a “playbook,” published in February, outlining safety protocols. Pin trading wasn’t mentioned, but one of the principles stated that attendees should “keep physical interactions with others to a minimum” and “avoid closed spaces and crowds where possible.” That makes pin trading all but impossible.

For years, Kling has been recruited by Coca-Cola to help oversee and manage its pin trading centers, a volunteer position that has made him the unofficial pin czar of the games. Among his many roles is to enforce etiquette and unwritten rules. That means ensuring that tables are shared fairly, counterfeit pins are weeded out and newcomers aren’t overcharged.

“Occasionally I’ll hear an older guy tell a kid, ‘My pin is much bigger, so you need to trade me two for it,’” he said. “We don’t want anyone grinding down an 8-year-old.”

Some are in it for the money. There are more than 80,000 eBay listings for Olympic pins. These speculators had a golden moment in Nagano, Japan, in 1998, when, for reasons that nobody ever explained, the organizers failed to produce enough pins. A trading frenzy ensued. A few people earned $40,000 in a few days. The pin economy had a tulip mania moment.

“Guy I know made a down payment on his house with money he earned in Nagano,” said Sid Marantz, a pin trader who has been to 17 Olympics and is another regular volunteer at the Coca-Cola pin trading centers.

At 76, Marantz is retired from a family business that sold food ingredients, like salt and sugar. He got his hands on his first pin when his parents took him to the 1960 Olympics in Rome. He was a huge fan of Rafer Johnson, an all-arounder out of UCLA who won gold in the decathlon that year.

“I was just swept away by the whole thing,” he said.

He attended his next games in Montreal in 1976 on a tour with Track & Field News, to which he subscribed. That was the first time, he said, that spectators got involved in pin trading on a large scale.

Beyond making new friends, pin trading is about the quest for obscure, hard-to-find treasures. These include pins from African delegations, because they tend to field small teams. (Burundi’s pins are especially prized; the country brought nine athletes to Rio in 2016.)

Any country that has recently changed its name will find itself in the cross hairs of pin traders. That means you, North Macedonia, which will compete at its first games since Greece compelled it to add “North” to its name.

The pins of Japanese media companies have been sought after ever since Nagano, because they are often adorned with cute cartoon mascots.

This time around, though, not even this genre will be hot. Pins from Tokyo 2020 — yes, it’s keeping the name, never mind the actual date — are going to be worth next to nothing, Marantz predicts. Supply is going to swamp demand.